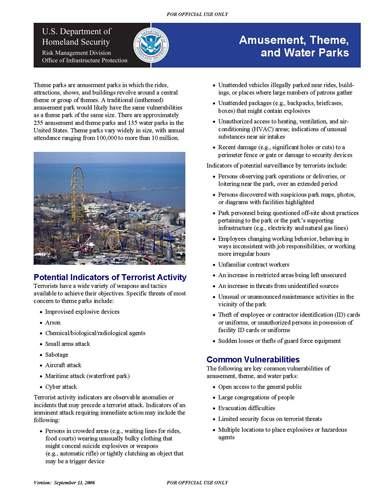 Theme parks are amusement parks in which the rides, attractions, shows, and buildings revolve around a central theme or group of themes. A traditional (unthemed) amusement park would likely have the same vulnerabilities as a theme park of the same size. There are approximately 255 amusement and theme parks and 135 water parks in the United States. Theme parks vary widely in size, with annual attendance ranging from 100,000 to more than 10 million.

Terrorists have a wide variety of weapons and tactics available to achieve their objectives. Specific threats of most concern to theme parks include:

• Persons in crowded areas (e.g., waiting lines for rides, food courts) wearing unusually bulky clothing that might conceal suicide explosives or weapons (e.g., automatic rifle) or tightly clutching an object that may be a trigger device

• Recent damage (e.g., significant holes or cuts) to a perimeter fence or gate or damage to security devices Indicators of potential surveillance by terrorists include:

• Persons observing park operations or deliveries, or loitering near the park, over an extended period

• Park personnel being questioned off-site about practices pertaining to the park or the park’s supporting infrastructure (e.g., electricity and natural gas lines)

• An increase in restricted areas being left unsecured

• An increase in threats from unidentified sources

• Unusual or unannounced maintenance activities in the vicinity of the park

The following are key common vulnerabilities of amusement, theme, and water parks:

− Conduct regular exercises of the plans

− Develop policies and procedures for dealing with hoaxes and false alarms

− Identify and control access by all park employees, vendors, delivery personnel, and contractors

− Establish a protocol for communicating security issues to the public

− Encourage employees, park patrons, and the public to report any situation or suspicious activity that might constitute a threat

− Monitor all persons entering and leaving the park

− Train security personnel to watch for suspicious vehicles near the park; watch for repeat visitors or outsiders who have no apparent business in nonpublic areas of the park; watch for abandoned parcels, suitcases, backpacks, and packages and any unusual activities; and monitor utility supplies and routine work activities scheduled on or near park facilities