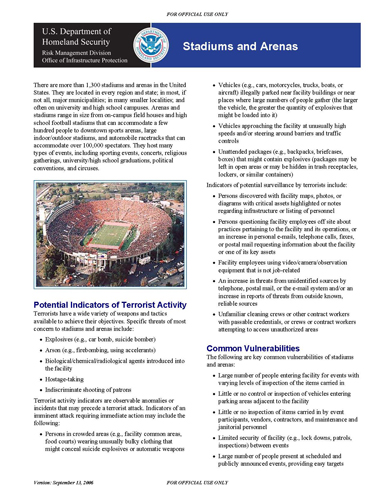 There are more than 1,300 stadiums and arenas in the United States. They are located in every region and state; in most, if not all, major municipalities; in many smaller localities; and often on university and high school campuses. Arenas and stadiums range in size from on-campus field houses and high school football stadiums that can accommodate a few hundred people to downtown sports arenas, large indoor/outdoor stadiums, and automobile racetracks that can accommodate over 100,000 spectators. They host many types of events, including sporting events, concerts, religious gatherings, university/high school graduations, political conventions, and circuses.

Terrorists have a wide variety of weapons and tactics available to achieve their objectives. Specific threats of most concern to stadiums and arenas include:

• Biological/chemical/radiological agents introduced into the facility

• Vehicles (e.g., cars, motorcycles, trucks, boats, or aircraft) illegally parked near facility buildings or near places where large numbers of people gather (the larger the vehicle, the greater the quantity of explosives that might be loaded into it)

• Unattended packages (e.g., backpacks, briefcases, boxes) that might contain explosives (packages may be left in open areas or may be hidden in trash receptacles, lockers, or similar containers)

Indicators of potential surveillance by terrorists include:

• Persons discovered with facility maps, photos, or diagrams with critical assets highlighted or notes regarding infrastructure or listing of personnel

• Persons questioning facility employees off site about practices pertaining to the facility and its operations, or an increase in personal e-mails, telephone calls, faxes, or postal mail requesting information about the facility or one of its key assets

The following are key common vulnerabilities of stadiums and arenas:

• Little or no inspection of items carried in by event participants, vendors, contractors, and maintenance and janitorial personnel

− Maintain an adequately sized, equipped, and trained security force for all events

− Establish a process for controlling access and egress to the facility; including designated, monitored points of entry

− Formally identify gathering areas for tail-gate parties and other such gatherings in locations with natural surveillance and access; make informal areas offlimits and subject to automatic scrutiny

− Ensure that the venue has an intrusion detection system

− At the beginning and end of each event, inspect interior/exterior of facility

− Require screening of all employees, concessionaires, event participants, and delivery and emergency service personnel before they are allowed to enter the facility’s perimeter for special events

− Check outdoor air intakes of heating, ventilation, and air conditioning (HVAC) systems to ensure that they are protected

− Ensure that an emergency power source is provided for critical systems

− Ensure that dumpsters are secured and enclosed

− Minimize the number of people with authorized access to computer systems

− Increase computer security levels to maximum, if not already in place

− Ensure that multiple evacuation routes and rallying points are available

− Assign specific staff members the responsibility of turning off the gas, electricity, water, and alarm systems in the event of an emergency