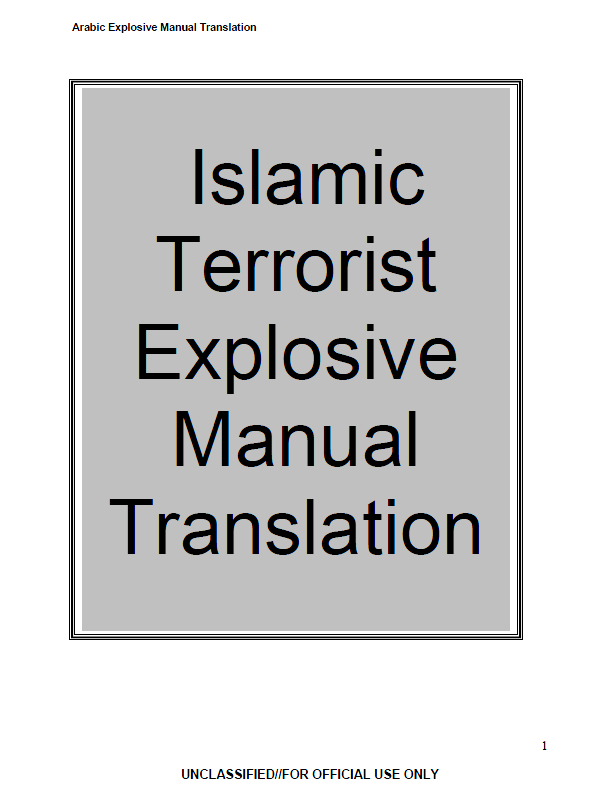 Most of the information has multi purpose use including explosives preparation, civilian
usage of explosives, instructions, ambush, implanting bombs, making different kinds of
bombs, modifying present explosive packages, mixing household chemicals to make bombs,
etc. The authors appeared to be very knowledgeable of the subject matter. They have
extensive knowledge of chemistry and explosives. They could be chemists, pharmacists,
chemical lab technicians, chemistry teachers, researchers, or militants in the army. It is
apparent that they have a college degree and have knowledge of English and computer. Their
names are mentioned several times in these multiple documents. The names are Abu
Mos’sallam, Abu Saqr, Ibn Al Islam, Zain Al Abdedeen, Abu Hamza, Keka, Mobile, and
other aliases.

The file is a combination of several documents related to the same field, and written or
extracted from several sources. The major concept is to teach average people how to make
bombs and how to use them against different targets. It is mostly written for the militant
people in Palestine to target the Israeli army and settlers. It has several sections that discuss
from the basics of explosives to the advancement of urea nitrate, RDX, C4, etc. The last 2
portions of this file contain Q&A and several mixtures (blends) on how to make quick
bombs.

In the Name of Allah, Most Gracious, Most Merciful

Third session: Knowing the Explosives
Before I start, I thank the brothers who requested to insert pictures with the information as much
as possible. I will try to include illustrations or pictures in the manufacturing process.
First: Major Components

1. Mercury Fulminate: One of the mercury salts that has a white color and softy touch. It looks
like very small needles and highly poisonous like the rest of mercury salts. It explodes when
the temperature reaches 180o Celsius and detonates violently if it touches other burned object,
panged, or rubbed. The larger crystals are more sensitive than the smaller ones. Its explosion
speed is 5000 m/s. It dissolves in acetone. It doesn’t dissolve in cold water. If to cold water is
added, this will reduce its danger while in use. It reacts with aluminum to produce a nonexplosive
material. For this reason, it is never stored inside an aluminum container. It is
always stored in copper, glass, or plastic pipes. It can be damaged or discarded by immersing
it in a concentrated solvent of sodium and copper sulfate.

2. Silver Fulminate: One of the silver salts. It has the shape of bright needles and it is more
sensitive than mercury fulminate, and more expensive. For this reason, it is rarely used and in
a very small amount to avoid dangers. Its explosion speed is 1000 m/s.

3. Lead Azide: It a crystal white object that does not dissolve in cold water and dissolves slowly
in boiling water. It sensitivity changes according to the size change of crystals similar to the
mercury fulminate. It reacts with copper to make an explosive sensitive material. Therefore,
it is never stored in a copper container to the opposite of mercury fulminate, and should be
stored in aluminum, glass, or plastics pipes. Moisture doesn’t affect it at all. Its speed of
explosion is 5300 m/s. When exposed to light, its color changes to gray and explodes
spontaneously if exposed to sun of ultra violet ray. Immersing it in a concentrated solvent
through sodium or aluminum acetic will spoil it.

4. Lead Styphnate: Small crystals that have a dark orange color. It does not dissolve in water
and has an explosion speed of 5100 m/s. It dissolves in acetone and used with potassium
chlorates in shock pipes.

They are the explosives used for blowing up, destruction, and sabotage.

1. Trinitrotoluene (TNT): Highly used as a military explosive because of its good quality,
strength, and easy to store and carry. It is density is 1.54 and might reach to 1.64 by pressure
during the melting. It melts at 82o Celsius. It can melt and cast in molds according to the
need. It burns in an open air without causing a flame, and leaving a dark smoke. The pure
one has a white color, and the commercial one has a yellow sand color. Its speed of explosion
reaches 7000 m/s.

Its color changes to brown when exposed to the sun and that affects its strength. It doesn’t
dissolve in water and does not get affected by metals. It is consider a measuring unit to other
explosives.

2. Nitroglycerine: It is an oily liquid that has light yellow color, and assumed to be colorless in
lab purity situation. Its density is 1.59 and it doesn’t dissolve in water. It dissolves in all
organic compounds (chloroform, benzene, olive oil, acetone, ether, phenol, etc.). It freezes at
8o Celsius and melts at 11o Celsius, and has 8000 m/s speed of explosion. The sun affects it
badly. It is very dangerous and might explode by shaking or exposure to normal temperature.
It is stored in cold and many restraints can be added like wood sawdust and flour to reduce its
sensitivity. It can be disposed by immersing it in a concentrated sodium solvent.

3. Dynamite: There are three kinds of dynamite. The available one now is one kind that
contains nitroglycerine and nitrocellulose, ammonium nitrate, and constraints in different
percentages. It has many commercial names and it is soft, yellow, dough like material that
could be shaped and cut by hand only. Do not use any sharp tool to cut it. Its speed of
explosion is 7500 m/s after 45 days of manufacturing. If stored for a long time, nitroglycerine
starts to separate from the mixture, and becomes very dangerous and can notice that by
seeing oily spots on the cover or on the surface. In this case, it must be disposed immediately.

♦ It could be disposed as follows: sand and filter dusts are spread in a flat shape in the
same direction of wind, and in the open air and isolated area. The dynamite is placed
after unwrapping it very carefully sticking to sand base, and is ignited through a slow
cord after the withdrawal of everybody to a safe place. If the wind direction doesn’t
change, it will burn normally. But, if the wind direction changes, or becomes
stagnant, the rise of flame temperature above it will cause a resound explosion.
Therefore, a complete caution has to be taken.

4. Soft Plastic Explosives (Paste or Dough): They were manufactured to substitute the
dynamite. They have the capabilities to destruct, demolish, form, and to stick to the targets.
They are stronger than TNT and used broadly in the civilian and military sectors. They are
two kinds, C3 and C4. The first one is (C3), which is a yellow paste and affected by
moisture. Long time storage causes the loss of its dough (paste) ability, and becomes easy to
break. Its strength is 1.34 of the TNT (this means 1.34 x 7000 m/s). The second one is (C4),
which is a white cotton dough shape and little bit affected by moisture. Its strength is 1.4 of
the TNT strength.

5. Gellgenett: it is the strongest military explosive, and it is a mixture (blend) of C3 and C4 in a
specific percentage.

Third: Explosives that have High Temperature

1. Ammonal: It is a highly explosive compound that contains a mixture (blend) of ammonium
nitrate, aluminum dust, and TNT with the following percentages: 22  11  67 % in
sequence. It explodes causing a brightness and high temperature. Substitute in the United
States with another compound called Tritonal, which is a mixture (blend) of 80% TNT and
20% aluminum sand.

2. Amatol: It is a mixture (blend) that has a good reaction with ammonium nitrate and TNT. Its
explosion speed is less than TNT, which makes it more flammable.

1. RDX: It is the strongest and effective explosive. It has a solid structure and looks like
crystals similar to the table salt. Its explosion speed is 8387 m/s. It is very sensitive to
impacts, and ignites by heat and explodes at 196o Celsius. It is used in detonators’ industries
and as an activator with the initiators. It is included in several essential explosives.

2. PETN: It is very soft white granulates that is used in making explosive cord (cortex). Its
explosive power is 1.7 of TNT, very sensitive to banging, and ignites by a flame.

3. Picric Acid: It is very soft yellow granulates and extremely sensitive to temperature, friction,
and impact (bang). It dissolves in water and is considered the official military explosive in
France. 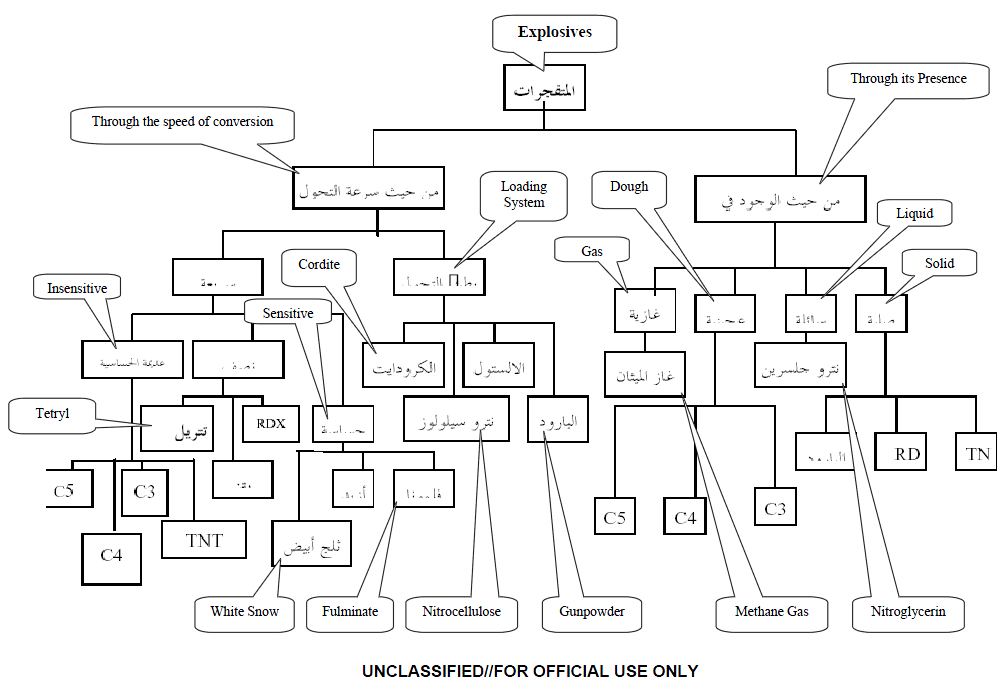 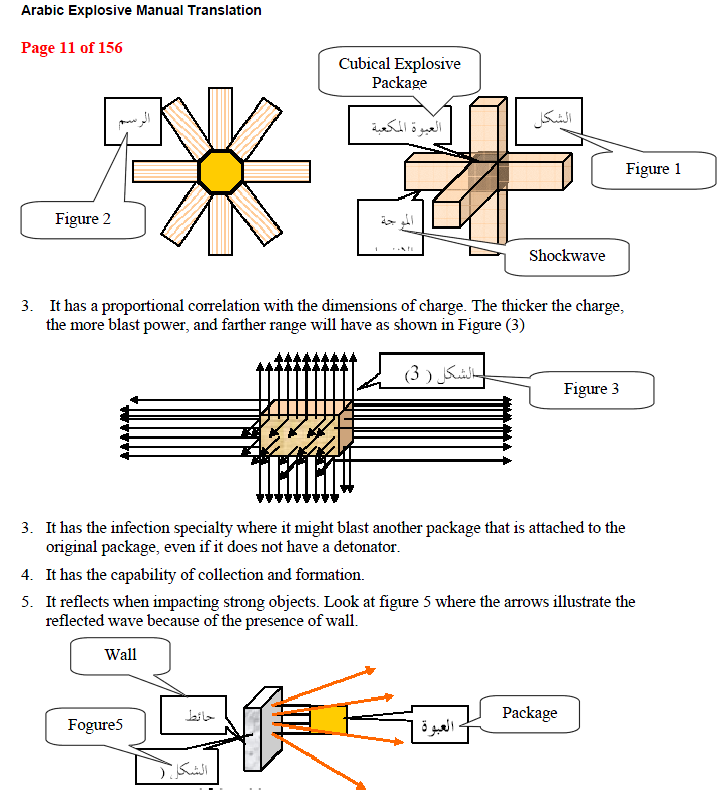 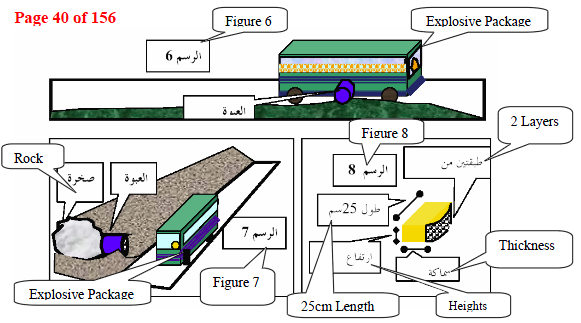