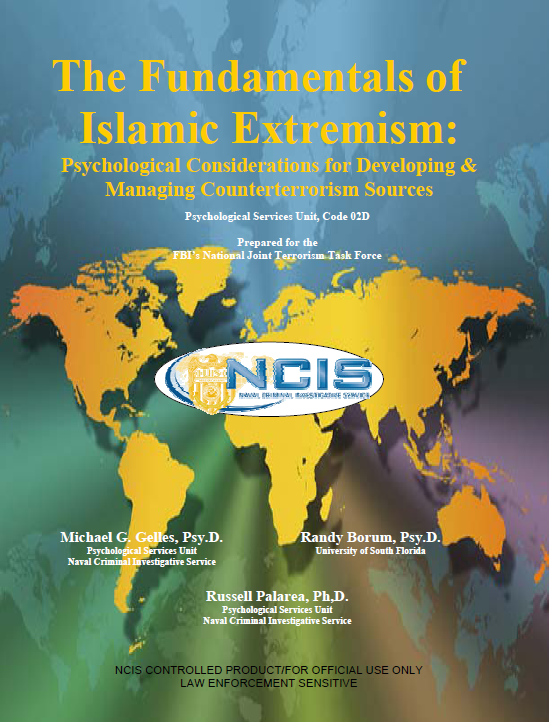 Following the events of September 11, 2001, the US intelligence and law enforcement communities began a fundamental shift in counterterrorism strategy to enhance national safety and security by changing from a reactive to a proactive posture. The communities have actively moved to identify potential threats and develop intelligence on specific terrorist targets. The core objective of these newly concentrated efforts is to reduce risks and manage potential threats by interrupting forward motion before an attack (Borum, 2004a). The ongoing Global Struggle Against Violent Extremism intensified the need for persons and agencies with counterterrorism responsibilities to understand the commitment, connections, capability, and intentions of Islamic extremists – including the Al-Qa’ida affiliated network – so that viable operations targeting terrorist cells can be developed. Ideally, these efforts involve source operations in which someone willing to provide information to US authorities penetrates an operational cell, or where someone with access to the cell is recruited to work for US authorities. In either case, the goal of a source operation is to collect information related to the cell’s recruitment practices, capability, and plans for attack. Counterterrorism operations are difficult, complex, and aggressive but, when successful, they produce vital information. They reflect a proactive emphasis in strategic response to an ongoing and ambiguous threat.

In the counterterrorism community, the Global Struggle Against Violent Extremism has led to a surge in threat warnings, investigations, arrests, and interrogations. As a result, the community has collected significant intelligence and gained greater insight into the Al-Qa’ida affiliated network and their known practices and methodologies. An opportunity exists to apply this knowledge in initiating proactive operations. Proactive operations that lead to strategic, preventive interventions are a far better use of resources than responding to threat alerts and conducting post-attack investigations. There is no substitute for the invaluable information derived by a source embedded in the daily activities of a targeted group. The source becomes the eyes and ears of the law enforcement and intelligence community.

In this paper, we identify and describe several psychological considerations that may affect source development and management. While a host of factors will influence any operation, we focus here only on the psychological factors that we believe may be useful to Special Agents engaged in counterterrorism operations. This is but one portion of the larger operational structure. For a more expert view of the Islamic extremist adversary and the contexts in which they operate, we recommend seeking input from counterterrorism intelligence analysts.

Understanding Jihad: The Path to Commitment

The concept of jihad is central to many Islamic extremist ideologies and justifications for violence (Euben, 2002). The meaning of that term, however, has been a matter of considerable debate (Gould, February, 2005). The term “jihad” has its roots in the Arabic verb “j-h-d,” whose meaning generally is interpreted as “to endeavor, strive, labor, take great pains.” The noun form generally refers to a struggle. According to some, it typically connotes a great effort in the struggle to maintain the straight path of Islam. However, Bernard Lewis (2003), eminent historian of Islam and the Middle East, notes that the concept of jihad in the great majority of the Arabic language and Islamic writings refers to a religious duty to take action against infidels or non-believers, for the sake of God Almighty (Allah). Other Islamic scholars also support Lewis’ contention that in orthodox –not even extremist – usage, jihad almost always refers to the duty to fight against “the enemies of Islam.”

Modern day Islamic extremists such as Usama bin Ladin have been profoundly influenced by the notion that jihad is a “neglected duty” (i.e., jihad al-farida algha’iba); an idea inherited from earlier Egyptian Islamist philosophers of the 1950-60s, such as Sayyid Qutb and Muhammad Al-Farraj (Jansen, 1986). Qutb and Al-Farraj asserted that after faith in God (iman) and the belief in only one true God (tawhid), there is no more important duty for all Muslims than jihad against the unbelievers (Lewis, 2003). It is important to note here that this principle (i.e., that there is a duty mandated by God to kill or destroy all “unbelievers”), which is the centerpiece of Islamic extremist doctrine, is a relatively new development in Islamic history. While the faith of Islam has existed for more than 14 centuries, this violent strain of Islamist ideology has only held a sizable audience for less than a century. Jihadism is a modern phenomenon (Pipes, September 23, 2004).

In the current international security environment, there is consensus among US counterterrorism experts and policymakers that Sunni extremism – driving a call to wage jihad – currently poses the greatest threat to Western interests (National Commission on Terrorist Attacks Upon the United States, 2004). The voice of these extremists is most aptly represented in the words and deeds of Al-Qa’ida and its affiliated network, and of men such as Usama bin Ladin, Ayman al-Zawahiri, and number of lesser known extremist shaykhs. These groups, and the men behind them, have a rigid, narrow view of Islam and lack any tolerance for those whose beliefs diverge from them. They oppose Jews, Christians, and even less strident Muslims (Borum & Gelles, 2005). Their exclusive rigidity and fundamentalism alone, however, are not sufficient to give rise to a security threat. Rather, the threat arises from the belief that they have a duty to wage holy war against, and violently exterminate, all persons who do not share their beliefs.

The world of the Islamic extremist is starkly divided between “us” and “them.” The progenitors of this ideology, including Sayyid Qutb, Muhammad ‘Abd Al-Salam Al-Farraj, and ‘Abdallah Azzam, as well as their contemporary counterparts such as Usama bin Ladin, believe two competing forces seek to dominate the condition of the world. Since the time the Qur’an was revealed to the Prophet Muhammad, the states of Dar Al-Islam (the abode of Islam) and Dar Al-Harb (abode of war or conflict) have been in conflict, and will remain so until the end of time (Lewis, 2003).

Islamic extremists believe that the world currently exists in the state of Dar Al-Harb. In this condition, true believers of Islam are ostensibly impelled to wage defensive jihad in order to reclaim lands once under the control of pious Muslims. These territories include parts of Spain and other areas of Europe “up to the gates of Rome,” and, of course, Israel. Once Muslims reclaim the land, then the struggle (jihad) moves to an offensive mode of conquest to ensure that the remainder of the world is safe for Islam. In recent times, the US has been viewed as the primary villain within the Dar Al-Harb because Al-Qa’ida and recognized Sunni religious leaders believe the US has sided and conspired “against Muslims” in numerous conflicts around the world (e.g., Israel, East Timor, Serbia, South Philippines, etc.; Lewis, 2003).

We explain these issues here because in source operations targeting Islamic extremists, Special Agents will benefit from understanding the source’s mindset and the history associated with his thinking, commitments, and beliefs. This will empower the Special Agent to better manage the source and understand the intentions of the target. Without knowing the history embedded in the adversary and source’s mindset, it becomes more difficult to interpret and manage his behavior, motivation, and intentions during the operation.

It is also important to understand the source’s cultural identification and adaptation. We have found that individuals who have lived in the West for a considerable period of time have a more in-depth understanding of Western culture. However, they still retain a strong affiliation and identification with their country of origin. Cultural differences may affect mutual expectations and modes of interaction (Saraswati, 2004). Sources of Middle Eastern descent who have been “Westernized” may have adapted to a more linear way of thinking (at least in comparison to their foreign national counterparts). In some cases, these adaptations will make their tasking, debriefing, and overall management easier, but in other cases more difficult, depending on the source’s relationship with the Special Agent, target, and overall motivation to participate in the operation.