Artwork from the CIA Museum

The following photos depict various pieces of art held in the CIA Museum at CIA Headquarters in Langley, Virginia.  The museum’s collection, interestingly, seems to hold only one abstract art piece by artist Gene Davis who was known for paintings featuring striking sets of colorful vertical lines.  Captions are provided by the CIA. 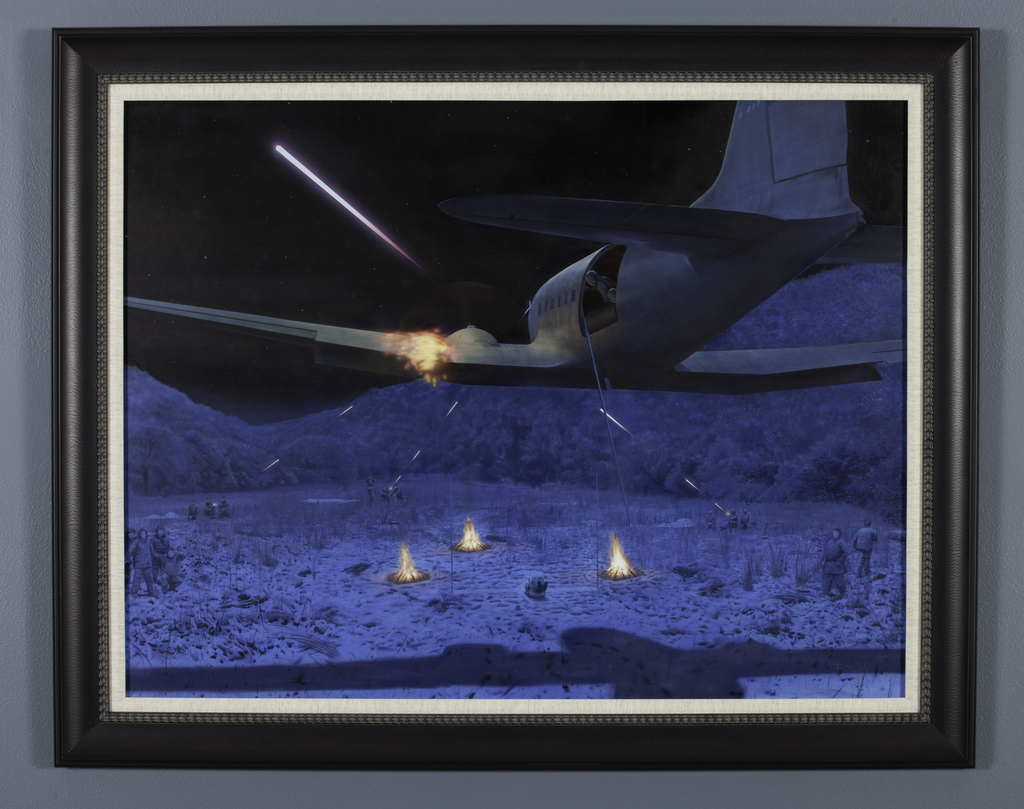 November 1950 marked the entry of Chinese Communist military forces into the Korean War. The Truman Administration tasked CIA to conduct covert-action programs on the Chinese mainland. One particularly sensitive and dangerous one involved CIA’s Civil Air Transport (CAT) flying agent-exfiltration missions in which low-altitude, slow-moving planes hoisted agents from the ground. The painting depicts an ill-fated flight on November 29, 1952 when Norman A. Schwartz and C flew such a mission into Manchuria, unaware that Chinese Communist units had been tipped off about the flight and were waiting in ambush. Their plane was shot down, and they were killed. Their two crewmen, John T. Downey and Richard G. Fecteau, however, were not seriously hurt. They were convicted of espionage and imprisoned. Fecteau was eventually released nearly a year shy of his 20-year sentence, and Downey was released after serving just over 20 years of his life sentence. "Ambush in Manchuria" Dru Blair/Mixed Media on Illustration Board, 2010/Donated Courtesy of Alan Seigrist 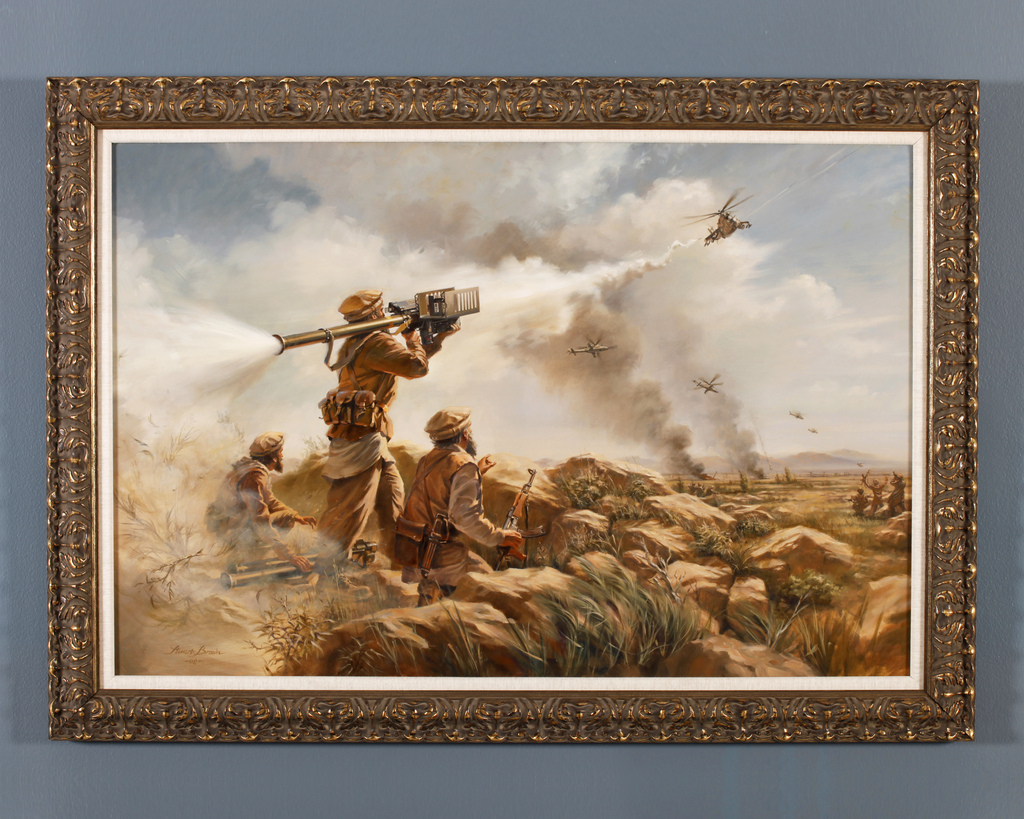 First Sting depicts the turning point in the Afghan war with the first of many shoot-downs of Soviet helicopter gunships by Mujahedin fighters armed with Stinger missiles. "First Sting" Stuart Brown/Oil on Canvas, 2008/Donated Courtesy of Richard J. Guggenhime and Donald Elster 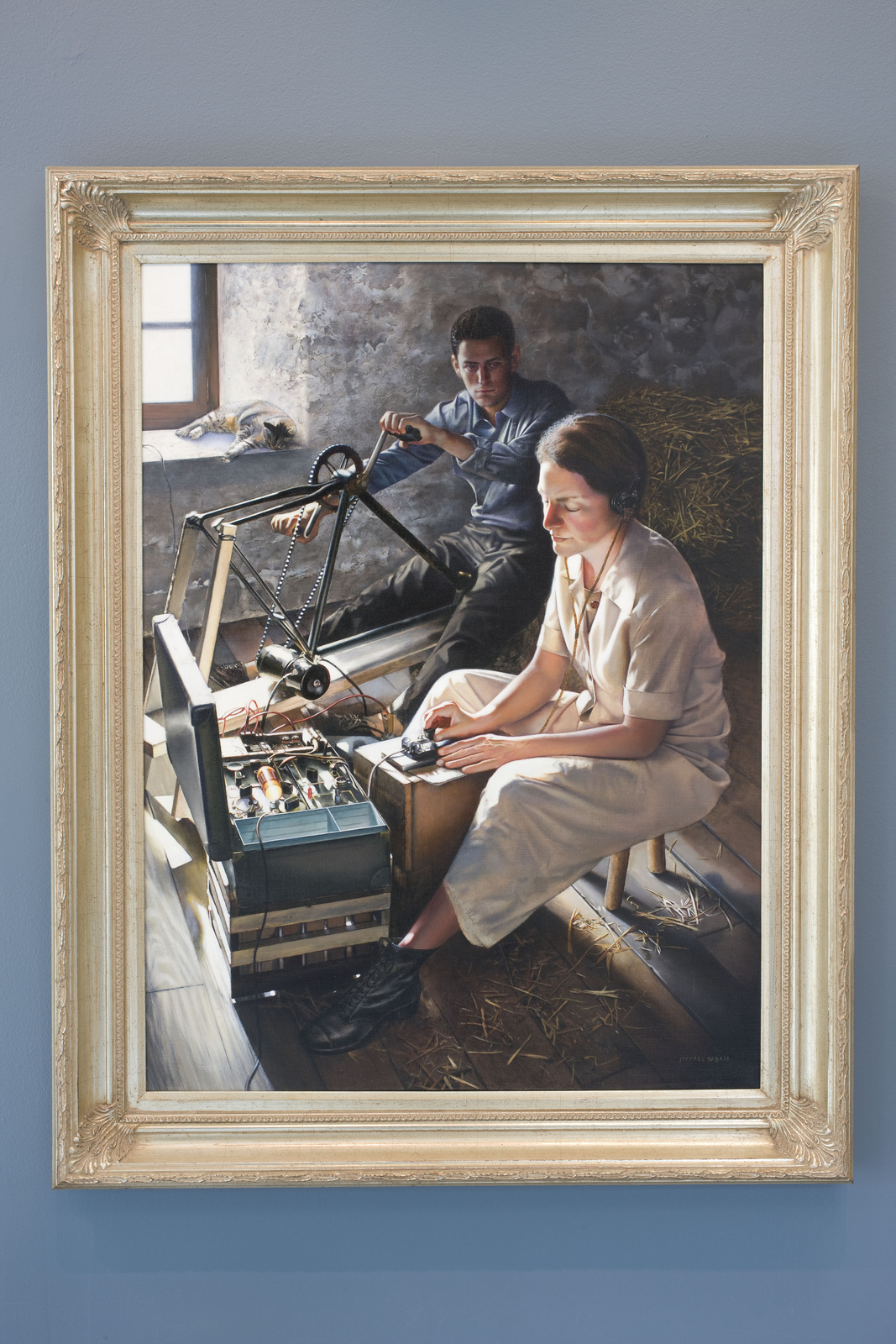 When France fell under the Nazi boot in June 1940, Great Britain stood alone against the enemy. Fearing a similar fate for his country, Winston Churchill created the Special Operations Executive (SOE), an organization specializing in irregular warfare against German forces in occupied countries. SOE’s early recruits for espionage operations were from a variety of people from all classes, pre-war occupations, and countries—including a 35-year-old American woman by the name of Virginia Hall from Baltimore, Maryland. Hall had seen the Nazi devastation in France firsthand and was eager to do her part to defeat fascism. She underwent SOE’s rigorous preparation, remarkably, not because she was a woman, but because her left leg was made of wood, the result of a below-the-knee amputation necessitated by a pre-war hunting accident. "Les Marguerites Fleuriront ce Soir" by Jeffrey W. Bass Oil on Canvas, 2006/Donated by Richard J. Guggenhime 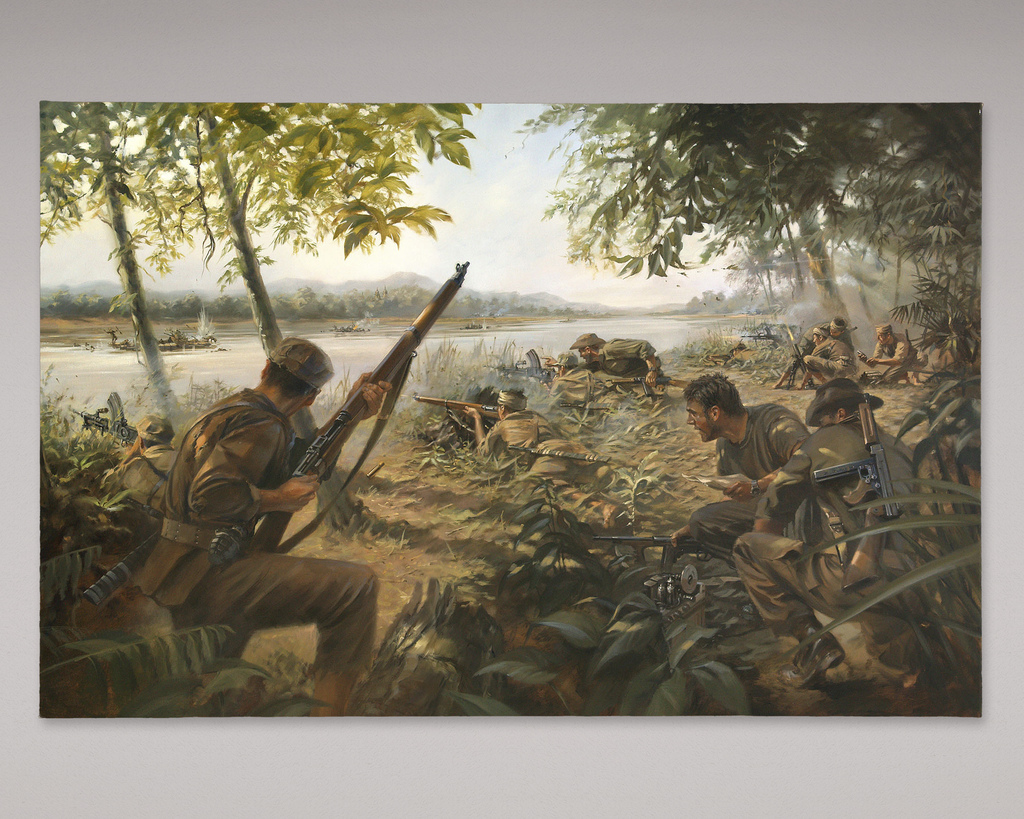 The painting depicts one of OSS Detachment 101’s many guerrilla operations staged to disrupt Japanese supply and reinforcement routes in Burma. Staked out on one side of the Irrawaddy River, OSS-trained Kachin rangers ambush Japanese rafts bringing troops and supplies to the Japanese-held town of Myitkyina in July 1944. Such actions helped lead to the Allied re-capture of the town and, ultimately, the defeat of Japanese forces in northern Burma. By the time of its deactivation in July 1945, OSS Detachment 101 had amassed an impressive list of accomplishments, performing against overwhelming enemy strength and under the most difficult and hazardous conditions. The courage and fighting spirit of the Kachin guerrillas and their American advisors earned Detachment 101 a Presidential Unit Citation and recognition as the “most effective tactical combat force” in the OSS. "Irrawaddy Ambush" Stuart Brown 2010 Oil on Canvas/Donated Courtesy of Michael DeSombre 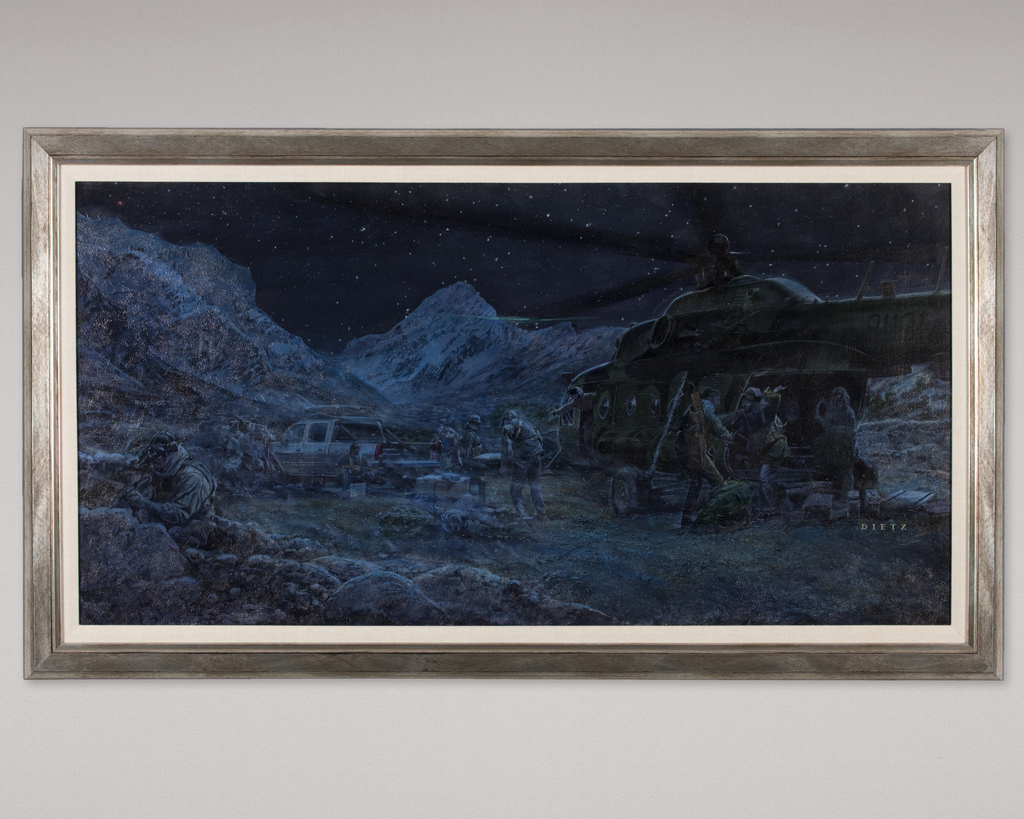 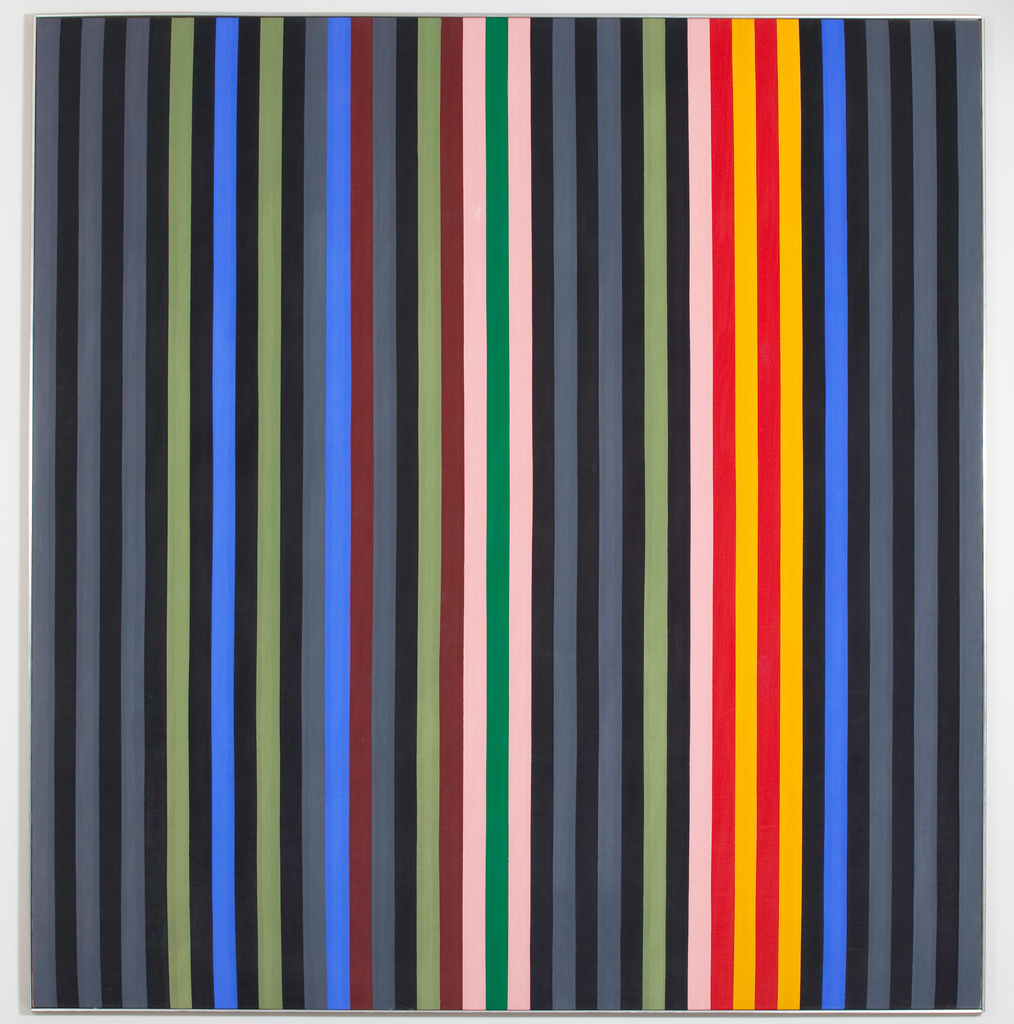 This is the Agency’s only work by Gene Davis, one of the most noted of the Washington Color School artists. In a conscious effort to “purify” his work, he reduced painting to the fewest possible elements, that of equal-width stripes. He felt that this matrix allowed him to emphasize color orchestration, saying: “I paint by eye as a jazz musician plays by ear.” The stripes, like a drummer’s beat, provide the unity through which colors interact. Such a painting cannot be grasped all at once: Davis suggested that the viewer follow one color across the composition, seeing how the intervals work, what the rhythms are like between related colors. He described it as a kind of syncopation. A Washington native, Davis was a sports writer and a White House correspondent before he dropped that career to become a painter. "Black Rhythm" Gene Davis c.1964/Vincent Melzac Collection Washington Color School 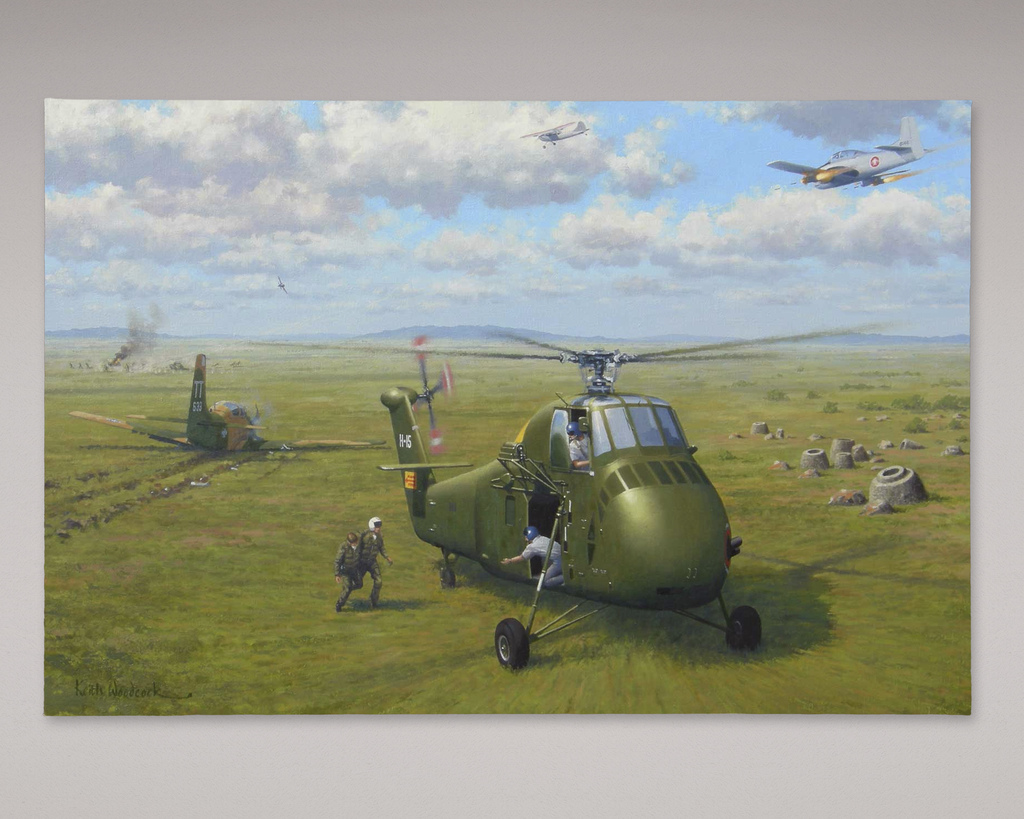 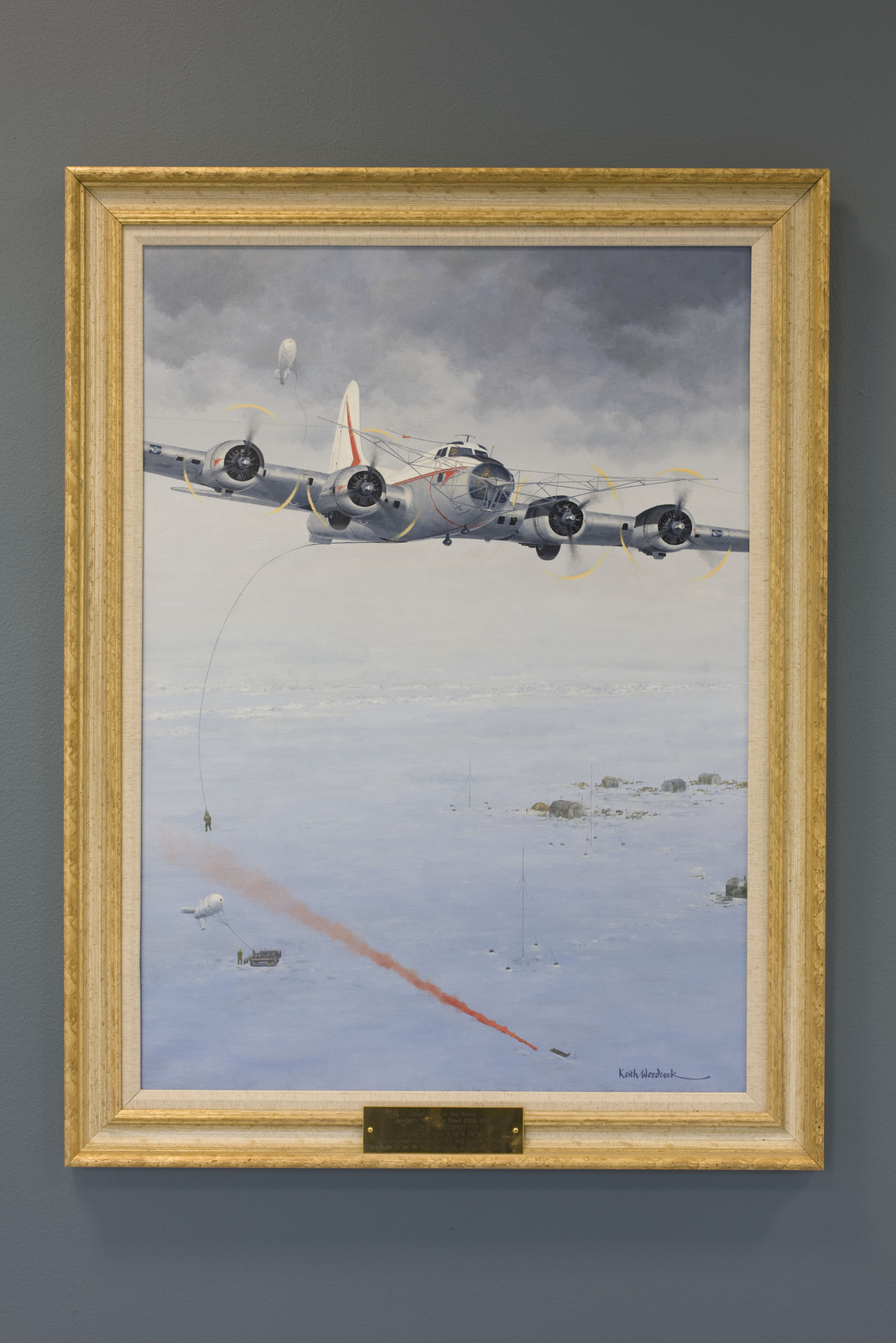 The painting depicts an Intermountain Aviation B-17 successfully catching Lt. (jg) Leonard A. LeSchack, USNR while Maj. James F. Smith, USAF, waits at the NP8 pickup point marked with red smoke. The 7-day mission in 1962 yielded valuable intelligence on Soviet advanced acoustical detection of under-ice submarines and Arctic anti-submarine warfare techniques—thanks to the persistence, courage, and resourcefulness of that small team of dedicated professionals who planned and executed this remarkable feat. "Seven Days in the Arctic" by Keith Woodcock Oil on Canvas, 2007/Donated by Gar and Audrey Thorsrud 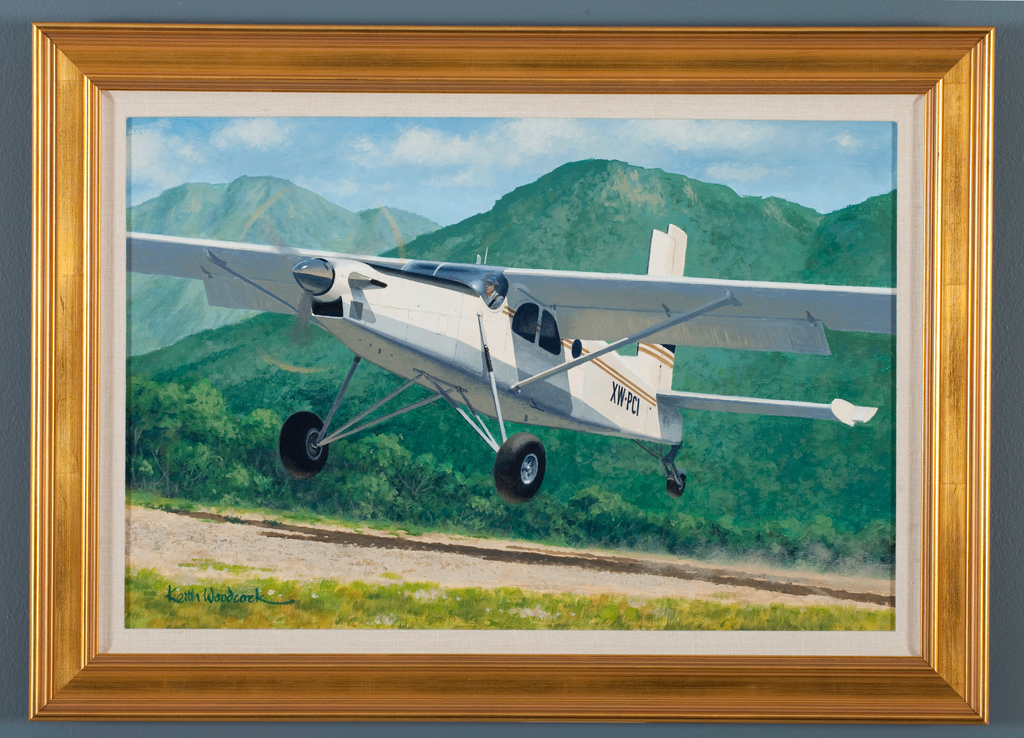 Continental Air Service, Inc. (CASI) provided essential contract flying during the war in Southeast Asia in support of the CIA and other US Government organizations. Included in CASI’s fleet was the Pilatus PC-6 Turbo Porter depicted in the painting. This single-engine turboprop aircraft was known for its unique STOL (short takeoff and landing) capability, making it ideal for “up country” missions operated from primitive dirt landing sites, often flying in poor weather, with few navigational aids, under the constant threat of enemy fire, and in the midst of towering mountains and unforgiving karst formations. CASI played a vital role during the war, delivering food, medicine, and other essential supplies to isolated outposts as well as rescuing downed airmen throughout the war-torn Lao Kingdom. CASI pilot Lee Gossett flew his trusty PC-6 Turbo (shown in the painting with Lao registration XW-PCI) during the late 1960s and early 1970s, fondly recalling, “The old girl brought me home every night.” The painting is a tribute to this historic aircraft and CASI’s support to CIA operations in Southeast Asia. "Continental Air Service's Pilatus Turbo Porter Landing Up Country in Laos, 1969" Keith Woodcock Oil on Canvas, 2010/Donated Courtesy of Owen Lee Gossett