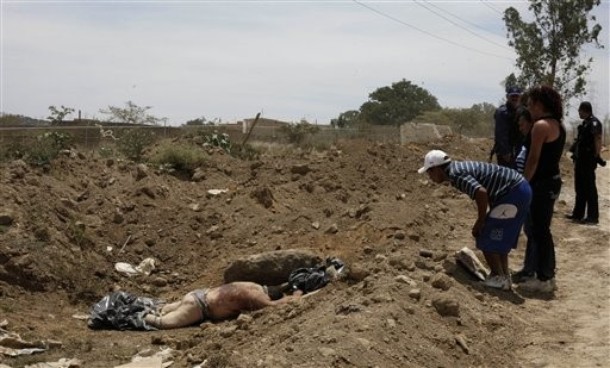 A man looks at a body of an unidentified man who found dead with his arms and legs tied together by the side of a dirt road in Zapopan, on the outskirts of Guadalajara, Mexico Monday, May 24, 2010. No official information from the Guadalajara police has being released yet on the case.(AP Photo/Carlos Jasso) 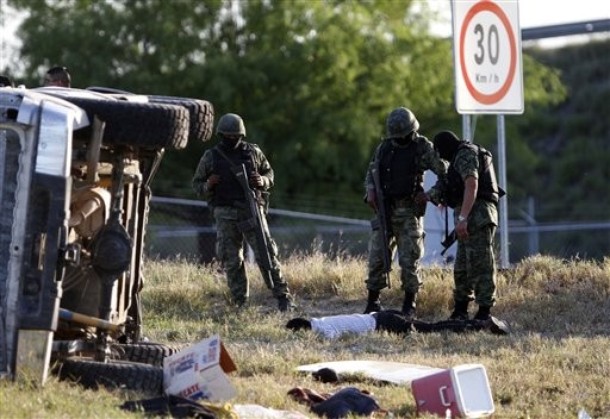 Soldiers stand over the body of a suspected hit man lying next to his overturned vehicle after a shootout in the municipality of China on the outskirts of Monterrey, Mexico, Tuesday, March 30, 2010. According to the army, two suspected hit men were killed during a shootout with soldiers along the highway to Reynosa after refusing to stop at a military checkpoint. (AP Photo/Claudio Cruz) 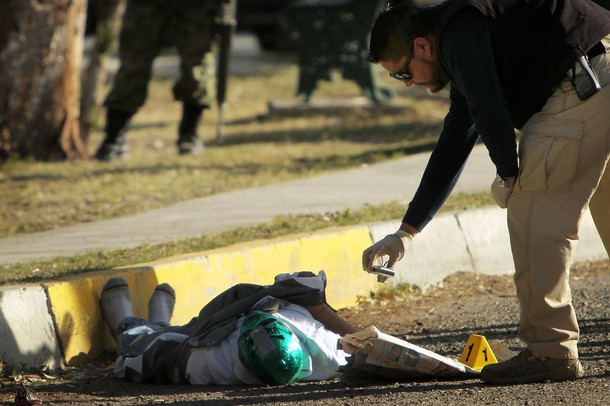 A criminal investigator takes a picture of a body with a mask in the street, one of numerous murders over a 24 hour period, on March 26, 2010 in Juarez, Mexico. Secretary of State Hillary Rodham Clinton, Defense Secretary Robert Gates, and Homeland Security Secretary Janet Napolitano all visited Mexico on March 23 for discussions centered on Mexico's endemic drug-related violence. The border city of Juarez, Mexico has been racked by violent drug related crime recently and has quickly become one of the most dangerous cities in the world to live. As drug cartels have been fighting over ever lucrative drug corridors along the United States border, the murder rate in Juarez has risen to 173 slayings for every 100,000 residents. President Felipe Calderon's strategy of sending 7000 troops to Juarez has not mitigated the situation. With a population of 1.3 million, 2,600 people died in drug-related violence last year and 500 so far this year, including two Americans recently who worked for the U.S. Consulate and were killed as they returned from a children's party. (Photo by Spencer Platt/Getty Images) 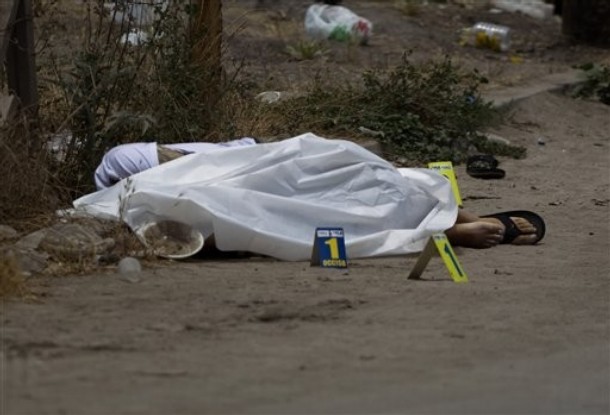 The body of a man lies dead on the street covered with a plastic sheet after being shot by unknown gunmen on the outskirts of Tijuana, Mexico, Friday, July 9, 2010. According to police at the scene gunmen shot against four men outside a house, killing three and injuring one.(AP Photo/Guillermo Arias) 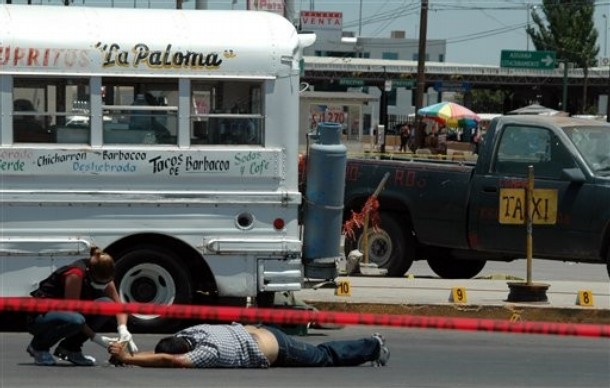 A forensic expert examines the body of a man that was killed by unknown gunmen near the international bridge in the northern border city of Ciudad Juarez, Mexico, Friday, May 28, 2010. According to the spokesman for the Chihuahua state prosecutors' office, five men were riding in a car when gunmen drove up beside them and opened fire.(AP Photo) 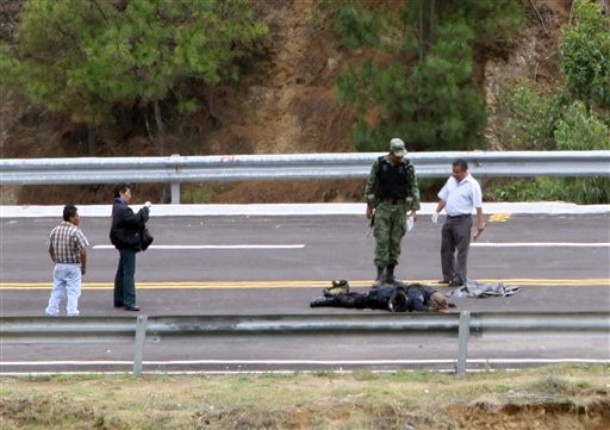 Crime scene investigators and a Mexican army soldier stand over the body of a fallen federal policeman after an ambush on a patrol of federal agents near the town of Zitacuaro, Mexico Monday June 14, 2010. Mexican federal police say 10 of their officers were killed in the attack and several others were wounded.(AP Photo/Agencia MVT-Crisanta Espinosa) 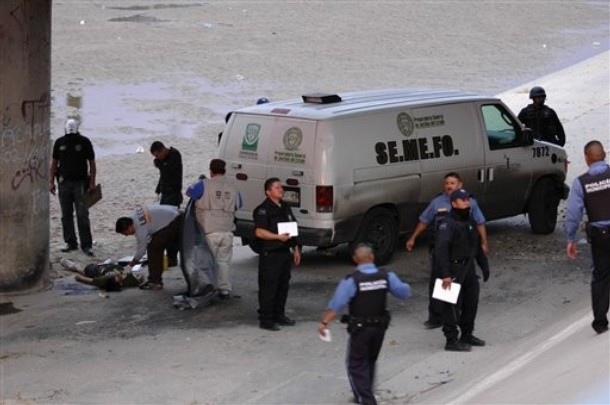 Mexican forensic experts examine the body of 14 year-old Sergio Adrian Hernandez Huereca under the Paso Del Norte border bridge in the city of Ciudad Juarez, Mexico Monday June 7, 2010. Chihuahua State officials released a statement Tuesday June 8, demanding a full investigation into the death of the boy who was allegedly shot by a U.S. Border Patrol agent after a confrontation, according to Mexican authorities.(AP Photo) 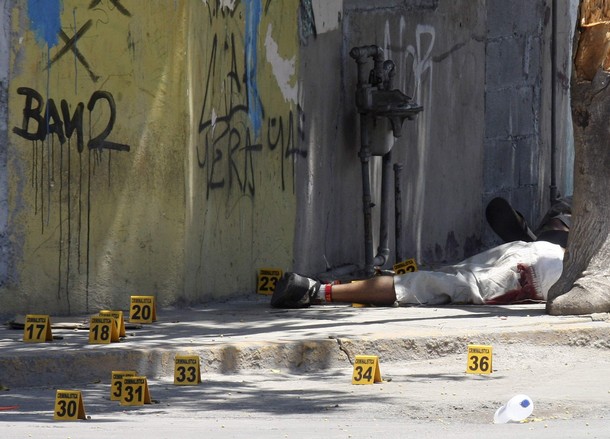 The bodies of two dead men are seen on a street after gunmen shot at them in Monterrey, June 16, 2010. A rift between drug gangs near the U.S. border is terrifying Mexico's richest city Monterrey, once a poster child of development, forcing a quarter of its export factories to freeze investment. A gruesome war between Mexico's powerful Gulf cartel and its former armed wing, the Zetas, has killed a record 290 people in Monterrey and surrounding areas since the start of the year, when the two groups split and bloodshed escalated. Picture taken June 16, 2010. REUTERS/Kristian Lopez 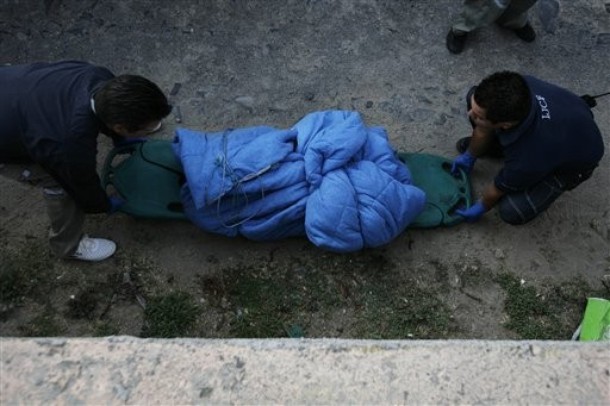 Forensic experts carry a stretcher with the allegedly mutilated body of a drug gang member wrapped in a blanket after it was found in Tlajomulco on the outskirts of Guadalajara, Mexico, Friday, May 28, 2010. According to the police a message to an alleged rival gang was found next to the body. (AP Photo/Carlos Jasso) 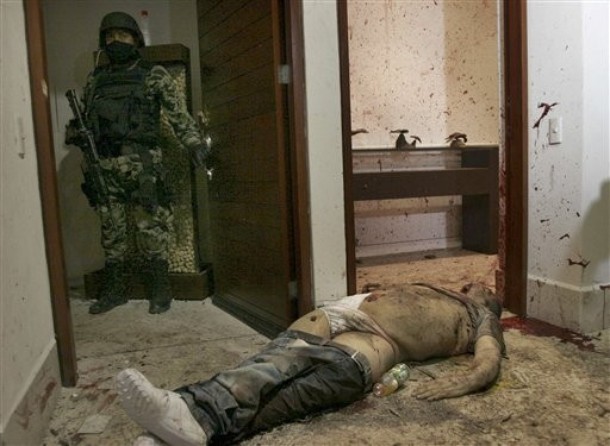 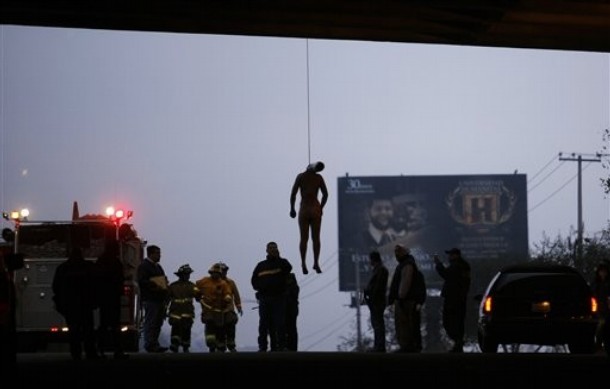 The body of an unidentified man hangs from his neck under a bridge on the old Rosarito highway as authorities stand by in Tijuana, Mexico, Friday, Oct. 9, 2009. Authorities found the dead man beaten, naked and castrated, and have not identified him but believe he is Rogelio Sanchez, a Baja California state government official who went missing this week. No suspects were named. The homicide is characteristic of Mexico's brutal drug gangs, which often dump mutilated victims in public places. (AP Photo/Guillermo Arias) 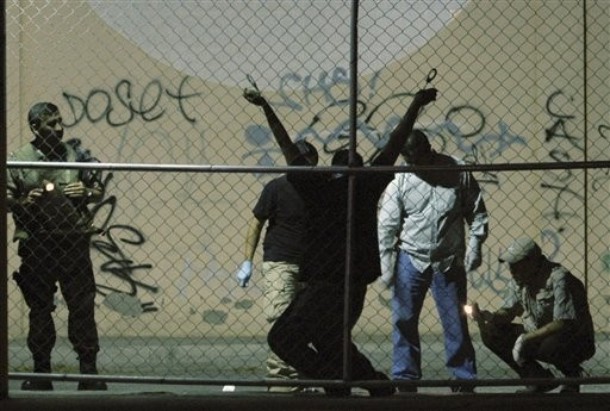 Police and army soldiers inspect the site where a dead man hangs from his wrists handcuffed to a fence in a night club parking lot in the border city of Ciudad Juarez, Mexico, late Monday, Aug. 31, 2009. The body was found in the same place where eight others were executed a few weeks ago. (AP Photo) 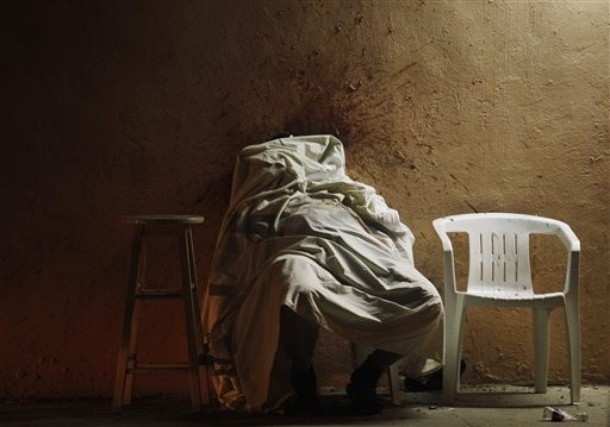 The body of an alleged drug dealer is seen covered by a sheet after being shot to death in front of his house in Tijuana, Mexico, in this Sept. 6, 2009 file photo. (AP Photo/Guillermo Arias, File) 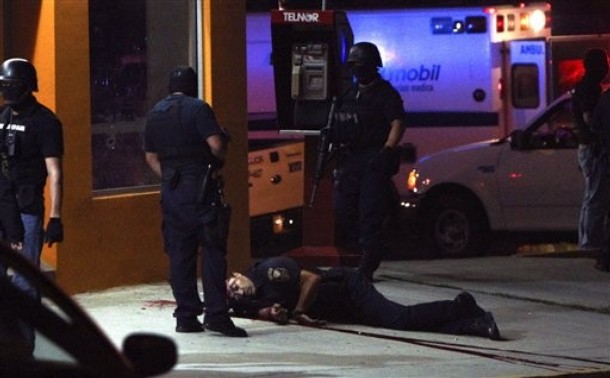 Police officers surround the body of a coworker killed during a shooting with alleged drug traffickers in Tijuana, Mexico, late Friday, Sept. 18, 2009. According to local authorities, three police officers were killed and one was wounded during the shooting. (AP Photo) 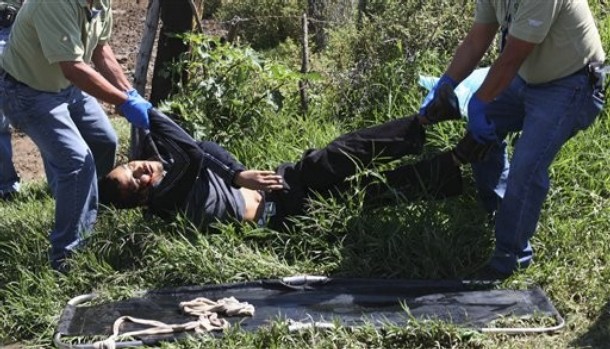 Police officials move the body of an unidentified man who was killed on the outskirts of Guadalajara, Mexico, Thursday, Sept. 17, 2009. According to the local media reports, the body was accompanied with a note alluding to the Mexican drug cartel Los Zetas. (AP Photo/Carlos Jasso) 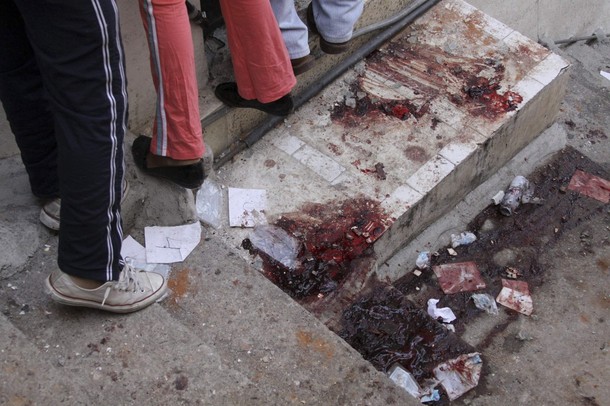 People stand next to a puddle of blood while peeking into a house where 15 suspected drug gang members died in a shootout with Mexican soldiers in Taxco June 15, 2010. Suspected drug hitmen attacked soldiers who were intending to inspect a cartel safe house in the colonial town of Taxco southwest of Mexico City. Soldiers returned fire, killing the assailants in a 40-minute gunfight, the defense ministry said in a statement. REUTERS/Margarito Perez