An intelligence assessment from the Department of Homeland Security demonstrates law enforcement’s growing fear of violence from “anti-government” extremists emboldened by the recent standoff at the Bundy Ranch in Nevada.

An intelligence assessment released July 22 by the Department of Homeland Security Office of Intelligence and Analysis warns of an increasing trend of “anti-government violence” from what are described as “domestic violent extremists” inspired by the recent standoff at the Bundy Ranch in Bunkerville, Nevada.  The report, titled “Domestic Violent Extremists Pose Increased Threat to Government Officials an Law Enforcement,” was originally obtained and published by Public Employees for Environmental Responsibility, a non-profit alliance of local state and federal resource professionals that has been advocating for criminal charges against Cliven Bundy and “militia snipers” involved in the April standoff with the Bureau of Land Management.  In recent months, the report suggests that there has been a notable increase in violence from domestic extremists motivated by “anti-government ideologies.”  Compared to the previous four years, DHS assesses that the “perceived victory by militia extremists in a show of force against the Department of Interior’s Bureau of Land Management (BLM) will likely inspire additional anti-government violence over the next year.”  The report reflects a current trend in the national law enforcement community that views the rise of domestic extremist groups, variously referred to as militia or anti-government extremists as well as sovereign citizens, as a significant threat to the safety of government officials, law enforcement and first responders.  In fact, a recent survey conducted by the National Consortium for the Study of Terrorism and Responses to Terrorism (START) at the University of Maryland found that law enforcement throughout the country identifies sovereign citizens as the top terrorist threat, greater even than the threat posed by Islamic extremists.

Domestic Violent Extremists and The Victory at Bunkerville

Though law enforcement agencies have been warning for years of the potential for violence perpetrated by members of the so-called sovereign citizen movement, who believe that the U.S. government is “operating outside of its jurisdiction and generally do not recognize federal, state, or local laws, policies, or governmental regulations,” the DHS’ recent assessment does not focus on members of this group.  Instead, the assessment focuses on domestic violent extremists motivated by “anti-government ideologies” and a common perception of “government overreach and oppression.”  Unlike sovereign citizens, these groups and individuals “recognize government authority,” however they may engage in acts of violence due to “their perception that the United States Government is tyrannical and oppressive” and “needs to be violently resisted or overthrown.”  The assessment also refers repeatedly to “militia extremists” who are defined as facilitating or engaging in acts of violence “directed at federal, state, or local government officials or infrastructure in response to their belief that the government deliberately is stripping Americans of their freedoms and is attempting to establish a totalitarian regime.”  These individuals often “oppose many federal and state authorities’ laws and regulations (particularly those related to firearms ownership), and often belong to paramilitary groups.”

The DHS assessment finds that a “recent spike in anti-government attacks and plots since November 2013” is a departure from the previously sporadic occurrence of “domestic extremist violence.”  The increase is believed to be motivated by “perception of government actions (or lack of action) addressing political issues such as gun control, land-use, property, and other activities as interfering with their individual rights and as oppressive measures that warrant violent reprisal against US Government entities and law enforcement.”  Historically, spikes in violence have followed “high-profile confrontations” involving the U.S. government including Ruby Ridge and Waco.  DHS identifies the recent standoff with BLM agents in Bunkerville, Nevada as an example of such an event that could “inspire further violence”:

(U//LES) I&A assesses that the belief among militia extremists that their threats and show of force against the BLM during the April Bunkerville standoff was a defining victory over government oppression is galvanizing some individuals-particularly militia extremists and violent lone offenders-to actively confront law enforcement officials, increasing the likelihood of violence. Additionally, this perceived success likely will embolden other militia extremists and like-minded lone offenders to attempt to replicate these confrontational tactics and force future armed standoffs with law enforcement and government officials during 2014.

Several incidents in 2014 are identified as having a “connection to the events in Bunkerville” based on news reports and information provided by law enforcement.  The most significant incident discussed in the assessment is the recent murder of two Las Vegas police officers and another civilian committed by Jerad and Amanda Miller.  The pair, who had attended the Bunkerville standoff, “expressed that violence was necessary to fight a perceived tyrannical US government apparatus intent on stripping Americans of their rights” according to the Southern Nevada Counterterrorism Center.  The couple also left a note on the murdered police officers that “exclaimed the attack was the start of a ‘revolution,’ and a ‘new day,’ suggesting they anticipated further violence, and made statements on their social media profiles indicating their willingness to ‘shed blood,’ and ‘die fighting,’ to stop government oppression.” 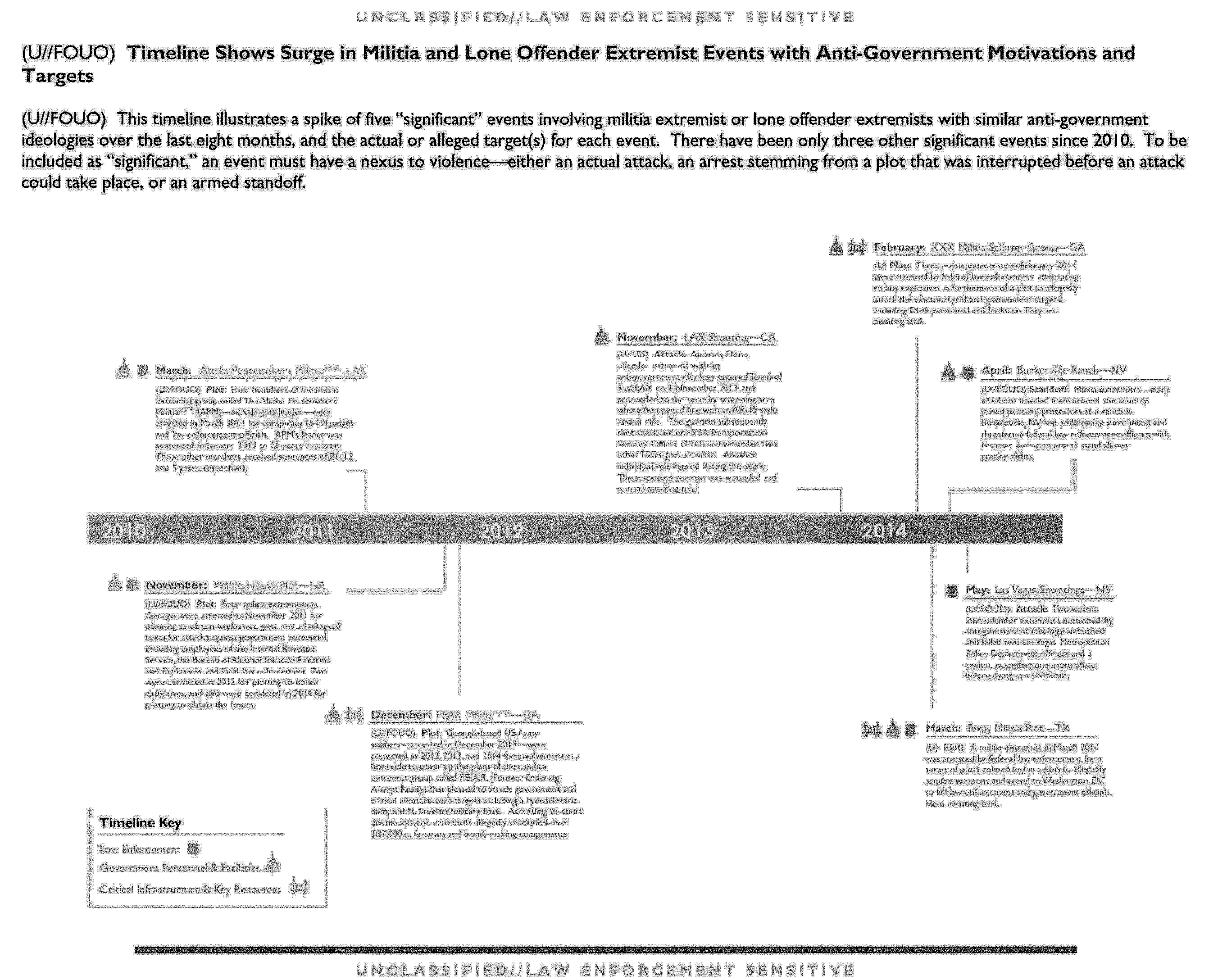 A timeline included in the DHS intelligence assessment documenting a “surge” in violent plotting from domestic extremists.

In all, DHS found that there had been eight incidents of “anti-government” violence since March 2011, either in the form of an actual attack or an arrest stemming from a plot that was interrupted prior to to an attack taking place, including:

According to DHS analysis, the common link between these incidents is the targeting of “government facilities and personnel, followed by law enforcement personnel and critical infrastructure and key resources (CIKR).”  Law enforcement is targeted “because these individuals perceive it as an extension of state control over individuals and CIKR is targeted to undermine the government’s perceived economic and societal power and control.”

Over the last few months, fusion centers around the country have issued a number of bulletins on the potential threat to law enforcement by sovereign citizens and other “domestic extremists.”  In May, the Pennsylvania Criminal Intelligence Center released a bulletin to law enforcement on “Targeting First Responders” describing a number of recent incidents where individuals have sought to bring firefighters, paramedics and law enforcement to a location for the purposes of conducting a subsequent attack.  In early June, the New York State Intelligence Center issued a bulletin stating that suspects “motivated by elements of a far right anti-government ideology with a particular fixation on law enforcement” had conducted attacks on government targets, including a recent incident in which Dennis Marx attempted to enter the courthouse in Forsyth County, Georgia with an an assault rifle, an assortment of grenades, body armor, and a gas mask.  Marx wounded a sheriff’s deputy who returned fire, preventing him from entering the courthouse where he was scheduled to have a hearing on eleven felony drug and weapons charges.  According to the bulletin, Marx had “long running issues with law enforcement and was a self-identified sovereign citizen.”

In July, the New Jersey Office of Homeland Security and Preparedness issued a bulletin to firefighters warning about the threat posed by the “anti-government sovereign citizen movement” which has been “catapulted into the forefront of public attention due to an increase in criminal activity by sovereign citizens nationwide.”  The bulletin notes that while there “have been no reported incidents of fire service personnel being targeted or coming in contact with confirmed or suspected sovereign citizens” it is nonetheless important to know the indicators that one is dealing with a sovereign citizen, such as the use of “unusual language regarding self-identity, such as ‘freemen,’ state citizens, non-resident aliens, sovereign citizens, or common law citizens.”

Last August, the FBI’s San Antonio Division issued a bulletin stating that a Sovereign Citizen group was organizing youth groups to participate in door-to-door fundraising campaign with the actual intent of identifying the homes of law enforcement and first responders.  The youth traveled in “small teams of at least two, traveled throughout neighborhoods knocking on doors” telling the homeowners that “they worked for a fund raising organization designed to help young individuals with public speaking.”  The groups were “instructed that the information they collected counted as ‘points'” and that the “team with the most points would win a college scholarship and a large sum of money.”   A yellow reference card was provided to each of the groups listing approximately fifteen professions that corresponded to a point value ranging from 500 to 2000 points.  Professions listed on the card included firefighters, nurses, doctors as well as members of the military.  However, the profession with the highest point value of 2000 was “police officer.” Following the release of the FBI bulletin, the New Jersey Regional Operations Intelligence Center later issued a request for information describing incidents where government officials had been threatened and instructing law enforcement to be careful when providing their personal information to unknown parties.