The following bulletin from the New York State Intelligence Center was originally obtained and published by Infowars.com on June 13, 2014. 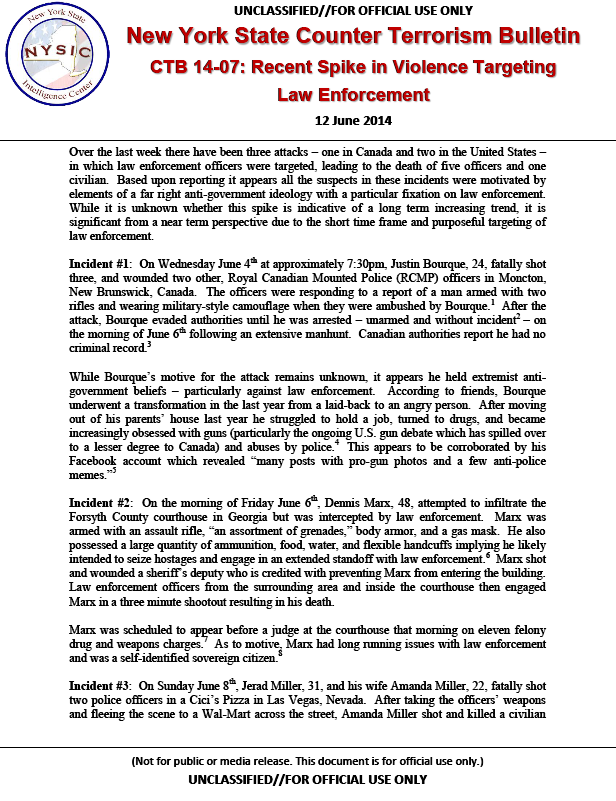 Incident #1: On Wednesday June 4th at approximately 7:30pm, Justin Bourque, 24, fatally shot three, and wounded two other, Royal Canadian Mounted Police (RCMP) officers in Moncton, New Brunswick, Canada. The officers were responding to a report of a man armed with two rifles and wearing military-style camouflage when they were ambushed by Bourque. After the attack, Bourque evaded authorities until he was arrested – unarmed and without incident – on the morning of June 6th following an extensive manhunt. Canadian authorities report he had no criminal record.

While Bourque’s motive for the attack remains unknown, it appears he held extremist anti-government beliefs – particularly against law enforcement. According to friends, Bourque underwent a transformation in the last year from a laid-back to an angry person. After moving out of his parents’ house last year he struggled to hold a job, turned to drugs, and became increasingly obsessed with guns (particularly the ongoing U.S. gun debate which has spilled over to a lesser degree to Canada) and abuses by police. This appears to be corroborated by his Facebook account which revealed “many posts with pro-gun photos and a few anti-police memes.”

Incident #2: On the morning of Friday June 6th, Dennis Marx, 48, attempted to infiltrate the Forsyth County courthouse in Georgia but was intercepted by law enforcement. Marx was armed with an assault rifle, “an assortment of grenades,” body armor, and a gas mask. He also possessed a large quantity of ammunition, food, water, and flexible handcuffs implying he likely intended to seize hostages and engage in an extended standoff with law enforcement. Marx shot and wounded a sheriff’s deputy who is credited with preventing Marx from entering the building. Law enforcement officers from the surrounding area and inside the courthouse then engaged Marx in a three minute shootout resulting in his death.

Marx was scheduled to appear before a judge at the courthouse that morning on eleven felony drug and weapons charges. As to motive, Marx had long running issues with law enforcement and was a self-identified sovereign citizen.

Incident #3: On Sunday June 8th, Jerad Miller, 31, and his wife Amanda Miller, 22, fatally shot two police officers in a Cici’s Pizza in Las Vegas, Nevada. After taking the officers’ weapons and fleeing the scene to a Wal-Mart across the street, Amanda Miller shot and killed a civilian armed with a concealed weapon who attempted to stop them. Police arrived on scene and engaged the shooters in the back of the store where they had barricaded themselves. Both suspects were hit by police gunfire. Despite initial reports that Amanda Miller shot her husband as police closed in, it appears Jerad Miller was killed by police and Amanda Miller committed suicide. According to reporting, “The couple brought bags containing a shotgun, the officers’ handguns, two other handguns, 200 rounds of ammunition, knives, first aid supplies, camouflage clothing and MRE-style food into Wal-Mart.” This appears to indicate, like the Marx case, the Millers were preparing for a long standoff with police.

Evidence at the scene and further investigation revealed the Millers embraced a far right militia ideology. At the scene, the Millers draped a Gasden flag (“Don’t Tread on Me”) over one dead officer, left a swastika on the other, and a note that said, “This is the start of the revolution.” While initial reporting of the swastika was interpreted as relating to white supremacist ideology, it appears it was meant to imply the police are Nazis, and the Millers do not appear to have subscribed to a white supremacist ideology. After entering Walmart, the shooters stated this was “the beginning of a revolution.” Both suspects reportedly often spoke about their anti-government ideas and desire to kill law enforcement. The Millers’ social media “centered on Second Amendment gun laws, government spying and drug laws” as well as contained numerous references to the impending need to use violence to support those causes. Jerad Miller had over a decade long criminal history in multiple states, including misdemeanor battery and drug trafficking.

According to data from the New America Foundation, thirty-seven (37) people have been killed in far right attacks in the U.S. since 9/11, most of which have taken place since 2008. This is in comparison to only twenty-one (21) people killed by jihadists. Another study by the Anti-Defamation League (ADL) shows that far right extremists have been killing law enforcement at an increasing rate in recent years. While far right violence is often believed to be concentrated in the south and west, a study by the Countering Terrorism Center at West Point ranked New York State (NYS) second in number of far-right attacks nationwide.

Since 2011, there have been ten submissions/tips to the NYSIC regarding anti-government related suspicious activity, two of which were adopted by the JTTF. The most recent tip from May 2014 is also the most relevant. The New York Mutual Assistance Group (NYMAG) – a statewide militia-type organization which actively trains in military combat tactics in NYS – had members leave for Clive Bundy’s ranch in Nevada last month to reportedly reinforce Bundy’s militia supporters during his standoff with the U.S. Bureau of Land Management (BLM) over unpaid cattle grazing fees. Jerad and Amanda Miller had also travelled to Bundy’s ranch in Nevada, although they were reportedly asked to leave for being too radical and due to Jerad’s criminal record.

In both the Bourque and Miller cases, the perpetrators were concerned with common far right conspiracies involving government seizure of private firearms. With the passage of the NYSafe Act in January 2013, a growing number of far right extremists – particularly militia and sovereign citizens – may view NYS as a more attractive target in order to further their agenda. These extremists must be distinguished from law abiding citizens exercising their first and second amendment rights – namely extremists are those willing to use violence, rather than the democratic process, to further their cause.

Michael Brian Vanderboegh, a longtime militia member and founder of the III Percent Patriot Movement which was supported by Jerad and Amanda Miller, travelled to NYS at least once in 2013 to speak to the Liberty Oath Keepers meeting in Monticello, NY. The III Percent Patriots are a militia group comprised primarily of gun rights extremists who believe in the need to use violence against the government to prevent what they believe to be an impending seizure of all private firearms. The name derives from “an obscure, and not particularly accurate, Revolutionary War ‘statistic’ that claimed that only 3% of the American population during the Revolutionary War participated as combatants in the war.” The Oath Keepers is an organization composed of current and former military and law enforcement personnel who take a pledge to “not obey unconstitutional orders such as orders to disarm the American people, to conduct warrantless searches, or to detain Americans as enemy combatants.” There have been multiple observed instances of overlapping membership in the Oath Keepers and the III Percent Patriots, and the Oath Keepers’ founder has spoken supportively of the III Percent Patriot Movement.

The recent attacks serve to highlight a trend of growing violence by far right extremists that is likely to continue in the near term. While attacks by lone offenders or small groups, common amongst far right extremists, are often difficult to detect and can occur with little or no warning, law enforcement should remain vigilant to any indicators or suspicious activity related to the persistent far right extremist threat. As always, observance of suspicious individuals and activities should immediately be reported to the New York State Intelligence Center – Counter Terrorism Center, Terrorism Tips Line at 1-866-SAFE-NYS (1-866-723-3697).