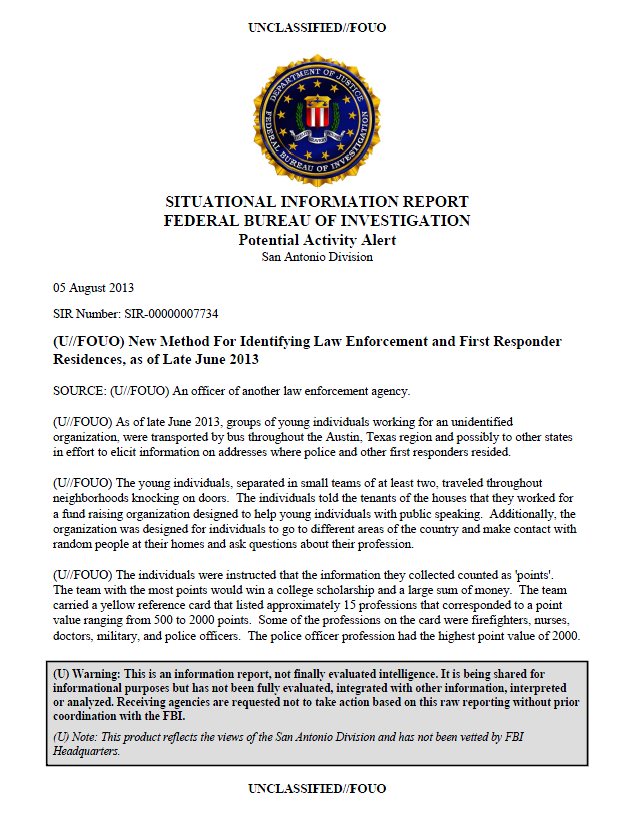 (U//FOUO) As of late June 2013, groups of young individuals working for an unidentified organization, were transported by bus throughout the Austin, Texas region and possibly to other states in effort to elicit information on addresses where police and other first responders resided.

(U//FOUO) The young individuals, separated in small teams of at least two, traveled throughout neighborhoods knocking on doors. The individuals told the tenants of the houses that they worked for a fund raising organization designed to help young individuals with public speaking. Additionally, the organization was designed for individuals to go to different areas of the country and make contact with random people at their homes and ask questions about their profession.

(U//FOUO) The individuals were instructed that the information they collected counted as ‘points’. The team with the most points would win a college scholarship and a large sum of money. The team carried a yellow reference card that listed approximately 15 professions that corresponded to a point value ranging from 500 to 2000 points. Some of the professions on the card were firefighters, nurses, doctors, military, and police officers. The police officer profession had the highest point value of 2000.

(U//FOUO) SOURCE COMMENTS: The activities described in this report were consistent with that of a Sovereign Citizen organization who were interested in the addresses of police and first responders. The individuals collecting information did not understand they were working for a Sovereign Citizen organization and that they were told lies of prize and money to gain addresses of vital individuals. The individuals indicated they were part of a larger group young individuals with the same mission and operated using the same methods described in this report.