The Dangers of Traveling Overseas to Fight Against the Islamic State

Foreign fighters are pouring into Iraq and Syria from all over the world to take up arms with the Islamic State (ISIL).  Recent reports have estimated that as many as 30,000 foreign fighters may be fighting in Iraq and Syria and that they are flowing in at a rate of nearly 1,000 new recruits a month.  However, a recently emerging phenomenon of Western individuals, primarily veterans, returning to Iraq and Syria to fight against ISIL forces has only recently begun to receive significant media attention.  No one has a precise number on how many Westerners are actually fighting in the conflict against ISIL, though estimates often place the number somewhere around 100-130 foreign fighters.

Seeing this increasing trend, the Department of Homeland Security, National Counterterrorism Center and FBI released a joint intelligence bulletin in late July warning of the dangers in traveling overseas to fight against ISIL forces.  The bulletin titled “Risks for US Persons Traveling to Combat the Islamic State of Iraq and the Levant” was obtained by Public Intelligence and discusses the “emerging trend of US persons traveling to combat ISIL.”

The bulletin states that a “number of US persons have traveled to Syria or Iraq of their own volition to combat ISIL over the past year, according to media interviews granted by these individuals” which “underscores a recent broader trend of Westerners mostly joining Kurdish forces and likely motivated by ISIL’s indiscriminate killing of civilians, aid workers, and journalists, as well as a desire to protect civilians, among other reasons.”

The bulletin notes that many of the “identified US persons do not appear to have ethnic or family ties to Syria or Iraq” and that the trend will likely continue “given the group’s ongoing atrocities, the publicity that US anti-ISIL fighters have received, the perception among some US persons that regional groups confronting ISIL need their help, and the prevalence of social media tools to facilitate communication and travel with anti-ISIL groups in the region.”

The majority of U.S. and European individuals that have traveled to Iraq and Syria to fight against ISIL have joined Kurdish forces.  Some have elected to fight alongside the Peshmerga, the forces of Iraqi Kurdistan, while many others have joined the YPG, also known as the People’s Protection Units of Syrian Kurdistan.  The YPG has a robust online recruitment effort complete with a website providing useful information on what to expect when fighting alongside Kurdish forces and interviews with foreign fighters that have successfully made the journey to Syria.  Their Facebook page The Lions of Rojava has more than 30,000 likes and features many pictures of Western fighters along with other promotional items. 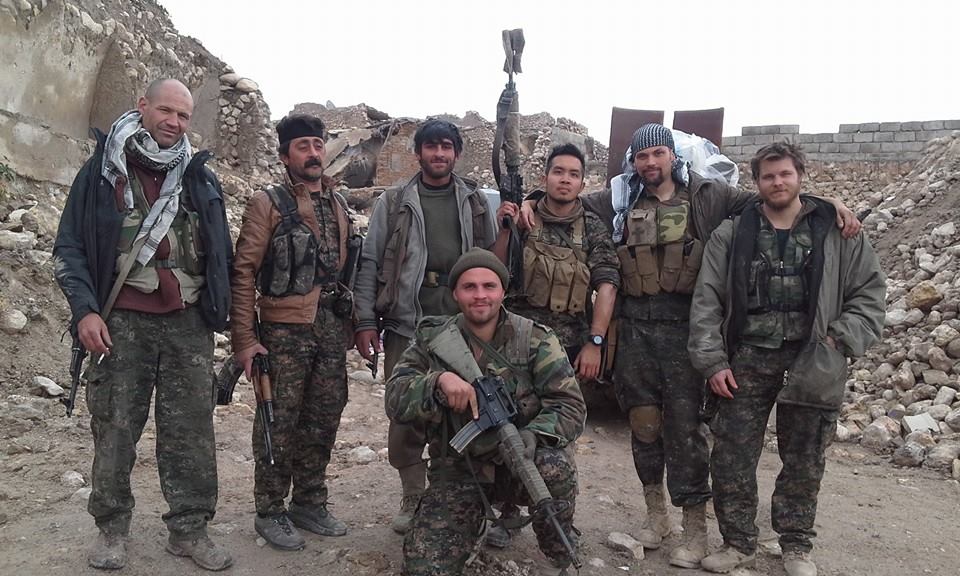 A photo from Jordan Matson’s Facebook page. Matson, second from the right, is one of a number of foreign fighters that have joined with Kurdish forces to fight against ISIL.

One fighter who has received significant media attention after joining the YPG is Jordan Matson, a 28-year-old man from Wisconsin who previously served in the U.S. Army.  Matson reportedly worked as a delivery driver for several months to save money prior to heading to Turkey in September 2014 to meet with Kurdish forces.  He was eventually escorted by a YPG representative into Iraq and posed as a doctor to get into Syria.  He has documented his journey on Facebook which contains dozens of photos of Matson with other Kurdish fighters.  In an interview with USA Today, Matson said that he is not paid for his efforts but that the Kurds “treat me like family.”  They provide little in the way of supplies and are their ranks are often made up of young men and women with minimal training.  “Sometimes it’s just kids.  That’s the way it is.  I have a Kalashnikov and that’s it.” 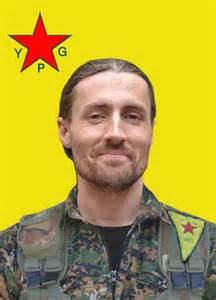 An image of Keith Broomfield distributed by the YPG.

In June, a 36-year-old from Massachusetts named Keith Broomfield was killed near Kobani, Syria while fighting with the YPG.   Broomfield is believed to be the first U.S. citizen killed while fighting with the Kurds against ISIL.  According to his father, Broomfield had gotten into trouble in his younger years and straightened his life out after finding religion.  He “believed it was God’s will that he go help the suffering Kurds.”  Broomfield’s brother said that “He knew the risk. He understood those. He believed in opposing evil, which I believe in, too.”  After his death, his sister posted a message on Facebook stating that “My brother died to defend my sisters who are being sold, enslaved, raped and murdered. To defend my brothers who are shot beheaded and dumped into piles off trucks.”

The joint intelligence bulletin issued by DHS, FBI and NCTC describes Broomfield’s death as underscoring the “risks of traveling to join anti-ISIL groups” which include “dying in accidents or being captured in combat.”  The bulletin adds that “ISIL almost certainly would seek to use captured US persons in its messaging videos, as it has done with captive Western journalists, aid workers, and coalition military personnel.”

Due to the online recruitment efforts of Kurdish forces, one particular concern that is repeated numerous times in the joint intelligence bulletin is that individuals wishing to join the fight against ISIL are vulnerable to social engineering.  “Violent extremist hackers have commonly used various forms of social engineering to obtain information about their adversaries” and ISIL supporters in other countries “could use these techniques against US persons who express on social media a desire to travel to join anti-ISIL groups.”  The bulletin cites an incident in November 2014 where a Syrian civil rights group received an email claiming to be from Canadian activists and identifying the location of ISIL strongholds.  Instead, a link in the email led to “malware intended to collect the victim’s IP address and other system information to determine a victim’s physical location.”

The threat posed by social engineering is heightened due to the fact that “those with former US military affiliations may be more desirable targets for ISIL, particularly in light of ISIL’s September 2014 call for attacks against members of the military, law enforcement, and government personnel; a message the group continues to emphasize.”  Moreover, the FBI has received “reporting indicating individuals located overseas are spotting and assessing like-minded individuals in the United States who are willing and capable of conducting attacks against current and former US-based members of the US military.”  An FBI alert from early July reported that two Middle-Eastern men approached the wife of US service member in Colorado and asked if she was the “wife of a US interrogator.”  The men laughed when she denied this and “left the area in a dark-colored, four-door sedan with two other Middle-Eastern males in the vehicle.”  The alert added that similar “incidents in Wyoming have been reported to the FBI throughout June 2015” where “family members of military personnel were confronted by Middle-Eastern males in front of their homes” who attempted to “obtain personal information about the military member and family members through intimidation.”

The joint intelligence bulletin ends with a statement that “FBI, DHS, and NCTC urge vigilance and advise individuals who express anti-ISIL sentiment publicly—current and former military members in particular—to review their online social media accounts for any information that might serve to attract the attention of violent extremists, and to exercise operational security in their interactions online.”  It also advises that anyone planning to go to the region “regardless of their intent or motivation, should be aware of the limited consular access in Syria and Iraq, the potential to inadvertently violate US or Iraqi law, and the increased likelihood of being targeted by violent extremist groups, including but not limited to ISIL.”