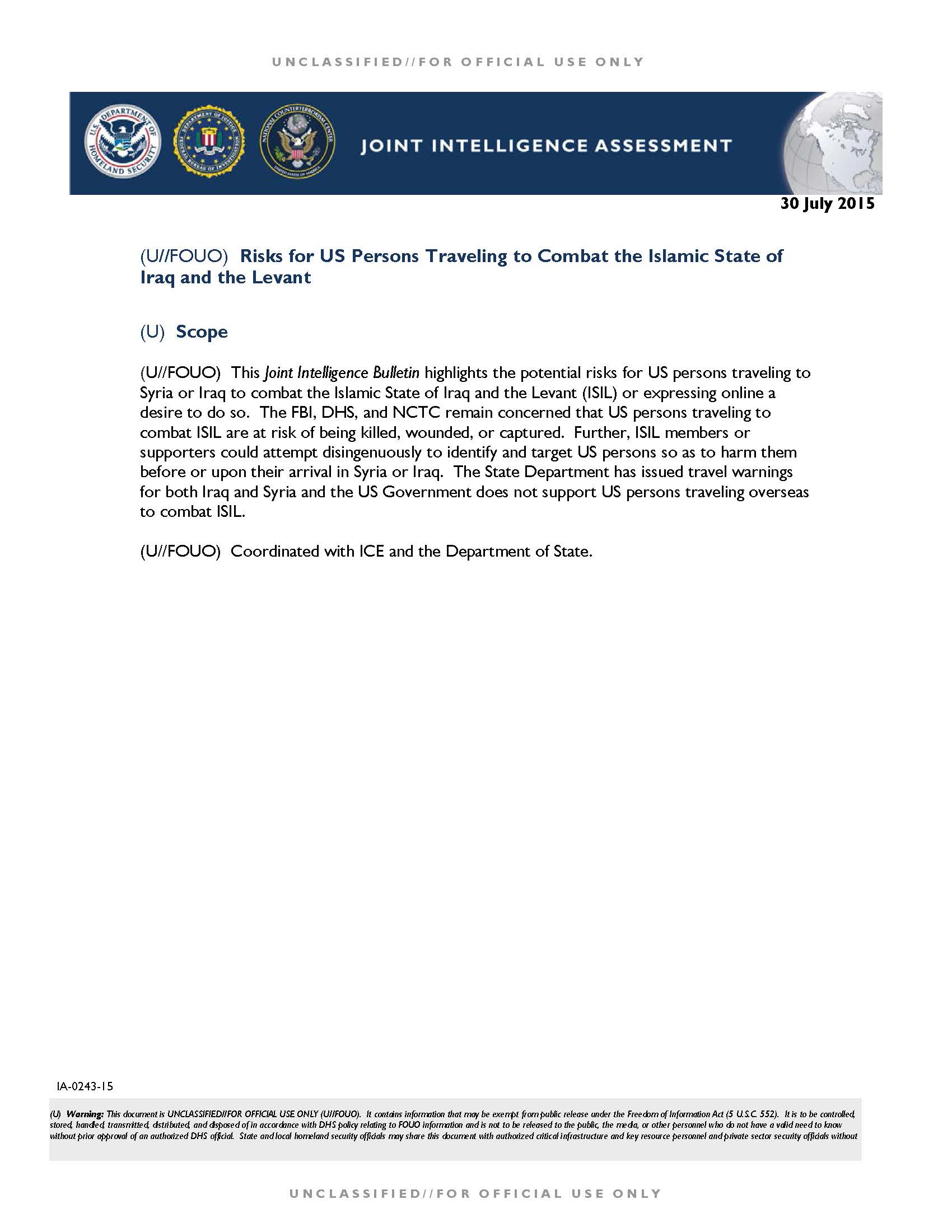 (U//FOUO) Emerging Trend of US Persons Traveling to Combat ISIL

(U//FOUO) A number of US persons have traveled to Syria or Iraq of their own volition to combat ISIL over the past year, according to media interviews granted by these individuals. This underscores a recent broader trend of Westerners mostly joining Kurdish forces and likely motivated by ISIL’s indiscriminate killing of civilians, aid workers, and journalists, as well as a desire to protect civilians, among other reasons. Many of the identified US persons do not appear to have ethnic or family ties to Syria or Iraq and some are veterans of the US military. We assess the trend of US persons traveling to Syria and Iraq to combat ISIL will continue given the group’s ongoing atrocities, the publicity that US anti-ISIL fighters have received, the perception among some US persons that regional groups confronting ISIL need their help, and the prevalence of social media tools to facilitate communication and travel with anti-ISIL groups in the region.

» (U//FOUO) Some of these US persons claim to have used social media sites to connect with Kurdish or Iraqi Christian forces fighting ISIL and gain travel guidance and facilitation, according to press reporting.
» (U//FOUO) US persons have conducted media interviews to publicize their involvement with Kurdish forces combating ISIL and inspire other Westerners to combat ISIL.
» (U//FOUO) Several of the US persons stated in media interviews they had sustained injuries in combat against ISIL, though we are not able to verify claims of direct engagement with ISIL.

(U//FOUO) Threats to US Persons Traveling to Combat ISIL

(U//FOUO) The death in June of a US person while fighting with Kurdish forces against ISIL—believed to be the first US person killed fighting ISIL—underscores the risks of traveling to join anti-ISIL groups. Individuals who do so also put themselves at risk of dying in accidents or being captured in combat. ISIL almost certainly would seek to use captured US persons in its messaging videos, as it has done with captive Western journalists, aid workers, and coalition military personnel.

(U//FOUO) ISIL members and supporters could seek to identify, recruit, and target US persons desiring to travel to combat ISIL, given many of these individuals use social media to contact anti-ISIL groups to express their travel desires. We assess ISIL supporters could hide their affiliation during the online recruitment process in an attempt to harm anti-ISIL individuals upon their arrival to Iraq or Syria.

» (U//FOUO) While all aspiring anti-ISIL travelers could be targeted by ISIL, both overseas and in the United States, those with former US military affiliations may be more desirable targets for ISIL, particularly in light of ISIL’s September 2014 call for attacks against members of the military, law enforcement, and government personnel; a message the group continues to emphasize.
» (U//FOUO) In November 2014, the FBI received reporting indicating individuals located overseas are spotting and assessing like-minded individuals in the United States who are willing and capable of conducting attacks against current and former US-based members of the US military.

(U//FOUO) Violent extremist hackers have commonly used various forms of social engineering to obtain information about their adversaries. The purpose of their social engineering is typically to acquire further information about specific individuals or groups, to include their current location. We assess ISIL supporters could use these techniques against US persons who express on social media a desire to travel to join anti-ISIL groups.

» (U//FOUO) The most common method of social engineering has been to use spear-phishing e-mails enticing victims to click on a malicious attachment or link.
» (U//FOUO) In late November 2014, a Syrian civil rights group received a malicious e-mail claiming to be from Canadian activists and enticing the recipient to access and download images purporting to be of ISIL strongholds. The link contained malware intended to collect the victim’s IP address and other system information to determine a victim’s physical location.

(U//FOUO) The FBI, DHS, and NCTC urge vigilance and advise individuals who express anti-ISIL sentiment publicly—current and former military members in particular—to review their online social media accounts for any information that might serve to attract the attention of violent extremists, and to exercise operational security in their interactions online. Travel to Syria or Iraq puts individuals at heightened risk of kidnapping, bodily harm, or death. Travelers, regardless of their intent or motivation, should be aware of the limited consular access in Syria and Iraq, the potential to inadvertently violate US or Iraqi law, and the increased likelihood of being targeted by violent extremist groups, including but not limited to ISIL.