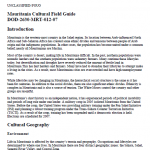 Mauritania is the westernmost country in the Sahel region. Its location between Arab-influenced North Africa and Sub-Saharan Africa has created some ethnic divides and tensions between people of Arab origin and the indigenous populations. In other cases, the population has become united under a common belief; nearly all Mauritanians are Muslim. Most of the country is desert, making life in Mauritania difficult. In the past, northern populations were nomadic herders and the southern populations were sedentary farmers. Many continue these lifestyles today, but desertification and droughts have severely reduced the amount of fertile land in Mauritania.This has hurt herders and farmers. Many have had to abandon their lifestyles to attempt make a living in the cities. As a result, most Mauritanian cities are overcrowded and have high unemployment rates. 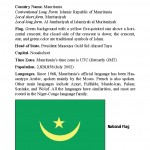 This handbook provides basic reference information on Mauritania, including its geography, history, government, military forces, and communications and transportation networks. This information is intended to familiarize military personnel with local customs and area knowledge to assist them during their assignment to Mauritania.