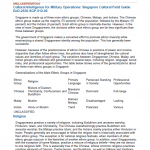 Singapore is made up of three main ethnic groups: Chinese, Malays, and Indians. The Chinese ethnic group makes up the majority (75 percent) of the population, followed by the Malays (15 percent) and the Indians (8 percent). Each ethnic group is internally diverse. However, in the view of most Singaporeans, the divisions within each ethnic group are far less significant than those between groups. 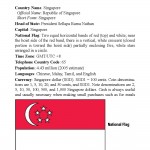 This handbook provides basic reference information on Singapore, including its geography, history, government, military forces, and communications and transportation networks. This information is intended to familiarize military personnel with local customs and area knowledge to assist them during their assignment to Singapore.

Government controls and self-censorship keep the media in prosperous, well-educated Singapore unusually clear of any antigovernment, extremist, or otherwise objectionable material. A government agency runs all broadcast stations, and the ruling party indirectly controls the print media. A variety of restrictions and the threat of libel suits discourage political criticism across all media outlets. This small island republic’s 4.6 million people boast a 92.5% literacy rate, a per capita GDP of nearly USD$50,000 (World Factbook), and a 58.6% Internet access rate (Internet World Stats). There is no prepublication censorship, but media watchdog Reporters Without Borders ranked Singapore 141 out of 169 in its Worldwide Press Freedom Index for 2007, citing “rigorous self-censorship” in coverage of domestic politics. Internet access is regulated, and private ownership of satellite dishes is banned. Singapore government officials also have a record of winning defamation suits against foreign publications (BBC Country Profile, news.bbc.co.uk).

Guidelines on the Use of the Term “Independent” by Financial Advisers

Section 29(1)(a) of the Banking Act limits credit facilities2 granted by a bank to any one person, or group of persons under the control or influence of any one person, to 25% of its capital funds, while section 29(1)(b) limits substantial loans to 50% of total credit facilities. These sections seek to limit large risk concentrations, and hence the maximum possible loss arising from the failure of a single counterparty or group of related counterparties. However, the existing approach sets limits only on the amount of credit facilities granted by a bank. It does not capture all of a bank’s exposures to a counterparty that could lead to losses to the bank, e.g. from the diminution in value of equity investments, or from the cost of replacing off-balance sheet transactions, in the event that the counterparty fails.