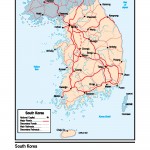 This handbook provides basic reference information on South Korea, including its geography, history, government, military forces, and communications and transportation networks. This information is intended to familiarize military personnel with local customs and area knowledge to assist them during their assignment to South Korea.

The use of flashmobs in South Korea has evolved from “just for fun” gatherings to a means of mobilizing new media-savvy users into civic and political action. Flashmobs became increasingly political in 2004 during the run-up to the ROK general elections and reached a peak of influence in 2008, when political flashmobs helped mobilize online citizens to take part in anti-mad cow candlelight street protests. The protests lasted for over 100 days and involved millions of people. As one of the most wired countries in the world, South Korea is especially fertile ground for future flashmobs, given the fun, anonymous, and easily-organized nature of the gatherings. Facilitated by emerging media tools — such as Internet blogs, smart phones, and mobile phone text messaging — potential organizers have ready access to prospective protesters against controversial policies and developments.

Widely regarded as the most connected country in the world, South Korea has a system of government regulations over Internet use that are designed to curb “general cyber crimes” but that also limit Internet freedom. The issue of Internet freedom gained attention online following the Lee Myung-bak administration’s handling of two high-profile incidents — in 2008 related to the protest against US beef imports and in 2009 over the arrest of a prominent Internet-based critic. Aside from interest related to these two issues, netizens, for the most part, do not appear concerned over the issue. If Seoul implements new regulations in response to continued growth in cyber crimes or new technologies, such as smartphones, netizens would likely oppose them only if they go beyond existing laws or impose significant inconveniences.