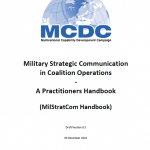 Cell phones, smart phones, the Internet, and GPS are increasingly available and are changing the nature of conflict, even in remote areas. Information can now reach out in new ways to global audiences because of the revolution in Information Technology (IT), particularly using cell phones and smart phones. The revival of hybrid warfare manifested in recent developments in the international security environment – such as the Arab Spring, the Ukrainian crisis, the rise of Jihadist-Salafist terrorism, and the European migrant crisis – demonstrates the power of communication, broadly based on IT advantages: messages and perceptions become predominant of physical engagements and strongly impact the behaviour of people. Orchestrated activities carry messages and have a crucial effect on 55 public opinions, decision-making processes, and domestic support. 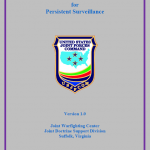 This handbook serves as a bridge between current operational-level doctrine and tactical-level employment at the joint force level. It is intended to inform doctrine writers, educators, and trainers about military support to economic normalization. It supplements, not replaces, existing joint or Service doctrine. The handbook is designed for use by personnel assigned to (or participating in) a joint operation and provides guidance at the operational level on the range of functions required to secure economic stability during or in the immediate post-conflict. Where doctrine is absent, it also presents definitions and constructs from the interagency and international community that have been harmonized with joint doctrine and discusses those ―best practices‖ that have proven of value during on-going military operations, exercises, and experimentation.

Building on several previously completed studies of civilian casualties (CIVCAS) in Afghanistan, the US Joint Forces Command (JFCOM) Joint Center for Operational Analysis (JCOA) partnered with Ms. Sarah Sewall of Harvard University to conduct an independent and comprehensive assessment of civilian casualties, the Joint Civilian Casualty Study, published in August 2010. The Commander, International Security Assistance Force (COMISAF), responded to this assessment by stating that more work was needed to ensure that the DOTMLPF changes required to reduce and mitigate CIVCAS were institutionalized. Accordingly, COMISAF requested that JCOA, with the support of the Services, conduct a study to “examine the institutionalization of CIVCAS lessons learned into US forces’ preparation for deployment, with a focus on the unique context of Afghanistan.” That study, Adaptive Learning for Afghanistan (ALA), examined ways in which lessons and adaptations in theater were captured, shared, and incorporated into force preparation. In this respect, ALA was not “another CIVCAS study,” but rather, it used CIVCAS as a test case for characterizing the overall process of adaptive learning.

The purpose of the JFIIT Tactical Leaders Handbook (version 5) is to provide ground maneuver commanders, battle staffs, and soldiers with information regarding Joint Intelligence, Surveillance, and Reconnaissance (ISR) and attack systems and how to leverage these combat multipliers during planning, preparation, and execution of military operations. JFIIT publishes a classified version of this document on the SIPRNET.

This curriculum was directly inspired by the US Marine Corps’ Combat Hunter program. Created in 2007, in response to a dramatic increase in precision fire causalities in Baghdad, Combat Hunter is systematic training designed to improve cognitive skills, showing personnel how to read the human terrain, establish a baseline, detect an anomaly, and make decisions “left of bang.” In other words, Combat Hunter was designed to train personnel to anticipate danger and meet it proactively. In an irregular conflict, this enables personnel to be the “hunters”—not the “hunted.” CODIAC integrates the USMC Combat Hunter principles, along with proven battlefield decision-making and irregular warfare instruction from across the Joint services. The goal of CODIAC is to enhance the ability of individuals and small teams to address irregular challenges by training enhanced observation, battlefield sensemaking, human terrain pattern recognition, and environmental analysis (including knowledge of combat tracking).

To understand irregular warfare’s importance to the United States, it is first necessary to understand who is capable of threatening our national security using irregular means. This assessment discusses three types of groups that conduct their conflict with the United States using such means: insurgent groups, violent extremist organizations, and criminal networks. The descriptions we provide here are not intended to be comprehensive definitions, since such definitions would incorrectly imply a consensus among policymakers, officers, and analysts that simply does not exist.