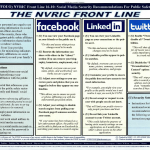 Public Safety personnel are urged to use caution when sharing information via social media. With recent officer-involved shootings around the country, those who support attacks against public safety affiliates can gain access to information shared online and may use it to condone violence. 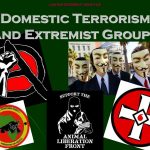 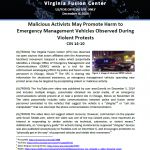 The Virginia Fusion Center (VFC) has observed via open sources that actors affiliated with the Anonymous hacktivist movement released a video which purportedly identifies a Chicago Office of Emergency Management and Communications (OEMC) vehicle as a tool for law enforcement wiretapping efforts by police and fusion center personnel in Chicago, Illinois. The VFC is sharing this information for situational awareness, as emergency management vehicles operating near protest areas may be targeted by precipitating violent or malicious activity. 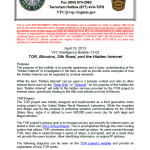 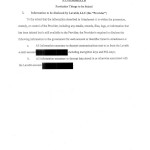 Court documents related to the U.S. government’s efforts to force Lavabit LLC, an encrypted email provider used by Edward Snowden, to hand over encryption keys to decode all secure traffic flowing through the site. The documents were originally obtained and released by Kevin Poulsen of Wired.com after being unsealed by a judge on October 2, 2013.

Criminal complaint against Amine El Khalifi, a Moroccan man accused of attempting to bomb the U.S. Capitol building. The complaint was filed February 17, 2012.

Criminal complaint in the case of United States of America v. John Kiriakou, a former CIA officer who reportedly leaked classified information to reporters regarding the waterboarding of Abu Zubaydah.

The Bloods street gang has become one of the most violent and notorious criminal organizations, spreading its influence in the U.S. from coast to coast. A traditionally African American gang, Bloods membership today includes Caucasians, Hispanics, and Asians. Blood members are involved in a variety of criminal activities including murder, assault, robbery, and narcotics distribution. Nationally, gang membership in the Bloods has been estimated between 15,000 and 20,000 members.1 Blood sets range from highly organized and structured groups similar to the Italian Mafia to loosely organized cliques with little discipline and loyalty. The Bloods have grown in popularity over the years thanks in part to the proliferation of music, movies, and television shows glorifying the “gangsta” lifestyle as well as social networking sites and the vast amount of information on the gang available on the Internet. Current intelligence gathered by the Virginia Fusion Center and other law enforcement agencies indicates the Bloods are a significant criminal threat to the Commonwealth and will continue to grow in numbers and operational scope.

The Commonwealth of Virginia’s Pandemic Influenza Plan addresses the Commonwealth’s response to and recovery from a pandemic influenza in a comprehensive and coordinated manner to ensure essential services across all sectors of state government can be maintained throughout the event period, which may last as long as 18-24 months. The Virginia Department of Health (VDH) developed an Influenza Pandemic Plan (Health Component) in 2002, which was subsequently updated in 2006 and 2007.