Since the 2006 signing of the National Military Strategy for Cyberspace Operations (NMS-CO), the emerging US cyber warfare community continues to mature and its capabilities increasingly compete for consideration when US forces plan operations. Computer network attack (CNA) and electronic attack (EA) technologies have progressed to the point where their use could be routinely considered in the context of existing and developing OPLANS. In order to effectively integrate and standardize use of these non-traditional weapons, the developers, testers, planners, targeteers, decision-makers, and battlefield operators require a comprehensive but flexible cyber lexicon that accounts for the unique aspects of cyber warfare while minimizing the requirement to learn new terms for each new technology of the future. Without a shared understanding of the accurate meanings of a significant number of frequently used terms, it will be difficult to make progress on the more complex and unresolved technical and operational issues for non-traditional weapons: actionable requirements, technical and operational assurance, effective mission planning techniques, and meaningful measures of effectiveness. In fact, the Secretary of Defense’s Information Operations (IO) Roadmap listed its first benefit to the combatant commanders as “a common lexicon and approach to IO, including support to integrated information campaign planning.” Although the focus of cyberspace operations is not the same as that of IO, they share some technologies and until now, no such lexicon (for IO, or any portion of IO) has been published. 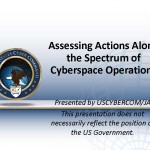 A 2011 presentation from the U.S. Cyber Command analyzing various examples of cyber attacks along a spectrum of overall cyberspace operations capabilities.

Like Damocles’ sword, this global interconnectivity both strengthens us and moderates us at the same time. We are strengthened because we are better connected to others than ever before and thus capable of spreading the seeds of liberty and opportunity to populations that yearn for it and where the lack of it is still being justified. We are moderated by this interconnectivity because others can more easily exploit the seams and turn our freedoms against us to infect with vitriolic propaganda that violently radicalizes populations across this interconnected web. It is the matter of moderation of our strength that brought together the remarkable group of thinkers whose words are reflected within this report. We are concerned here with the problem of deterring violent non-state actors from doing harm to our nation and to our allies. The questions of extending freedom through access while mitigating the misuse of that freedom to harm us were the dominant questions we took up in this workshop.

The INFOCON system provides a framework within which the Commander USSTRATCOM (CDRUSSTRATCOM), regional commanders, service chiefs, base/post/camp/station/vessel commanders, or agency directors can increase the measurable readiness of their networks to match operational priorities.