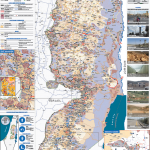 It is no longer possible to redress the issue of the blockage of the horizon of the peace talks with the same means and methods that have been repeatedly tried and proven unsuccessful over the past years. The crisis is far too deep to be neglected, and what is more dangerous are attempts to simply circumvent it or postpone its explosion. It is neither possible, nor practical, nor acceptable to return to conducting business as usual, as if everything is fine. It is futile to go into negotiations without clear parameters and in the absence of credibility and a specific timetable. Negotiations will be meaningless as long as the occupation army on the ground continues to entrench its occupation, instead of rolling it back, and continues to change the demography of our country in order to create a new basis on which to alter the borders.

Partial List of Items Prohibited/Permitted into the Gaza Strip

The following list is approximate and partial, and it changes from time to time. It is based on information from Palestinian traders and businesspersons, international organizations, and the Palestinian Coordination Committee, all of whom “deduce” what is permitted and what is banned based on their experience requesting permission to bring goods into Gaza and the answers they receive from the Israeli authorities (approved or denied). It is not possible to verify this list with the Israeli authorities because they refuse to disclose information regarding the restrictions on transferring goods into Gaza. It should be noted that Israel permits some of the “prohibited” items into Gaza (for example: paper, biscuits, and chocolate), on the condition that they are for the use of international organizations, while requests from private merchants to purchase them are denied.

The continuing crisis in the occupied Palestinian territory, the growing restrictions on the movement of people and goods and the worsening violence continue to affect the social and economic life of Palestinians, with consequences for their health status and access to health services. Deaths and injuries resulting from the occupation and the internal conflict increased during 2007 and continued to rise in the first months of 2008.

The Palestinian National Early Recovery and Reconstruction Plan for Gaza, 2009 ‐ 2010

This document has been prepared by the Palestinian National Authority’s Ministry of Planning with support from all line ministries, UN agencies, the EC, the World Bank and other partners. This plan will be used to consolidate resources and responses to help the Palestinian people in Gaza rebuild their lives and livelihoods, and as such will form the basis for mobilizing resources and efforts at the international conference in Egypt on March 2, 2009 and provide the guiding framework for all early recovery and reconstruction interventions.