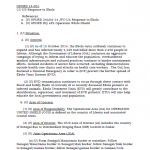 United States Africa Command, in concert with other U.S. Government agencies and international partners, conducts sustained security engagement through military-to-military programs, military-sponsored activities, and other military operations as directed to promote a stable and secure African environment in support of U.S. foreign policy.