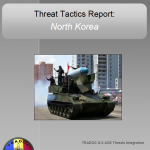 The Korean peninsula is a location of strategic interest for the US in the Pacific Command (PACOM), and many observers note that North Korea is an unpredictable and potentially volatile actor. According to the Department of Defense in its report to Congress and the intelligence community, the DPRK “remains one of the United States’ most critical security challenges for many reasons. These include North Korea’s willingness to undertake provocative and destabilizing behavior, including attacks on the Republic of Korea (ROK), its pursuit of nuclear weapons and long-range ballistic missiles, and its willingness to proliferate weapons in contravention of United Nations Security Council Resolutions.”

The Democratic People’s Republic of Korea (DPRK) remains one of the United States’ most critical security challenges in Northeast Asia. North Korea remains a security threat because of its willingness to undertake provocative and destabilizing behavior, including attacks on the Republic of Korea (ROK), its pursuit of nuclear weapons and long-range ballistic missiles, and its willingness to proliferate weapons in contravention of its international agreements and United Nations Security Council Resolutions. North Korean aspiration for reunification – attainable in its mind in part by expelling U.S. forces from the Peninsula – and its commitment to perpetuating the Kim family regime are largely unchanged since the nation’s founding in 1948, but its strategies to achieve these goals have evolved significantly. Under Kim Jong Il, DPRK strategy had been focused on internal security; coercive diplomacy to compel acceptance of its diplomatic, economic and security interests; development of strategic military capabilities to deter external attack; and challenging the ROK and the U.S.-ROK Alliance. We anticipate these strategic goals will be consistent under North Korea’s new leader, Kim Jong Un.

In July and August 2010, Uriminjokkkiri, an official North Korean website allegedly operated by the United Front Department of the Workers Party of Korea, opened up accounts and began rehosting existing official North Korean propaganda material on three popular international online social media outlets: YouTube, Twitter, and Facebook. Despite the ROK Government’s blockage of South Koreans’ access to North Korea’s YouTube channel and Twitter page, the North continued to channel its messages and even made its first online interaction with a South Korean follower on Twitter. Facebook took down North Korea’s Facebook page on 23 August, after only a few days of operation, for violating terms of use.