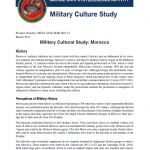 Morocco’s military traditions are closely linked with the country’s history and are influenced by its extensive political and cultural heritage. Morocco’s history, and thus its military history, began in the Medieval Islamic period, 12 centuries before the end of the French and Spanish protectorate in 1956, which is often represented as the year Morocco became independent. Moroccans, however, consider 1956 the year the country regained its independence after 44 years of foreign rule. Although foreign rule profoundly transformed Morocco’s economy and infrastructure, Moroccans view the post-protectorate period as a reversion to independent rule by the reigning Alawi or Filali dynasties, which had held power in the country since 1660. Mohamed V presided over this independent rule and military modernization for 34 years (1927–1961). Moroccans inherited a modernized state, albeit with surviving traditional institutions, from their former European rulers, and the dynastic continuity under the protectorate ensured the prominent re-emergence of indigenous influence in many areas, including the military. 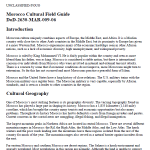 Moroccan culture uniquely combines aspects of Europe, the Middle East, and Africa. It is a Muslim country with close ties to other Arab countries in the Middle East, but its proximity to Europe has given it a more Western feel. Morocco experiences many of the economic hardships seen in other African nations, such as a lack of economic diversity, high unemployment, and widespread poverty. 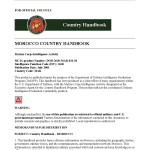 This handbook provides basic reference information on Morocco, including the geography, history, government, military forces, and the communications, and transportation network Morocco. This information is intended to familiarize military personnel with local customs and area knowledge in an effort to assist them during their assignment to Morocco.

As the Moroccan regime has cracked down recently on traditional media, the increased availability of high-speed Internet and Internet-enabled mobile devices has allowed Moroccans to take otherwise unreportable stories and grievances online. So far, the government has been relatively hands-off with regard to Internet content, though a few cases directly involving the royal family have resulted in arrests and trials. As social media use becomes more widespread and available within Morocco, the monarchy risks reaching a tipping point beyond which only draconian filtering would enable it to control the media message, a step it seems unlikely to take given its sensitivities regarding its international image.