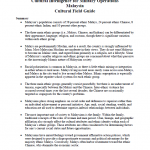 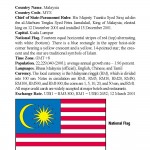 This handbook provides basic reference information on Malaysia, including its geography, history, government, military forces, and communications and transportation networks. This information is intended to familiarize military personnel with local customs and area knowledge to assist them during their assignment to Malaysian.

Malaysia’s mainstream media are state controlled through indirect ownership of media conglomerates and closely adhere to the government line. Some mainstream outlets, especially Chinese newspapers, raise contentious issues such as the treatment of the country’s predominant Malay and minority Chinese and Indian communities. Newspapers are the preferred choice for political news, but TV and radio have nearly twice the audience, with about 90-percent reach, compared to 50 percent for newspapers. Internet use is increasing, and alternative news portals and blogs provide an important venue for dissent and criticism despite government defamation suits against bloggers and the use of the Internal Security Act.