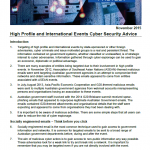 Targeting of high profile and international events by state-sponsored or other foreign adversaries, cyber criminals and issue motivated groups is a real and persistent threat. The information contained on government systems, whether classified or unclassified, is of strategic interest to cyber adversaries. Information gathered through cyber espionage can be used to gain an economic, diplomatic or political advantage. 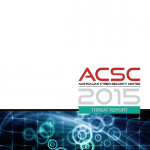 This is the first unclassified Australian Cyber Security Centre (ACSC) Threat Report. All ACSC partner agencies have contributed to provide information tailored for Australian organisations about the threats their networks face from cyber espionage, cyber attacks and cybercrime. It also contains mitigation and remediation information to assist organisations to prevent, and respond to, the threat.

A collection of documents released publicly on July 11, 2012 in response to a Freedom of Information request from the Australian Department of the Prime Minister and Cabinet for material relating to WikiLeaks, Julian Assange and Bradley Manning.

The objective of this Memorandum of Understanding is to establish a framework to encourage, develop and facilitate bilateral cooperative activity in science and technology that contributes to the National Security and Counter-Terrorism activities of both Signatories.

This section provides the long-term Public Key Infrastructure (PKI) interoperability architecture for the CCEB Allies as agreed at the February 2005 Canberra Collocated Meeting. The architecture enables interoperability through direct cross-certification of each National Defence PKI (NDPKI) in a mesh configuration.

Townsville HSD reported a youth at Cleveland Detention Centre was displaying influenza like symptoms. The inmate was swabbed, isolated and commenced on Tamiflu, with ten further courses of Tamiflu supplied to the Centre’s nurse. Two further suspected cases have been swabbed, administered Tamiflu and isolated. On Tnesday, 04 Angnst 2009, Townsville HSD reported two positive cases of Pandemic (HlNl) 2009 at the facility.