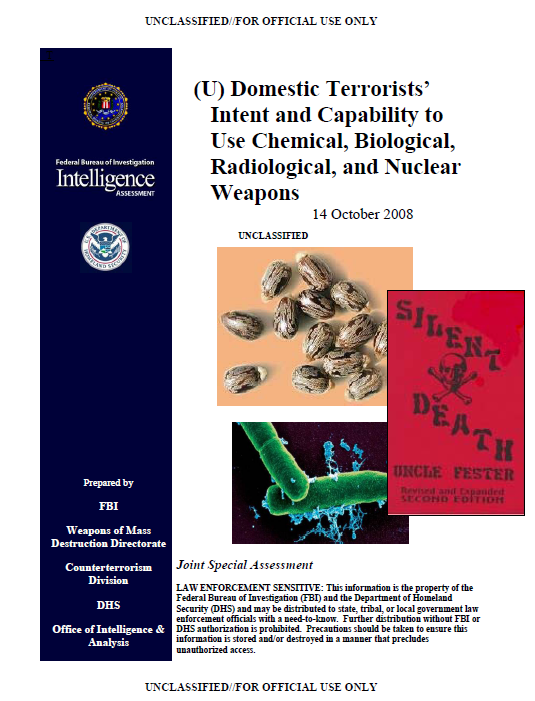 (U) Domestic Terrorists’ Intent and Capability to Use Chemical, Biological, Radiological, and Nuclear Weapons

(U) This assessment discusses the use and attempted use of chemical, biological, radiological, and nuclear (CBRN) materials by domestic terrorists subsequent to the 2001 anthrax attacks. According to the MIOG Section 266-1(1), “domestic terrorists” are “individual(s) who seek to further political or social goals wholly or in part through activities that involve the use of force or violence and violate federal law.” For the purposes of this assessment, the definition excludes foreign-based and “homegrown” terrorists who identify with or are affiliated with an international terrorist ideology or group.

• (U//LES) The FBI has extensive source coverage of domestic terrorist groups, so the absence of information with regard to intentions of these groups to pursue CBRN weapons is an indication of lack of intent.

(U//LES) Most domestic terrorists lack intent to use chemical, biological, radiological, or nuclear (CBRN) weapons. Most likely domestic terrorists believe they can achieve their goals with traditional weapons and tactics, such as firearms, improvised explosive devices, and improvised incendiary devices.1 Indicators of intent to use CBRN weapons include individuals procuring laboratory equipment, researching or discussing CBRN materials or weapons, and recruiting scientific experts. There is no evidence that domestic terrorist groups are conducting these activities, and due to the isolated nature of lone offenders, these activities would likely not be observable.

(U//LES) Domestic terrorists almost certainly lack the capability to construct and use CBRN weapons in mass casualty attacks due to the significant scientific, technical, and logistical hurdles that must be overcome. Use of CBRN materials in a crude attack is not technically difficult to accomplish, but the consequences would likely be limited.

(U//LES) Domestic terrorists who intend to use chemical or biological weapons will likely continue to prefer those that are easily produced or material which is easily obtained, such as ricin or cyanides, although these are not the only possible options. Three of the six known cases since 2002 have involved ricin, two were cyanide, and one was sarin. Ricin was the only CBRN material known to have been distributed with harmful intent.

(U//LES) On 2 October 2006, Denys Ray Hughes was sentenced to a term of 87 months in prison for various violations, including the attempt to produce ricin as a weapon. Hughes, an antigovernment survivalist, had operated a clandestine weapons manufacturing operation from his residences in Arizona and Wisconsin. Searches of these residences recovered more than 100 guns, bomb-making materials, and raw ingredients to manufacture ricin. Moreover, the searches uncovered a manual titled “Silent Death,” published under the name “Uncle Fester,” which contained a chapter on ricin production.

(U//LES) On 28 November 2006, Demetrius “Van” Crocker was sentenced to 30 years in prison for various violations, including the acquisition of a chemical weapon. Crocker, a self-proclaimed former member of the National Socialist Movement with a history of expressing right wing beliefs similar to those held by white nationalist extremist organizations,5 sought explosive materials to carry out attacks against government buildings. During the course of an FBI undercover operation, Crocker acquired an inert canister of sarin nerve gas and a block of inert C-4 explosive. According to media reports detailing his trial, Crocker told the FBI undercover agent that his “dream” was to set off a dirty bomb in Washington, DC, while Congress was in session, and he spoke of blowing up federal buildings, including a courthouse. He also said he wanted to learn how to fly a helicopter to spray or bomb African-American neighborhoods in Jackson, Tennessee, with poison gas and spike drugs with poison to kill African-Americans. Crocker denied any current association with white supremacy groups although a search of his residence uncovered white nationalist extremist paraphernalia.

• (U//FOUO) Persons with degrees in science, specifically microbiology
• (U//FOUO) Larger than usual electric, gas, or water bills
• (U//FOUO) Large or regular purchases of chemicals, such as bleach, Lysol, or hydrogen peroxide
• (U//FOUO) Evidence of animal testing for effectiveness of material
• (U//FOUO) Presence of a fume hood or cabinet with exhaust vent fitted with a filter
• (U//FOUO) Use of masks for respiratory protection
• (U//FOUO) Unexplained animal deaths surrounding a suspicious location
• (U//FOUO) Likely to be done in a basement setting of a dwelling, especially one away from neighbors who could notice unusual signs or become ill from exposure

(U//LES) This list represents those agents that a terrorist adversary could reasonably acquire, produce, and effectively disseminate as a potential biological weapon and that could be expected to have both public health and economic consequences. Unlike TICs, however, these agents cannot be readily disseminated and require additional processing prior to use as a biological weapon.

(U) It should also be noted that the toxins listed are biologically derived substances and are neither infectious nor contagious but highly pathogenic to humans.

(U//FOUO) Potential Indicators for Terrorist Use of TICs

(U//FOUO) Potential indicators of attempts to acquire TICs, use TICs as weapons, or produce an improvised dispersal device (IDD) for TICS include:

• (U//FOUO) Interest in or surveillance of specific industrial, transportation, and storage facilities containing TICs, such as chemical plants, railroad cars, chemical tankers, and industrial storage tanks
• (U//FOUO) Inquiries to companies involved in the production, distribution, or sale of TICs or attempts to acquire instructions on the use or handling of TICs
• (U//FOUO) Research into IDDs for hazardous chemicals, including handheld IDDs like spray bottles or IDDs that can be mounted on trucks, trailers, aircrafts, or boats
• (U//FOUO) Reluctance to explain the need for possessing, purchasing, or inquiring about TICs and chemical equipment, especially if the individual appears to lack scientific or technical knowledge or skills
• (U//FOUO) Attempts to conceal activities or identities, such as ordering TIC deliveries to remote locations or using false names when attempting to purchase TICs
• (U//FOUO) Injuries consistent with those sustained in the production, handling, or use of chemicals, such as chemical burns and missing hands or fingers
• (U//FOUO) Noxious or unusual fumes, liquids, or odors coming from a location incongruous with chemical use
• (U//FOUO) Chemical containers or laboratory equipment discarded in dumpsters
• (U//FOUO) Purchase or rental of agricultural chemical sprayers, spraying vehicles, or aircraft or possession of large numbers of atomizers or spray bottles
• (U//FOUO) Presence of chemical fume hoods, exhaust systems, or air-filtration units that are inconsistent with routine building requirements in a facility
• (U//FOUO) Possession of chemical protective garments, masks, or respirators
• (U//FOUO) Interest in obtaining HAZMAT endorsements for commercial drivers’ licenses