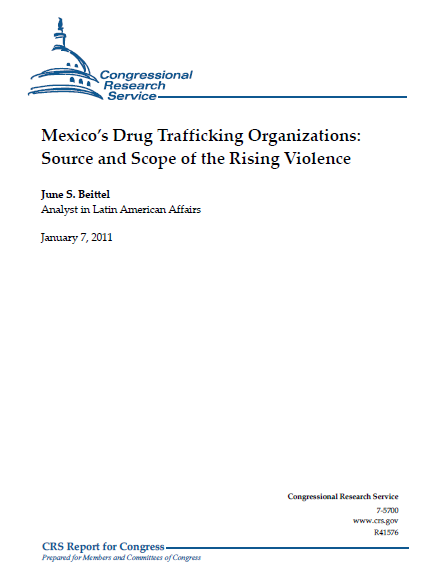 In Mexico, the violence generated by drug trafficking organizations (DTOs) in recent years has been, according to some, unprecedented. In 2006, Mexico’s newly elected President Felipe Calderón launched an aggressive campaign—an initiative that has defined his administration— against the DTOs that has been met with a violent response from the DTOs. Government enforcement efforts have had successes in removing some of the key leaders in all of the seven major DTOs. However, these efforts have led to violent succession struggles within the DTOs themselves. In July 2010, the Mexican government announced that more than 28,000 people had been killed in drug trafficking-related violence since December 2006, when President Calderón came to office.

Although violence has been an inherent feature of the trade in illicit drugs, the character of the
drug trafficking-related violence in Mexico seems to have changed recently, now exhibiting
increasing brutality. In the first 10 months of 2010, an alarming number of Mexican public
servants have been killed, allegedly by the DTOs, including 12 Mexican mayors and in July, a
gubernatorial candidate. The massacres of young people and migrants, the killing and
disappearance of Mexican journalists, the use of torture, and the phenomena of car bombs have
received wide media coverage and have led some analysts to question if the violence has been
transformed into something new, beyond the typical violence that has characterized the trade. For
instance, some observers have raised the concern that the Mexican DTOs may be acting more like
domestic terrorists. Others maintain that the DTOs are transnational organized crime
organizations at times using terrorist tactics. Still others believe the DTOs may be similar to
insurgents attempting to infiltrate the Mexican state by penetrating the government and police.
The growing security crisis in Mexico, including the March 13, 2010, killing of three individuals
connected to the U.S. consulate in Ciudad Juárez, Mexico (two of the victims were U.S. citizens),
has drawn the attention of the U.S. Congress and has raised concerns about the stability of a
strategic partner and neighbor. Congress is also concerned about the possibility of “spillover”
violence along the U.S. border and further inland. The 111th Congress held more than 20 hearings
dealing with the violence in Mexico, U.S. foreign assistance, and border security issues. The 112th
Congress is likely to be interested in progress made by the Calderón government in quelling the
violence and asserting its authority in DTO strongholds, and in the implications for the United
States. Members are also likely to continue to conduct close oversight of U.S.-Mexico security
cooperation and other related bilateral issues.

This report provides background on drug trafficking in Mexico, identifies the major drug
trafficking organizations operating today, and analyzes the context, scope, and scale of the
violence. It examines current trends of the violence, analyzes prospects for curbing violence in
the future, and compares it with violence in Colombia. 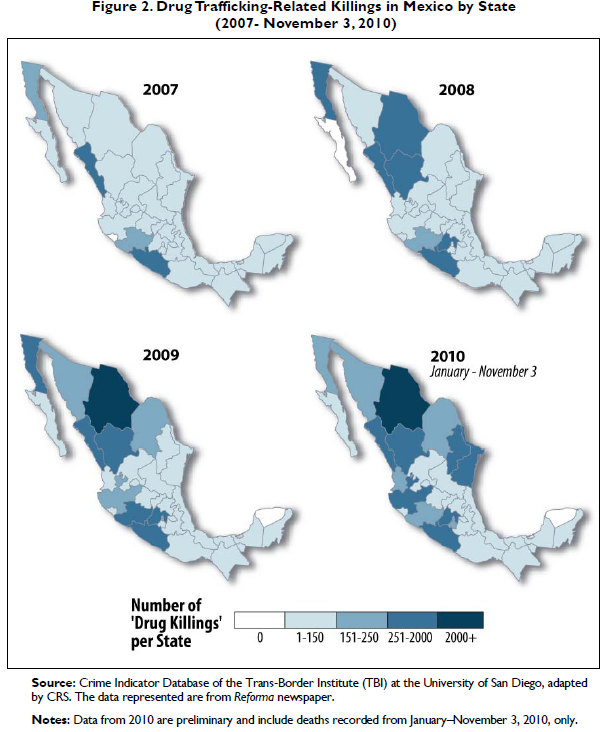