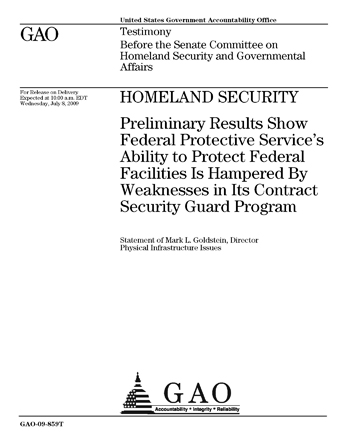 FPS does not fully ensure that its contract security guards have the training and certifications required to be deployed to a federal facility. FPS requires that all prospective guards complete about 128 hours of training including 8 hours of x-ray and magnetometer training. However, in one region, FPS has not provided the x-ray or magnetometer training to its 1,500 guards since 2004. Nonetheless, these guards are assigned to posts at federal facilities. X-ray training is critical because guards control access points at facilities. Insufficient x-ray and magnetometer training may have contributed to several incidents where guards were negligent in carrying out their responsibilities. For example, at a level IV facility, an infant in a carrier was sent through an xray machine due to a guard’s negligence. Moreover, GAO found that FPS does not have a fully reliable system for monitoring and verifying guard training and certification requirements. GAO reviewed 663 randomly selected guard records and found that 62 percent of the guards had at least one expired certification including a declaration that guards have not been convicted of domestic violence, which make them ineligible to carry firearms.

FPS has limited assurance that its guards are complying with post orders. FPS does not have specific national guidance on when and how guard inspections should be performed. FPS’s inspections of guard posts at federal facilities are inconsistent and the quality varied in the six regions GAO visited. GAO also found that guard inspections are typically completed by FPS during regular business hours and in locations where FPS has a field office; and seldom on nights and on weekends. However, on an occasion when FPS did conduct a post inspection at night it found a guard asleep at his post after taking the pain killer prescription drug Percocet. FPS also found other incidents at level IV facilities where guards neglected or inadequately performed their assigned responsibilities. For example, a guard failed to recognize or did not properly x-ray a box containing handguns at the loading dock at a facility. FPS became aware of the situation because the handguns were delivered to FPS.

GAO identified substantial security vulnerabilities related to FPS’s guard program. GAO investigators carrying the components for an improvised explosive device successfully passed undetected through security checkpoints monitored by FPS’s guards at each of the 10 level IV federal facilities where GAO conducted covert testing. Of the 10 level IV facilities GAO penetrated, 8 were government owned, 2 were leased, and included offices of a U.S. Senator and U.S. Representative, as well as agencies such as the Departments of Homeland Security, State, and Justice. Once GAO investigators passed the control access points, they assembled the explosive device and walked freely around several of floors of these level IV facilities with the device in a briefcase. In response to GAO’s briefing on these findings, FPS has recently taken some actions including increasing the frequency of intrusion testing and guard inspections. However, implementing these changes may be challenging, according to FPS. 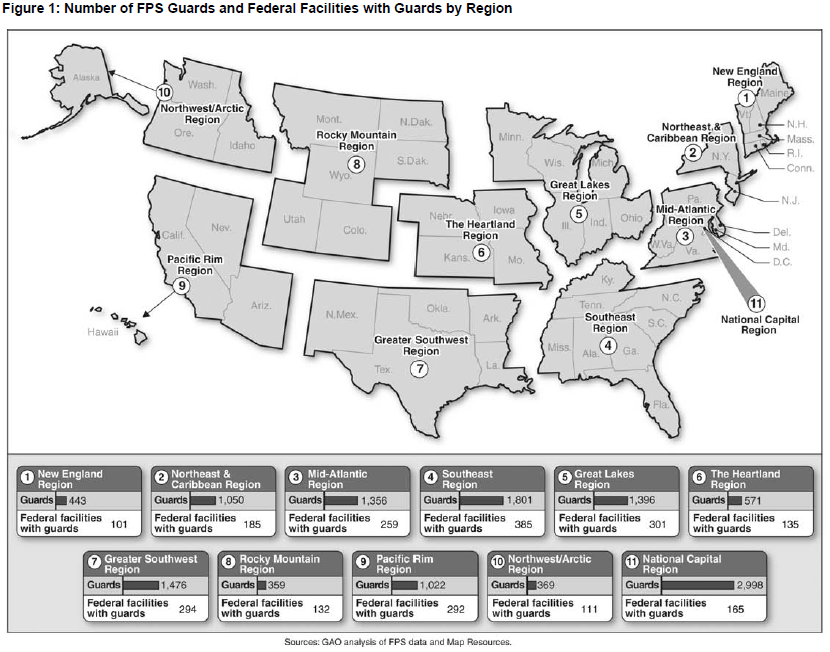 Lapses and weaknesses in FPS’s x-ray and magnetometer training have contributed to several incidents at federal facilities in which the guards were negligent in carrying out their responsibilities. For example, at a level IV federal facility in a major metropolitan area, an infant in a carrier was sent through the x-ray machine. Specifically, according to an FPS official in that region, a woman with her infant in a carrier attempted to enter the facility, which has child care services. While retrieving her identification, the woman placed the carrier on the x-ray machine. Because the guard was not paying attention and the machine’s safety features had been disabled, the infant in the carrier was sent through the x-ray machine. FPS investigated the incident and dismissed the guard. However, the guard subsequently sued FPS for not providing the required x-ray training. The guard won the suit because FPS could not produce any documentation to show that the guard had received the training, according to an FPS official. In addition, FPS officials from that region could not tell us whether the xray machine’s safety features had been repaired.

We also found that some guards were not provided building-specific training, such as what actions to take during a building evacuation or a building emergency. This lack of training may have contributed to several incidents where guards neglected their assigned responsibilities. For example,

In addition to insufficient building-specific training, some guards said they did not receive scenario-based training and thus were not sure what they should do in certain situations. During our site visits at 6 FPS regions, we interviewed over 50 guards and presented them with an incident that occurred at a federal facility in 2008. Specifically, we asked the guards whether they would assist an FPS inspector chasing an individual escaping a federal facility in handcuffs. The guards’ responses varied. Some guards stated that they would assist the FPS inspector and apprehend the individual, while others stated that they would likely do nothing and stay at their post because they feared being fired for leaving their post. Some guards also told us that they would not intervene because of the threat of a liability suit for use of force and did not want to risk losing their job. The guard’s different responses suggest that more scenario-based training may be needed. 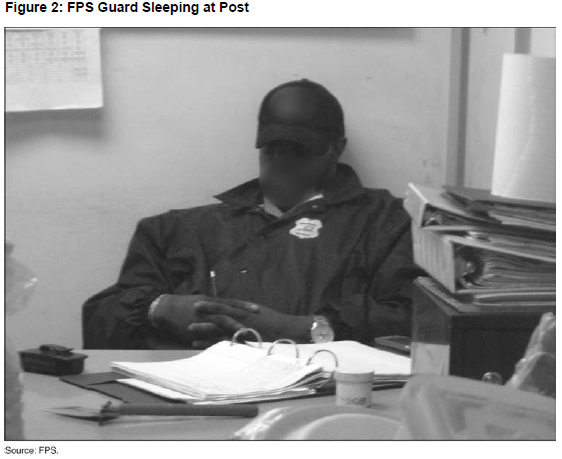 FPS’s post orders also describe a number of items that guards are prohibited from doing while on post. For example, guards are prohibited from sleeping, using government property such as computers, and test firing a weapon unless at a range course. However, FPS has found incidents at level IV facilities where guards were not in compliance with post orders. Some examples follow.
• A guard was caught using government computers, while he was supposed to be standing post, to further his private for-profit adult website.
• A guard attached a motion sensor to a pole at the entrance to a federal facility garage to alert him whenever a person was approaching his post. Another law enforcement agency discovered the device and reported it to FPS.
• A guard, during regular business hours, accidentally fired his firearm in a restroom while practicing drawing his weapon.

A guard failed to recognize or did not properly x-ray a box containing semi-automatic handguns at the loading dock at one federal facility we visited. FPS only became aware of the situation because the handguns were delivered to FPS. While the guards were fired or disciplined in each of these incidents, they illustrate that FPS is able to identify some instances where guards are not complying with post orders and the importance of why it should improve the oversight of its guard program.