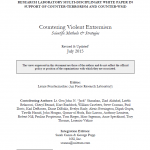 This Concept of Operations (CONOPS) identifies and describes the use of International Distributed Unified Reporting Environment (INDURE) Version 1.1 on the World Wide Web Internet domain. Under the guidance of the United States Central Command (USCENTCOM) Theater and Under Secretary Defense – Intelligence (USD-I), the need for INDURE was scoped and funded. INDURE will be fully interoperable with the Combined Information Data Network Exchange (CIDNE) (which resides on Secret and higher classification networks) and will be able to exchange data with CIDNE. The Secret-to-Unclassified exchange will require data to be air-gapped between the systems due to the classification of the information domain CIDNE resides on and will require FDO and/or release authority to move data between domains.