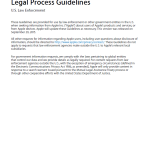 These Guidelines are provided for use by law enforcement or other government entities in the U.S. when seeking information from Apple Inc. (“Apple”) about users of Apple’s products and services, or from Apple devices. Apple will update these Guidelines as necessary. This version was released on September 29, 2015.

On May 21, 2013, the Permanent Subcommittee on Investigations (PSI) of the U.S. Senate Homeland Security and Government Affairs Committee will hold a hearing that is a continuation of a series of reviews conducted by the Subcommittee on how individual and corporate taxpayers are shifting billions of dollars offshore to avoid U.S. taxes. The hearing will examine how Apple Inc., a U.S. multinational corporation, has used a variety of offshore structures, arrangements, and transactions to shift billions of dollars in profits away from the United States and into Ireland, where Apple has negotiated a special corporate tax rate of less than two percent. One of Apple’s more unusual tactics has been to establish and direct substantial funds to offshore entities in Ireland, while claiming they are not tax residents of any jurisdiction. For example, Apple Inc. established an offshore subsidiary, Apple Operations International, which from 2009 to 2012 reported net income of $30 billion, but declined to declare any tax residence, filed no corporate income tax return, and paid no corporate income taxes to any national government for five years. A second Irish affiliate, Apple Sales International, received $74 billion in sales income over four years, but due in part to its alleged status as a non-tax resident, paid taxes on only a tiny fraction of that income.

Two pamphlets produced by the NSA on “Using Your BlackBerry Securely” and “Security Tips for Personally Managed Apple iPhones and iPads” from March 2011.