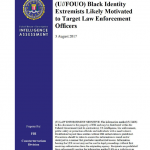 The FBI assesses it is very likely Black Identity Extremist (BIE) perceptions of police brutality against African Americans spurred an increase in premeditated, retaliatory lethal violence against law enforcement and will very likely serve as justification for such violence. The FBI assess it is very likely this increase began following the 9 August 2014 shooting of Michael Brown in Ferguson, Missouri, and the subsequent Grand Jury November 2014 declination to indict the police officers involved. The FBI assesses it is very likely incidents of alleged police abuse against African Americans since then have continued to feed the resurgence in ideologically motivated, violent criminal activity within the BIE movement. The FBI assesses it is very likely some BIEs are influenced by a mix of anti-authoritarian, Moorish sovereign citizen ideology, and BIE ideology. The FBI has high confidence in these assessments, based on a history of violent incidents attributed to individuals who acted on behalf of their ideological beliefs, documented in FBI investigations and other law enforcement and open source reporting. The FBI makes this judgment with the key assumption the recent incidents are ideologically motivated.