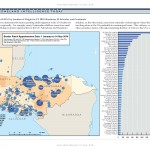 We analyzed these locations to determine the factors pushing child migration to the US Border. We assess these reasons vary regionally. For example, many Guatemalan children come from rural areas, indicating they are probably seeking economic opportunities in the US. Salvadoran and Honduran children, on the other hand, come from extremely violent regions where they probably perceive the risk of traveling alone to the US preferable to remaining at home. This violence, combined with poor economies and other secondary factors will make stemming the flow of UACs to the US a very complex issue to address. 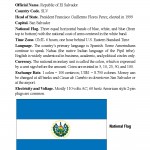 This handbook provides basic reference information on El Salvador, including its geography, history, government, military forces, and communications and transportation networks. This information is intended to familiarize military personnel with local customs and area knowledge to assist them during their assignment to El Salvador.

Maras emerged out of the conflicts during the 1970s & 80s in Central America. In the context of the wars and insurgencies in El Salvador, Guatemala, and Nicaragua, thousands of people, including youngmen fled North, many which had training on guns as well as armed combat techniques. In Los Angeles they encountered rejection by other Hispanic communities and found it difficult to find work and socialize; a percentage of these young men, especially those from El Salvador where part of the insurgency/ civil war back home and joined the 18th Street Gang from LA, which was started by Mexicans and expanded to other Hispanics, African- Americans, and Asians.