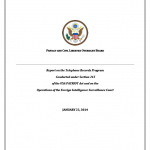 Section 215 is designed to enable the FBI to acquire records that a business has in its possession, as part of an FBI investigation, when those records are relevant to the investigation. Yet the operation of the NSA’s bulk telephone records program bears almost no resemblance to that description. While the Board believes that this program has been conducted in good faith to vigorously pursue the government’s counterterrorism mission and appreciates the government’s efforts to bring the program under the oversight of the FISA court, the Board concludes that Section 215 does not provide an adequate legal basis to support the program. There are four grounds upon which we find that the telephone records program fails to comply with Section 215. First, the telephone records acquired under the program have no connection to any specific FBI investigation at the time of their collection. Second, because the records are collected in bulk — potentially encompassing all telephone calling records across the nation — they cannot be regarded as “relevant” to any FBI investigation as required by the statute without redefining the word relevant in a manner that is circular, unlimited in scope, and out of step with the case law from analogous legal contexts involving the production of records. Third, the program operates by putting telephone companies under an obligation to furnish new calling records on a daily basis as they are generated (instead of turning over records already in their possession) — an approach lacking foundation in the statute and one that is inconsistent with FISA as a whole. Fourth, the statute permits only the FBI to obtain items for use in its investigations; it does not authorize the NSA to collect anything.