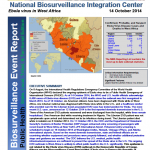 The most recent U.S. case, announced on 12 October 2014 is the first reported domestic transmission in the U.S. Three of the American EVD patients recovered and were discharged from the hospital, while three remain hospitalized. One American died while receiving treatment in Nigeria. The Liberian EVD patient was not symptomatic upon arrival and determined not to be infectious during travel. The Liberian patient died while in isolation on 8 October 2014. On 11 October 2014, the CDC and the Department of Homeland Security’s Customs & Border Protection (CBP) began enhanced entry screening of passengers with recent travel to West Africa at New York’s JFK International Airport. Enhanced entry screening is scheduled to begin on 16 October 2014 at Washington-Dulles, Newark, Chicago-O’Hare, and Atlanta international airports. Based on the recent domestic transmission, state and federal officials are re- examining whether equipment and procedures were properly followed, and whether additional protective steps and guidance are needed. The CDC believes the U.S. medical, public health infrastructure/responses are sufficient to prevent the spread of the Ebola virus in the U.S. 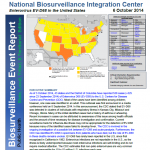 As of 3 October 2014, 43 states and the District of Columbia have reported 538 cases (+325 since 23 September 2014) of Enterovirus D68 (EV-D68) to the U.S. Centers for Disease Control and Prevention (CDC). Most of the cases have been identified among children; however, one case was identified in an adult. This outbreak was first announced in a media conference held on 8 September 2014. In this announcement, the CDC stated that EV-D68 was detected in clusters of individuals with respiratory illness in Kansas City, Missouri and Chicago, Illinois. Many of the initial identified cases had a history of asthma or wheezing. Recent increases in cases can be attributed to awareness of this issue among health officials and the amount of time necessary for disease investigation and confirmation. Current surveillance tools for influenza-like illness may not be appropriate for the detection of EV-D68 because many of the identified cases failed to develop fever. The CDC is involved in the ongoing investigation of a possible link between EV-D68 and acute paralysis. Furthermore, the CDC has identified EV-D68 in specimens from patients who have died, but the role of EV-D68 in these deaths remains unclear. EV-D68 has rarely been reported in the U.S. since first recognized in California in 1962. Enterovirus infections are not reportable in the U.S., so the illness is likely underreported because most enterovirus infections are self-limiting and do not require medical attention. The CDC estimates that non-polio enteroviruses are very common and are responsible for 10 to 15 million U.S. infections each year. 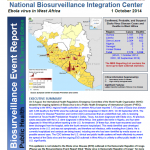 On 8 August, the International Health Regulations Emergency Committee of the World Health Organization (WHO) declared the ongoing epidemic of Ebola virus to be a Public Health Emergency of International Concern (PHEIC). According to the WHO, regional health authorities in western Africa have reported 7,178 cases of Ebola virus disease with 3,338 deaths to the WHO since the outbreak was first recognized in March 2014. On 30 September 2014, The U.S. Centers for Disease Prevention and Control (CDC) announced that an unidentified man, who is receiving treatment at Texas Health Presbyterian Hospital in Dallas, Texas, has been diagnosed with Ebola virus. All previous cases associated with the U.S. were diagnosed in West Africa. One patient died while in Nigeria, and four were diagnosed in West Africa before traveling to the U.S. for treatment.