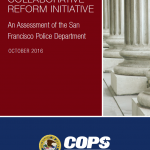 As a result of an extensive independent assessment of the San Francisco Police Department’s (SFPD) activities and operations, the U.S. Department of Justice (DOJ) Office of Community Oriented Policing Services (COPS Office) presents findings and recommendations on how to address the agency’s needs proactively in a long-term manner to improve trust between the SFPD and the communities it serves. 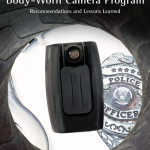 Police leaders who have deployed body-worn cameras say there are many benefits associated with the devices. They note that body-worn cameras are useful for documenting evidence; officer training; preventing and resolving complaints brought by members of the public; and strengthening police transparency, performance, and accountability. In addition, given that police now operate in a world in which anyone with a cell phone camera can record video footage of a police encounter, body-worn cameras help police departments ensure events are also captured from an officer’s perspective.