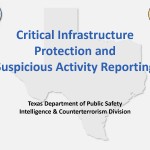 An August 2013 presentation from the Texas Department of Public Safety Intelligence & Counterterrorism Division focusing on suspicious activity reporting in relation to critical infrastructure, particularly dams. The presentation is noteworthy for its reference to the use of TrapWire, a private surveillance product designed to correlate suspicious activity across a variety of domains to detect per-operational indicators of terrorist activity.

A number of hacked emails from the private intelligence firm Stratfor have shed light on a global suspicious activity surveillance system called TrapWire, that is reportedly in use in locations around the world from the London Stock Exchange to the White House. The emails, which were released yesterday by WikiLeaks, provide information on the extent and operations of a system designed to correlate suspicious activity reports and other evidence that may indicate surveillance connected with a potential terrorist attack.

Trap Wire dramatically increases the ability to detect pre-attack preparations and to take appropriate action to detect, deter and intercept tenorist attacks. A visual monitor of the entire system-a map with dynamic status indicators for each entity connected to the Trap Wire network- facilitates the ability of decisionmakers to absorb vast quantities of information quickly and efficiently. The dynamic status indicators show the threat level at each facility and highlight those that have moved to a higher threat level over the preceding 24 hours. Security officials can thus focus on the highest priorities first, taking a proactive and collaborative approach to defense against attacks. The information collected by Trap Wire can also be shared with law enforcement agencies to assist in their counterterrorism efforts.