The Palestinian National Early Recovery and Reconstruction Plan for Gaza, 2009 ‐ 2010 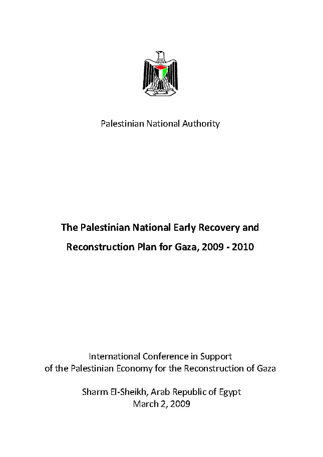 EXECUTIVE SUMMARY
This document has been prepared by the Palestinian National Authority’s Ministry of Planning with support from all line ministries, UN agencies, the EC, the World Bank and other partners. This plan will be used to consolidate resources and responses to help the Palestinian people in Gaza rebuild their lives and livelihoods, and as such will form the basis for mobilizing resources and efforts at the international conference in Egypt on March 2, 2009 and provide the guiding framework for all early recovery and reconstruction interventions.

The first section of the document provides an overview of the situation in Gaza after Israel’s three-week military offensive, and sets out how the plan to address it was formulated. The plan is the result of consultations and coordination with government institutions and numerous local and international partners, and it delineates responsibility for following up the planning and coordination processes in the implementation phase. The Early Recovery and Reconstruction Plan will be explicitly linked to the key national policy priorities as outlined in the Palestinian Reform and Development Plan (PRDP), and will consequently be complementary to the Palestinian National Authority’s existing efforts to alleviate poverty through increasing employment and revitalizing the economy. The Gaza Early Recovery Rapid Needs Assessment forms the backbone of the plan, underpinning both the early recovery projects and the medium-to- longer term reconstruction interventions. Conducted by PNA Ministries and Agencies with the support of local and international partners, it uses the situation prior to 27th December 2008 as a baseline but contextualizes it within the experience of Israel’s long and continuing blockade of Gaza. It is worth noting that while the PNA views as urgent the need to assist our people to rebuild their lives as quickly and efficiently as possible, and we look to the world to help us, we hold Israel responsible for the injury and damage it has caused in Gaza.

In the social sector, the plan documents how Gaza’s emergency and primary health care systems were overstretched and under-supported during the Israeli offensive, and many medical facilities sustained severe damage. Border closures have prevented the flow of crucial medical supplies and the transfer of high risk medical cases, and the capacity to respond rapidly to emergency cases has been significantly diminished. Numerous education establishments, from kindergarten to university level, also suffered extensive damage. Primary caregivers have had trouble providing the most basic human security even for themselves, and many were killed or injured in the offensive. The lack of access to basic commodities further compounds the problems facing vulnerable people, particularly children and young people, whose psycho-social wellbeing was also considerably worsened by the Israeli assault. The social safety sector has been particularly affected, and a number of orphanages, disability centers and service centers for vulnerable persons have been damaged. More importantly, the number of poor, unsheltered persons, disabled, orphans, and female headed households has increased, which places additional burdens on the remaining social safety network. Mosques, cultural institutions and historic buildings also suffered extensive damage in the indiscriminate bombardment. Total needs in the social sector arising from the Israeli assault amount to $315 million.

Essential infrastructure sustained severe damage during the Israeli bombardment and invasion, and $502 million is required to repair it. The assault severely impacted the provision of basic services, and humanitarian and recovery assistance to the affected population. Large areas have been reduced to rubble, with 15,000 houses damaged or destroyed, and extensive disruption caused to water and sanitation networks, energy supplies and facilities, roads and bridges, and the telecommunications system. The plan documents the severe effects of the Israeli attack on Gaza’s already-weakened economy. The agriculture sector was severely affected, with the widespread destruction of cultivated land, greenhouses, livestock and poultry farms, water wells, irrigation networks and other productive assets. 14.6% of the total cultivated area was completely destroyed, and with many families also losing their homes and livelihoods, this will have a negative impact on food security. Much of the remaining capital stock and employment opportunities were also destroyed, and the economy will only be able to recover after the blockade is lifted, liquidity returns to the financial system, and the overall macroeconomic environment is
stabilized. The plan requests $412 million in support for the private sector in Gaza.

In terms of governance, the plan documents how the majority of citizens in Gaza witnessed a breakdown in channels for public decision-making, protection, and human rights. The civil society sector was also severely damaged, leading to social fragmentation and a collapse of civilian structures. In addition, many families were displaced, household bread-winners were killed, and people were imprisoned without recourse to legal aid. The assault also resulted in the destruction of physical infrastructure used by local authorities for public administration purposes, as well as the displacement or death of civil servants. As a result, normal governmental functions such as administrating social services have been considerably retarded or entirely disrupted, and $68 million is required for improvements in this sector. Finally the Rapid Needs Assessment details the destruction Israeli army caused to natural resources and the environment. Fragile ground-water resources were severely compromised, particularly from the destruction of the waste-water infrastructure, which released hundreds of thousands of cubic meters of raw sewage into the environment. Additionally, this contaminated productive land was also damaged by heavy-tracked military vehicles and Israeli chemical munitions. The inaccessibility of waste disposal sites overwhelmed the solid waste management sector, and resulted in the creation of numerous informal dumping grounds and indiscriminate burning of rubbish, with potentially severe impacts on the environment and public health. Much of the rubble resulting from the bombardment is contaminated with asbestos, and unexploded ordnance remains a significant threat to life. Cleaning up Israel’s mess is projected to cost $29 million.

The guiding principles for recovery and reconstruction in all these sectors include Palestinian ownership of the process through the leadership of the PNA, effective and efficient use of resources, building back better to ensure permanent qualitative improvements, and the promotion of local capacities to ensure that all benefits of reconstruction accrue to Palestinian citizens. In order to address the needs of people in Gaza in an integrated and coordinated way, early recovery priority interventions must ensure that sectoral and sub-sectoral needs are considered in relation to each other. For example, housing is linked to the water and sanitation needs of affected families, which in turn is linked to issues of availability of parts and equipment.

The Flash Appeal launched in February 2009 addresses the immediate humanitarian needs of the Palestinian people in Gaza, and also includes time critical early recovery components. This plan, by building and expanding on a number of these interventions, provides the bridge between short-term relief and medium and longer-term development. The ultimate goal is to integrate the reconstruction of Gaza within the Palestinian Reform and Development Plan (PRDP) and its planning and budgeting processes. Further analysis of the situation in Gaza will be undertaken in the coming months by relevant Ministries, in close consultation with UN Agencies, the World Bank, the EC, and other partners to refine and develop this plan. Donors should be guided by Paris Principles on Aid Effectiveness and are encouraged to use existing national systems, such as financing, procurement and auditing, in implementing the Plan. We are encouraging donors first and foremost to channel assistance for the Palestinian Early Recovery and Reconstruction Plan for Gaza through the Single Treasury Account, as direct, un-earmarked budget support.

In addition, donors can provide support through existing mechanisms such as PEGASE, the PRDP Trust Fund and other World Bank program co-financing mechanisms, Arab and Islamic development funds, and other established channels such as UN Agencies which can facilitate swift and effective recovery and reconstruction activities guided by this plan. The PNA will coordinate all these financing mechanisms and channels in order to ensure full coverage of needs, prevent redundancy, and promote mutual accountability and responsibility during implementation. The PNA will use the existing PRDP system of monitoring and evaluation, in line with World Bank and IMF quarterly reporting requirements, to ensure transparent, efficient and accountable implementation. Government expenditure has always played a vital role in the economy of Gaza, and has become a lifeline for people there since June 2007. Recurrent expenditure has amounted to around $120 million per month, mainly spent on salaries, social hardship cases, medical referrals, and Gaza’s electricity, fuel and water imports. The projected shortfall in recurrent expenditure in the 2009 budget is $1.15 billion, but the additional needs in Gaza created by the Israeli siege and military assault will increase the financial burden on the PNA by an estimated $300 million during 2009 alone to cover emergency shelter, fuel and electricity bills, and medical and social needs. Therefore, as well as the $1.326 billion in early recovery and reconstruction interventions, donors are being asked to provide $1.45 billion in budget support and supplementary emergency budget support for Gaza in 2009. It will be important that political risk does not jeopardize the security of the renewed investment we are calling for, and we will work towards reconciliation and national unity. Ultimately, however, for the plan to succeed it will be vital that access to Gaza is opened up, and Israel’s merciless siege of 1.5 million Palestinians is lifted.