(U//FOUO/LES) U.S. Army “We Are Not Your Soldiers” Anti-War Protest Warning October 2009 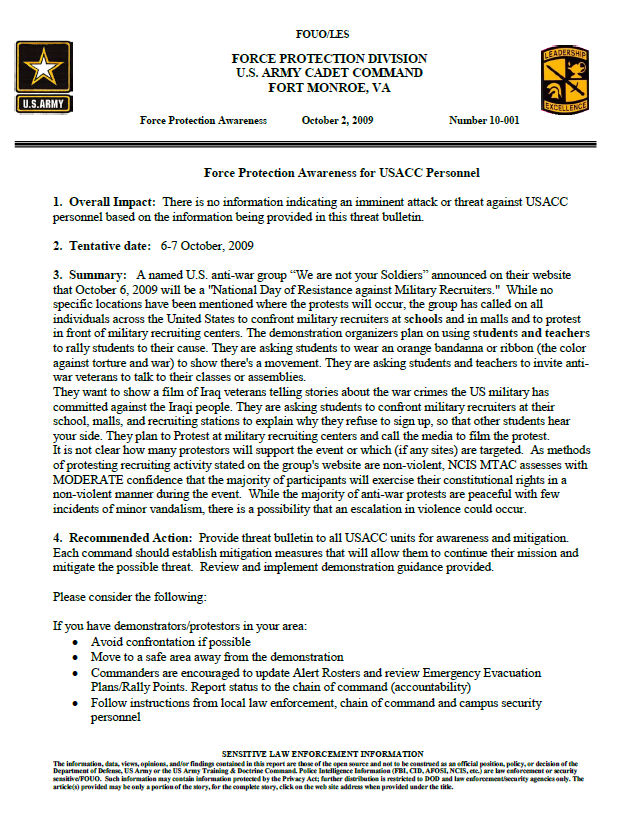 ﻿1. Overall Impact: There is no information indicating an imminent attack or threat against USACC personnel based on the information being provided in this threat bulletin.

3. Summary: A named U.S. anti-war group “We are not your Soldiers” announced on their website that October 6, 2009 will be a “National Day of Resistance against Military Recruiters.” While no specific locations have been mentioned where the protests will occur, the group has called on all individuals across the United States to confront military recruiters at schools and in malls and to protest in front of military recruiting centers. The demonstration organizers plan on using students and teachers to rally students to their cause. They are asking students to wear an orange bandanna or ribbon (the color against torture and war) to show there’s a movement. They are asking students and teachers to invite anti-war veterans to talk to their classes or assemblies.

They want to show a film of Iraq veterans telling stories about the war crimes the US military has committed against the Iraqi people. They are asking students to confront military recruiters at their school, malls, and recruiting stations to explain why they refuse to sign up, so that other students hear your side. They plan to Protest at military recruiting centers and call the media to film the protest.
It is not clear how many protestors will support the event or which (if any sites) are targeted. As methods of protesting recruiting activity stated on the group’s website are non-violent, NCIS MTAC assesses with MODERATE confidence that the majority of participants will exercise their constitutional rights in a non-violent manner during the event. While the majority of anti-war protests are peaceful with few incidents of minor vandalism, there is a possibility that an escalation in violence could occur.

4. Recommended Action: Provide threat bulletin to all USACC units for awareness and mitigation. Each command should establish mitigation measures that will allow them to continue their mission and mitigate the possible threat. Review and implement demonstration guidance provided.

If you have demonstrators/protestors in your area:

• Avoid confrontation if possible
• Move to a safe area away from the demonstration
• Commanders are encouraged to update Alert Rosters and review Emergency Evacuation Plans/Rally Points. Report status to the chain of command (accountability)
• Follow instructions from local law enforcement, chain of command and campus security personnel

Other items to consider:

• Report all Suspicious Activity (could occur while not in a duty status)
• Commanders at all levels should establish relationships with local police, campus security, fusion Centers, and Joint terrorism Task force in order to understand local threats
• Practice OPSEC. (Do not provide personal information to anyone you don’t know)
• Use the buddy system when possible
• Conduct vehicle inspections prior to use
• Do not leave sensitive items, electronic devices or government property or in GOV/POV
• Consider moving vehicles to a more secure area to avoid vandalism
• Soldiers, civilian employees, contractors, and family members need to stay alert, notice surroundings, and remain vigilant
• Keep family members informed