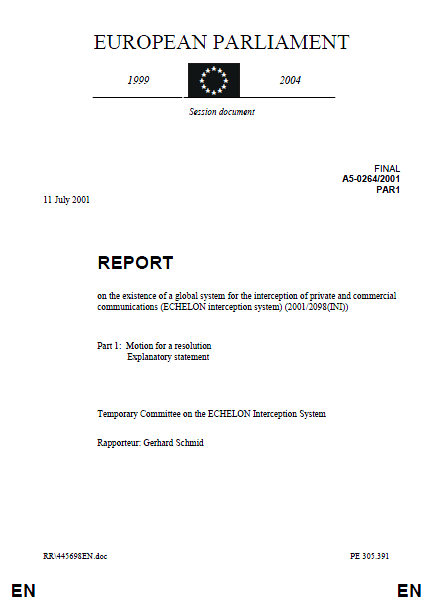 A. whereas the existence of a global system for intercepting communications, operating by
means of cooperation proportionate to their capabilities among the USA, the UK, Canada,
Australia and New Zealand under the UKUSA Agreement, is no longer in doubt; whereas
it seems likely, in view of the evidence and the consistent pattern of statements from a very
wide range of individuals and organisations, including American sources, that its name is
in fact ECHELON, although this is a relatively minor detail,

B. whereas there can now be no doubt that the purpose of the system is to intercept, at the
very least, private and commercial communications, and not military communications,
although the analysis carried out in the report has revealed that the technical capabilities of
the system are probably not nearly as extensive as some sections of the media had
assumed,

C. whereas, therefore, it is surprising, not to say worrying, that many senior Community
figures, including European Commissioners, who gave evidence to the Temporary
Committee claimed to be unaware of this phenomenon,

The limits of the interception system

The possible existence of other interception systems

E. whereas the interception of communications is a method of spying commonly employed by
intelligence services, so that other states might also operate similar systems, provided that
they have the required funds and the right locations; whereas France is the only EU
Member State which is  thanks to its overseas territories  geographically and technically
capable of operating autonomously a global interception system and also possesses the
technical and organisational infrastructure to do so; whereas there is also ample evidence
that Russia is likely to operate such a system, Compatibility with EU law

F. whereas, as regards the question of the compatibility of a system of the ECHELON type
with EU law, it is necessary to distinguish between two scenarios: if a system is used
purely for intelligence purposes, there is no violation of EU law, since operations in the
interests of state security are not subject to the EC Treaty, but would fall under Title V of
the Treaty on European Union (CFSP), although at present that title lays down no
provisions on the subject, so that no criteria are available; if, on the other hand, the system
is misused for the purposes of gathering competitive intelligence, such action is at odds
with the Member States duty of loyalty and with the concept of a common market based
on free competition, so that a Member State participating in such a system violates EC law,

G. having regard to the statements made by the Council at the plenary sitting of 30 March
2000 to the effect that the Council cannot agree to the creation or existence of a
telecommunications interception system which does not comply with the rules laid down in
the law of the Member States and which breaches the fundamental principles designed to
safeguard human dignity,

H. whereas any interception of communications represents serious interference with an
individuals exercise of the right to privacy; whereas Article 8 of the ECHR, which
guarantees respect for private life, permits interference with the exercise of that right only
in the interests of national security, in so far as this is in accordance with domestic law and
the provisions in question are generally accessible and lay down under what circumstances,
and subject to what conditions, the state may undertake such interference; whereas
interference must be proportionate, so that competing interests need to be weighed up and,
under the terms of the case law of the European Court of Human Rights, it is not enough
that the interference should merely be useful or desirable,

I. whereas an intelligence system which intercepted communications permanently and at
random would be in violation of the principle of proportionality and would not be
compatible with the ECHR; whereas it would also constitute a violation of the ECHR if the
rules governing the surveillance of communications lacked a legal basis, if the rules were
not generally accessible or if they were so formulated that their implications for the
individual were unforeseeable, or if the interference was not proportionate; whereas most
of the rules governing the activities of US intelligence services abroad are classified, so
that compliance with the principle of proportionality is at least doubtful and breaches of the
principles of accessibility and foreseeability laid down by the European Court of Human
Rights probably occur,

J. whereas the Member States cannot circumvent the requirements imposed on them by the
ECHR by allowing other countries’ intelligence services, which are subject to less stringent
legal provisions, to work on their territory, since otherwise the principle of legality, with its
twin components of accessibility and foreseeability, would become a dead letter and the
case law of the European Court of Human Rights would be deprived of its substance, 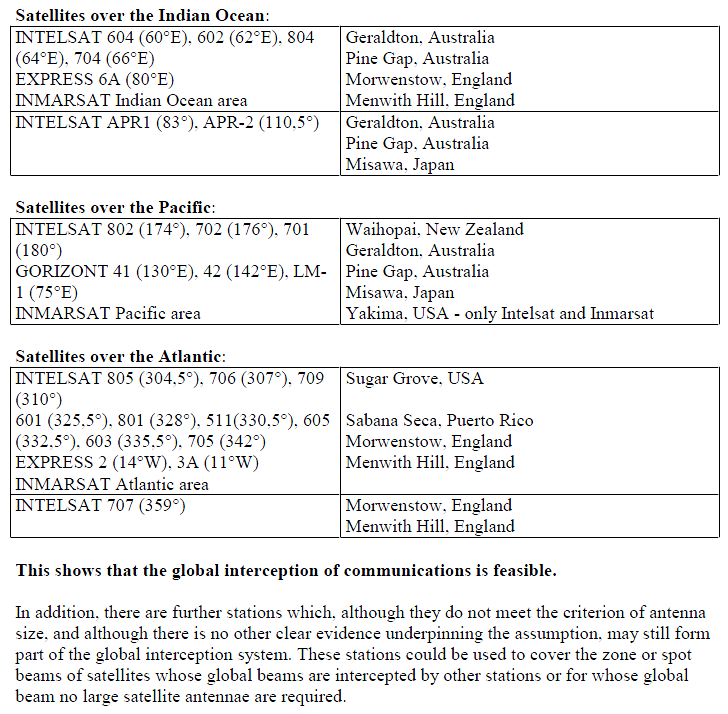