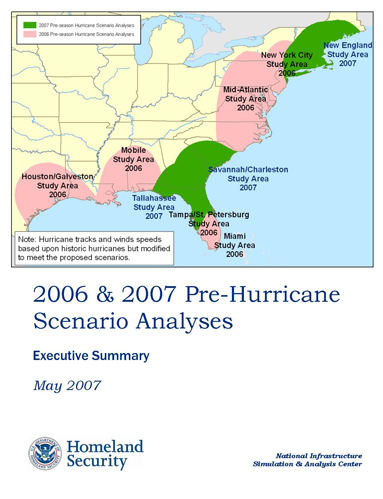 In this effort, a series of scenario analyses were conducted for 9 simulated hurricanes, making landfall in regions at high risk due to hurricanes. The risk-based selection approach was based on historic hurricane activity from the period 1851-20041, the population at risk, and potential infrastructure impacts. Figure 1 depicts the overall risk posed by hurricane strikes.

The overall risk was calculated by multiplying a likelihood factor by a consequence factor. The likelihood factor is a measure of the probability of a hurricane impacting that area, based upon the historical frequency of hurricanes. The infrastructure consequence was calculated by developing a wind damage contour for each historical hurricane path, based upon its intensity, and then summing these damage contours. A consequence factor was developed as a function of population living in each county. The result is a map of hurricane risk at the county level. The higher risk counties, colored in yellow, orange, and red, are areas where there could be high financial costs, major damage to key infrastructures, and large population displacement resulting from a major hurricane making landfall in that area. 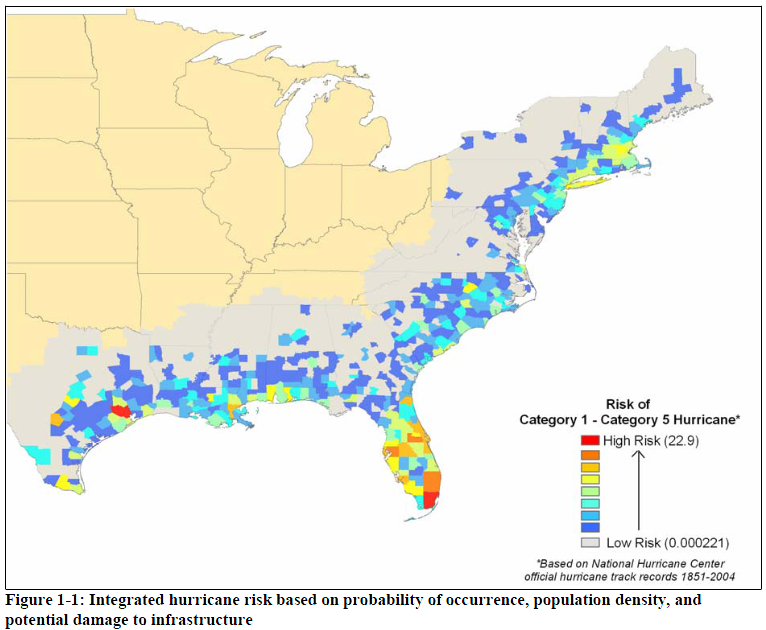 For the scenarios, hurricane strengths for each location were selected at the upper end of the possible range for the region. These “worst case” strengths were chosen, rather than typical or expected strengths, to enhance identification of problems and issues during the scenario analysis. The 9 impact zones analyzed are shown in Figure 2. 6 higher-risk areas were analyzed in 2006, and 3 additional areas were analyzed in 2007. NISAC is currently updating its databases for the New Orleans region based on post-Katrina assessments and is reassessing its hurricane swath analysis. Other CI/KR database updates will periodically be considered in swath recalculations. 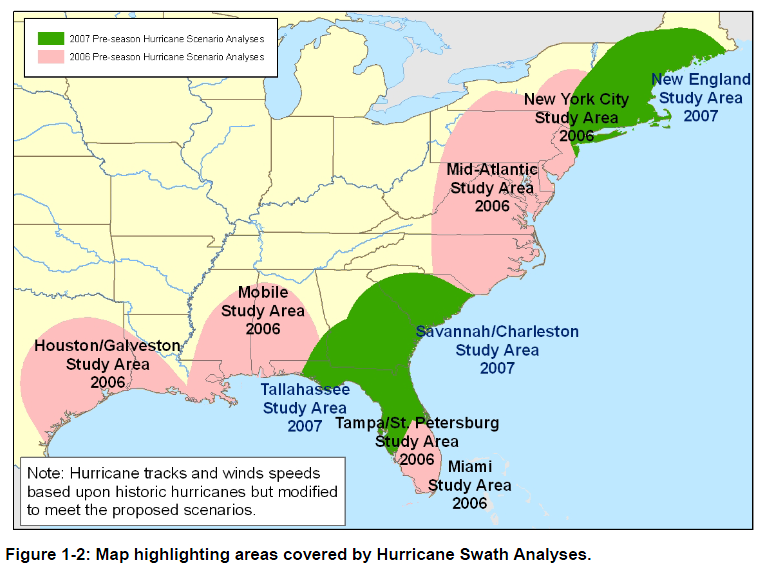 Combined, these 9 areas represent many of the major metropolitan areas that could be significantly impacted by a hurricane.

Although the historic probability of a hurricane strike on this area is lower than that for the Gulf Coast and Southeastern Coast, the impacts to population and infrastructure could be significant. The New York City area is a very important world financial center and contains port facilities essential for the flow of commerce. The hurricane used as a basis for this scenario was the hurricane of 1938 that came ashore on Long Island. The NISAC team shifted the storm trajectory to the west to maximize the effects on Manhattan, and the intensity was increased to a Category 3 storm at landfall. Storm surge was calculated based on a stronger storm (Category 5) in the Atlantic that weakens before making landfall.

The New England area was chosen because of the political and economic importance of the area. A major hurricane striking this area could temporarily close airports and seaports in Rhode Island, Massachusetts, and Connecticut. A major hurricane making landfall in this area would also affect local military facilities and the defense industrial base. The characteristics used for this storm were based upon the May 2007 Hurricane Yvette exercise scenario.

The Mid-Atlantic area was chosen because of the political and economic importance of the area. A major hurricane striking this area could impact some operations of the federal government, temporarily close seaport ports in Baltimore and Norfolk, and affect nearby military facilities. The characteristics used for this storm were based upon Hurricane Isabel that made landfall in the Mid-Atlantic States in September 2003. NISAC moved the storm track slightly north and strengthened the storm to a strong Category 4 hurricane at landfall to maximize the effect.

The Savannah area has a lower historic frequency for severe hurricane impacts, as compared with other hurricane-prone regions. Major issues could include evacuation of population in response to projected surge and power outages. The wind characteristics used for this storm are based upon Hurricane Katrina’s landfall in August 2005 in Buras, Louisiana. The storm track is based upon a hurricane that made landfall in 1898 near Savannah, Georgia.

The Miami, Florida area was chosen because of the high risk of hurricanes impacting this area. There are over 2.2 million people residing in Miami-Dade County. Miami-Dade also ranks fifth in the world among telecommunications centers. A major hurricane striking this area could temporarily close the region’s seaports and several airports. The storm characteristics used for this study were based upon Hurricane Andrew, which made landfall in August 2002 south of the Miami area. This Category 5 storm track was moved slightly north to maximize the effects on Miami.

The Tampa/St. Petersburg, Florida area was chosen because of the high risk of hurricanes impacting this area and its importance to the area for providing petroleum products to Florida. A major hurricane striking this area could temporarily close seaport facilities in Tampa area, the entry point for many of the refined products for Central and Southern