Several restricted intelligence reports from the Counter-Terrorism Unit of the Federal Bureau of Prisons obtained by Public Intelligence detail the incredible levels of surveillance conducted on inmates convicted of terrorism offenses.  In particular, the reports detail inmates stored in secretive units known as “Communication Management Units” (CMU) which have been widely criticized by the ACLU and other human rights groups for placing severe restrictions on the activities, as well as visitation and communication rights of inmates housed in the facilities.

There are known to be at least two CMU facilities, one in the United States Penitentiary at Terre Haute, Indiana (THA CMU) and another in the United States Penitentiary at Marion, Illinois (MAR CMU).  All written correspondence to or from the inmates in these facilities is reviewed by staff and may be rejected.  All telephone communications with the inmates must be live-monitored by staff, recorded and analyzed, and must be in English.  Requests for non-English conversations must be made ten days in advance and must be monitored by a translator.  In addition to these restrictions, the number and frequency of calls is greatly reduced from the 300 minutes per month available to general population inmates to one call per week with a maximum length of fifteen minutes.  At the warden’s discretion, the length of this call may be reduced to three minutes.  All visitation with inmates housed in a CMU are conducted in “non contact” facilities, separated by glass and communicating through a telephone.  These visits are also restricted to twice per month for two hours at a time.  According to a 2009 Democracy Now interview with the attorney of Daniel McGowan, an environmental activist imprisoned at the CMU in Terre Haute, Indiana, the inmates refer to the facility as “Little Guantanamo” and have speculated that they believe prisoners from the real Guantanamo Bay may be transferred there following the facility’s closure.

The documents obtained by Public Intelligence are raw intelligence reports from Federal Bureau of Prisons analysts detailing the intimate surveillance of each inmates communications during the reporting period.  Each report summarizes a particular detainees communications of interest, describing in great detail the source or destination of the communication with complete phone numbers and addresses, as well as the contents of the communication.  Sometimes, the reports appear to be dealing with communications that are legitimately made to people and organizations connected with an inmate’s criminal history, such as white supremacists contacting other known white supremacists.  However, many of the communications that are monitored are nothing more than mundane conversations to family and extended relatives.  For example, the communications of Ali Sofyan, an inmate of the Terre Haute CMU, are intensely scrutinized as he discusses his desire for a new Qur’an, describing how he would also like to sing passages from Yemeni wedding songs to the other prisoners.  Another inmate, Essam El Shami, is discussed over multiple pages in one of the reports for corresponding with his wife and son.  The analyst even feels the need to quote entire passages from a letter to El Shami’s son:

“Keep on praying and take care of the school and work, and soon, after daddy is released, 6-8 months later, no one of you have to work again and daddy will take good care of you all and give you all the money that you all needed. Who knows? You could have your own business, but first the college. Son, again I don’t need to tell, take care of mama. She is all we get. She is our angel.”

One report simply states that an inmate by the name of John Pankins has changed religions from Protestant to Muslim.  The analyst tries to ascertain the “reasoning or influence” behind such a decision, but ultimately is unsuccessful.  Pankins is listed as being incarcerated at the Marion, Illinois CMU despite having committed offenses with no connection to terrorism.

There are also several instances of what appears to be illegal monitoring of confidential communications conducted under attorney-client privilege.  According to the official U.S. Department of Justice rules for the CMU at Terre Haute, “under no circumstances will privileged attorney-client communication be monitored, as prohibited by national policy.”  However, there are examples of the monitoring of authorized attorney-client communications in the documents.  One example concerns Stanislaus Meyerhoff, who is described as authorizing an email message with his attorney, Richard L. Fredericks, on August 4, 2009.  Despite this authorization, the contents of the email are summarized in the report and excerpts are directly quoted.  This echoes the statements of Lauren Regan, the attorney for Daniel McGowan interviewed in 2009 on Democracy Now, who said that at least one of her attorney-client privileged letters had been opened by the Terre Haute CMU staff.  Regan noted that the analysts even made comments on her discussion of McGowan’s legal strategy. 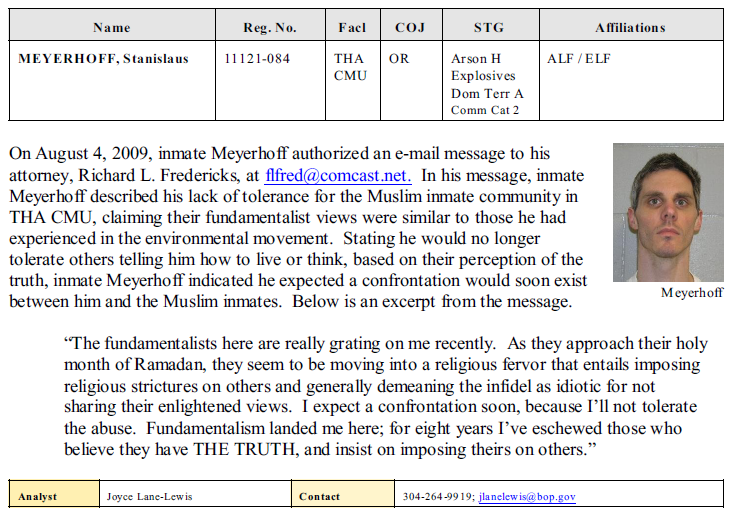 This excerpt from one of the documents demonstrates the apparently illegal surveillance of legally privileged attorney-client communications.