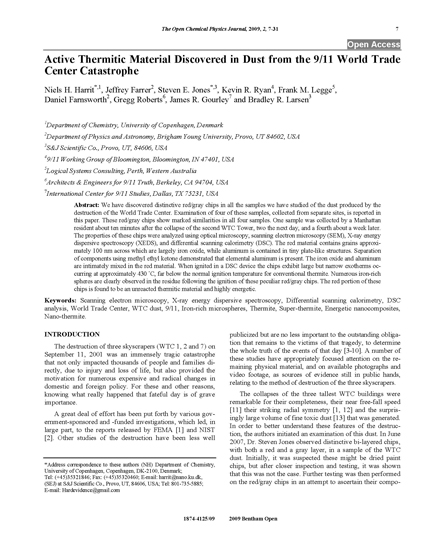 Abstract: We have discovered distinctive red/gray chips in all the samples we have studied of the dust produced by the destruction of the World Trade Center. Examination of four of these samples, collected from separate sites, is reported in this paper. These red/gray chips show marked similarities in all four samples. One sample was collected by a Manhattan resident about ten minutes after the collapse of the second WTC Tower, two the next day, and a fourth about a week later. The properties of these chips were analyzed using optical microscopy, scanning electron microscopy (SEM), X-ray energy dispersive spectroscopy (XEDS), and differential scanning calorimetry (DSC). The red material contains grains approximately 100 nm across which are largely iron oxide, while aluminum is contained in tiny plate-like structures. Separation of components using methyl ethyl ketone demonstrated that elemental aluminum is present. The iron oxide and aluminum are intimately mixed in the red material. When ignited in a DSC device the chips exhibit large but narrow exotherms occurring at approximately 430 °C, far below the normal ignition temperature for conventional thermite. Numerous iron-rich spheres are clearly observed in the residue following the ignition of these peculiar red/gray chips. The red portion of these chips is found to be an unreacted thermitic material and highly energetic.

1. Provenance of the Samples Analyzed for this Report In a paper presented first online in autumn 2006 regarding anomalies observed in the World Trade Center destruction a general request was issued for samples of the WTC dust. The expectation at that time was that a careful examination of the dust might yield evidence to support the hypothesis that explosive materials other than jet fuel caused the extraordinarily rapid and essentially total destruction of the WTC buildings.

It was learned that a number of people had saved samples of the copious, dense dust, which spread and settled across Manhattan. Several of these people sent portions of their samples to members of this research group. This paper discusses four separate dust samples collected on or shortly after 9/11/2001. Each sample was found to contain red/gray chips. All four samples were originally collected by private citizens who lived in New York City at the time of the tragedy. These citizens came forward and provided samples for analysis in the public interest, allowing study of the 9/11 dust for whatever facts about the day might be learned from the dust. A map showing the locations where the four samples were collected is presented as Fig. (1). 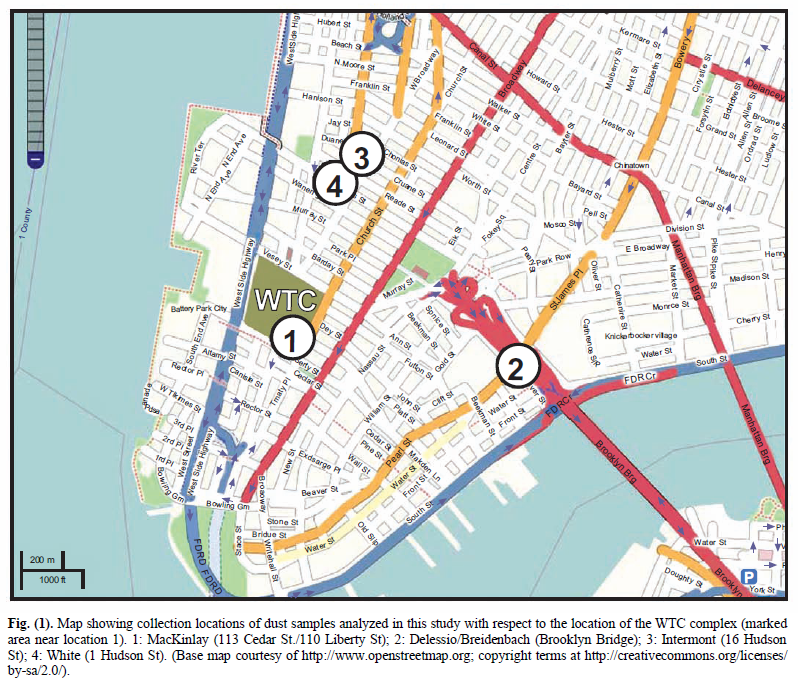 1. Characterization of the Red/Gray Chips Red/gray chips were found in all of the dust samples collected. An analysis of the chips was performed to assess the similarity of the chips and to determine the chemistry and materials that make up the chips. Fig. (2) displays photomicrographs of red/gray chips from each of the four WTC dust. Note the scale marker in each image as they were
acquired at different magnifications. At approximately 2.5 mm in length, the chip in Fig. (2a) was one of the larger chips collected. The mass of this chip was approximately 0.7 mg. All of the chips used in the study had a gray layer and a red layer and were attracted by a magnet. The inset image in Fig. (2d) shows the chip in cross section, which reveals the gray layer. The gray layer is also partially visible in Fig. (2b). Similarities between the samples are already evident from these photographs.

Fig. (3) shows three images for comparison of views ofthe same set of chips using different methods. Fig. (3a) is a VLM photomicrograph of a group of particles, which shows the red material and in some cases the adhering gray material. Fig. (3b, c) are, respectively, a secondary electron (SE) image and a backscattered electron (BSE) image of the same group of particles, using a scanning electron microscope (SEM) without a conductive coating over the sample. It can be seen in the SE image that the red layer of the particles has very bright regions caused by a slight accumulation of charge under the electron beam, owing to the relatively poor conductivity of the red layer (see Discussion section). The BSE image shows the red layer darker than the gray layer, indicating that the red layer is composed of material that has a relatively lower average atomic number than the gray layer. 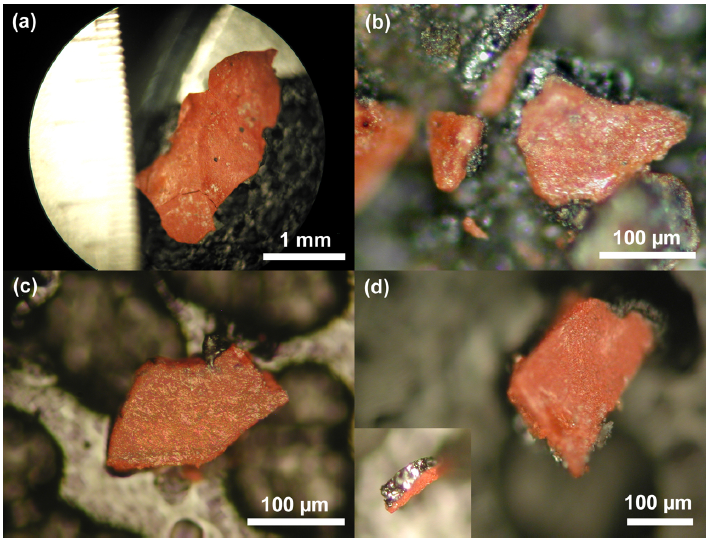 We measured the resistivity of the red material (with very little gray adhering to one side) using a Fluke 8842A multimeter in order to compare with ordinary paints, using the formula:

Given the small size of the red chip, about 0.5 mm x 0.5 mm, we used two probes and obtained a rough value of approximately 10 ohm-m. This is several orders of magnitude less than paint coatings we found tabulated which are typically over 1010 ohm-m. Another test, described above, involved subjection of red chips to methyl ethyl ketone solvent for tens of hours, with agitation. The red material did swell but did not dissolve, and a hard silicon-rich matrix remained after this procedure. On the other hand, paint samples in the same exposure to MEK solvent became limp and showed significant dissolution, as expected since MEK is a paint solvent. Further, we have shown that the red material contains both elemental aluminum and iron oxide, the ingredients of thermite, in interesting configuration and intimate mixing in the surviving chips (see Results, section 1). The species are small (e.g., the iron oxide grains are roughly 100 nm across) in a matrix including silicon and carbon, suggesting a superthermite composite. Red chips when ignited produce very high temperatures even now, several years after the 9/11 tragedy, as shown by the bright flash observed and the production of molten iron-rich spheres (see photomicrographs in Fig. (20) above). Correspondingly, the DSC tests demonstrate the release of high enthalpy, actually exceeding that of pure thermite. Furthermore, the energy is released over a short period of time, shown by the narrowness of the peak in Fig. (29). The post-DSC-test residue contains microspheres in which the iron exceeds the oxygen content, implying that at least some of the iron oxide has been reduced in the reaction. If a paint were devised that incorporated these very energetic materials, it would be highly dangerous when dry and most unlikely to receive regulatory approval for building use. To merit consideration, any assertion that a prosaic substance such as paint could match the characteristics we have described would have to be accompanied by empirical demonstration using a sample of the proposed material, including SEM/XEDS and DSC analyses. 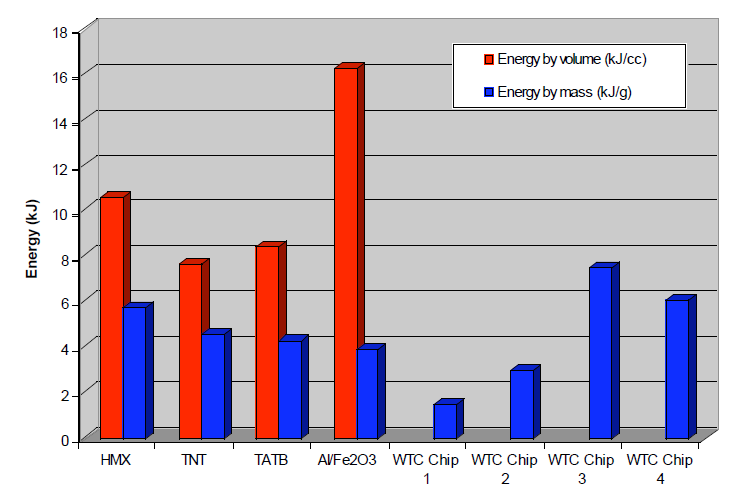