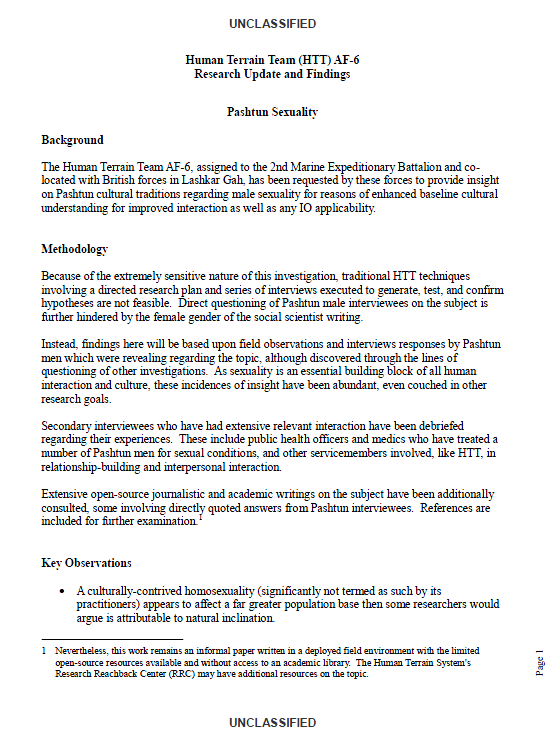 Military cultural awareness training for Afghanistan often emphasizes that the effeminate
characteristics of male Pashtun interaction are to be considered “normal” and no indicator of a
prevalence of homosexuality. This training is intended to prevent servicemembers from reacting
with typically western shock or aversion to such displays. However, slightly more in-depth
research points to the presence of a culturally-dependent homosexuality appearing to affect a far
greater population base then some researchers would argue is attributable to natural inclination.
To dismiss the existence of this dynamic out of desire to avoid western discomfort is to risk
failing to comprehend an essential social force underlying Pashtun culture—one with a variety of
potential implications upon the efficacy and applicability of ISAF efforts and on the long-term
future of Afghan society.

HTT is often approached for advice by US and British servicemembers who report
encounters with men displaying apparently homosexual tenancies. These servicemembers are
frequently confused in the interpretation of this behavior. The British newspaper article below
may be written with an attempt at humor, yet the Marines quoted typify the reaction often seen in
servicemembers upon their initial encounters with Pashtun males. As HTT has observed with
frequency while on patrols in Helmand and Kandahar provinces, these men are outwardly
affectionate toward both one another and male ISAF members, are extremely gentle in their
demeanor and touch, and have often taken great care in embellishing their personal appearance
with fingernails dyed red, hair and beards hennaed in careful patterns, and eyes very occasionally
subtly outlined.

This incident was later re-examined in conversation with a group ofAmerican
interviewees who together and individually spoke with many, many years experience working
directly with the culture in country. They reminded me that one of the country’s favorite
sayings is “women are for children, boys are for pleasure.” One the interviewees shared stories
of how groups of men, ie. shepherding parties, would always travel with one boy “for fun.”
Sadly, the talented young mechanic came immediately to mind. HTT produced a picture of him
with the group of drivers, and the interviewees were quite confident that their worst suspicions
were correct. One interviewee then told the story of a time he found a 14-year-old boy quite
literally in the hands of a group ofAfghan security guards under his command. He physically
fought the guards to free the boy and drove him back to Kabul, hours away, returning him home
to his family, from whom he had apparently been forcibly taken in order to travel with the
guards.