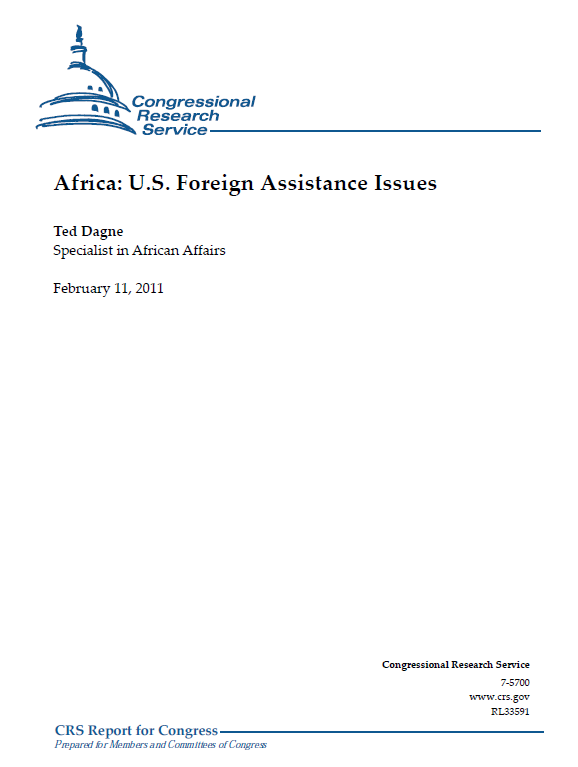 U.S. aid to Africa initially reached a peak in 1985, when global competition with the Soviet Union was at a high point. After the cold war ended, security assistance levels for Africa began to decline. In 1995, at the outset of the 104th Congress, substantial reductions in aid to Africa had been anticipated, as many questioned the importance of Africa to U.S. national security interests in the post-cold war era. As the debate went forward, however, congressional reports and bills emphasized U.S. humanitarian, economic, and other interests in Africa. Aid levels did fall, but gradually began to increase again in FY1997. U.S. assistance to Africa is reaching new highs due to a significant increase in health care sectors under the Global Health and Child Survival (GHCS) program. U.S. aid to Africa nearly quadrupled from $1.2 billion in FY2006 to $6.7 billion in FY2010. Moreover, the United States is the leading donor of humanitarian assistance to Africa. Between FY1999 and FY2009, the United States provided over $10.1 billion to East and Central African countries and an estimated $2.2 billion to Southern Africa countries.

U.S. assistance reaches Africa through a variety of channels, including USAID-administered
Development Assistance (DA) and GHCS programs, food aid programs, and refugee assistance.
As of February 2010, the Peace Corps had an estimated 2,620 volunteers and trainers in 29
African countries. The U.S. African Development Foundation (ADF) makes small grants to
cooperatives, youth groups, and self-help organizations and operates in 20 countries. The Obama
Administration has requested $30 million for ADF for FY2011. U.S. security assistance, though
still far below levels seen in the 1980s, has increased in recent years, primarily because of U.S.
support for African peacekeeping and counter-terrorism initiatives. The World Bank’s
International Development Association (IDA) is the principal multilateral channel for U.S. aid,
but the United States also contributes to the African Development Bank and Fund and to United
Nations activities in Africa.

Total U.S. foreign assistance to Africa for FY2009 was $8.2 billion. More than half of the
FY2009 funding went to health-related programs. Sub-Saharan Africa is expected to receive an
estimated $7.05 billion in FY2010. The Obama Administration has requested an estimated $7.6
billion for FY2011.