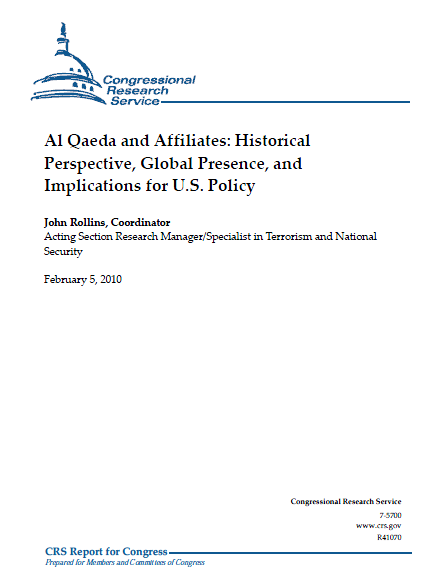 Al Qaeda (AQ) has evolved into a significantly different terrorist organization than the one that perpetrated the September 11, 2001, attacks. At the time, Al Qaeda was composed mostly of a core cadre of veterans of the Afghan insurgency against the Soviets, with a centralized leadership structure, made up mostly of Egyptians. Most of the organization’s plots either emanated from the top or were approved by the leadership. Some analysts describe pre-9/11 Al Qaeda as akin to a corporation, with Osama Bin Laden acting as an agile Chief Executive Officer issuing orders and soliciting ideas from subordinates.

Some would argue that the Al Qaeda of that period no longer exists. Out of necessity, due to
pressures from the security community, in the ensuing years it has transformed into a diffuse
global network and philosophical movement composed of dispersed nodes with varying degrees
of independence. The core leadership, headed by Bin Laden and Ayman al-Zawahiri, is thought to
live in the mountainous tribal belt of northwest Pakistan, where it continues to train operatives,
recruit, and disseminate propaganda. But Al Qaeda franchises or affiliated groups active in
countries such as Yemen and Somalia now represent critical power centers in the larger
movement. Some affiliates receive money, training, and weapons; others look to the core
leadership in Pakistan for strategic guidance, theological justification, and a larger narrative of
global struggle. Over the past year senior government officials have assessed the trajectory of Al
Qaeda to be “less centralized command and control, (with) no clear center of gravity, and likely
rising and falling centers of gravity, depending on where the U.S. and the international focus is
for that period.” While a degraded corporate Al Qaeda may be welcome news to many, a trend
has emerged over the past few years that some view as more difficult to detect, if not potentially
more lethal.

The Al Qaeda network today also comprises semi-autonomous or self radicalized actors, who
often have only peripheral or ephemeral ties to either the core cadre in Pakistan or affiliated
groups elsewhere. According to U.S. officials Al Qaeda cells and associates are located in over 70
countries. Sometimes these individuals never leave their home country but are radicalized with
the assistance of others who have traveled abroad for training and indoctrination through the use
of modern technologies. In many ways, the dispersion of Al Qaeda affiliates fits into the larger
strategy of Bin Laden and his associates. They have sought to serve as the vanguard of a religious
movement that inspires Muslims and other individuals aspiring to join a jihadi movement to help
establish a global caliphate through violent means. The name “Qaeda” means “base” or
“foundation,” upon which its members hope to build a robust, geographically-diverse network.
Understanding the origins of Al Qaeda, its goals, current activities, and prospective future
pursuits is key to developing sound U.S. strategies, policies, and programs. Appreciating the
adaptive nature of Al Qaeda as a movement and the ongoing threat it projects onto U.S. global
security interests assists in many facets of the national security enterprise; including, securing the
homeland, congressional legislative process and oversight, alignment of executive branch
resources and coordination efforts, and prioritization of foreign assistance.