UPDATE: There is now, apparently, an available version of the complete Inspire magazine, “uncorrupted” by any cupcake debris. See:

Recent reports of an English-language “al-Qaeda magazine” were dealt with in mostly uncritical terms by the majority of news outlets.  Wired’s Danger Room blog described how the new magazine was an attempt “to move politically frustrated Muslim youth in the West down the road of violent extremism” by filling that “inexplicably vacant media space between O: The Oprah Magazine, Popular Mechanics and the al-Qaida book Knights Under The Prophet’s Banner”.  FOXNews quotes Brookings Institution fellow Bruce Reidel as saying that the magazine is “clearly intended for the aspiring jihadist in the U.S. or U.K. who may be the next Fort Hood murderer or Times Square bomber”.  The Daily Beast quotes U.S. government officials as saying that the “U.S. government is aware of this new propaganda vehicle by al Qaeda in Yemen and Anwar Awlaki”  and that “AQAP and Awlaki are clearly trying to incite terrorist activity overseas, and to recruit new extremists. The packaging of this magazine may be slick, but the contents are as vile as the authors.”

However, few authors have taken the time to understand the obvious signs indicating that “Inpsire magazine” is not an authentic production of AQAP.  In fact, the 63 pages of “garbled images” which has been described as the result of a virus corrupting the file, is nothing more than a ASCII text dump of the first page of a book of cupcake recipes published by Ellen DeGeneres’ talk show.  The first page of the “Best Cupcakes in America” written by Dulcy Israel is available from the website of Main Street Cupcakes in Ohio at the following URL:

http://www.mainstreetcupcakes.com/ellenbca.pdf (link is now dead – use our mirror of the file) 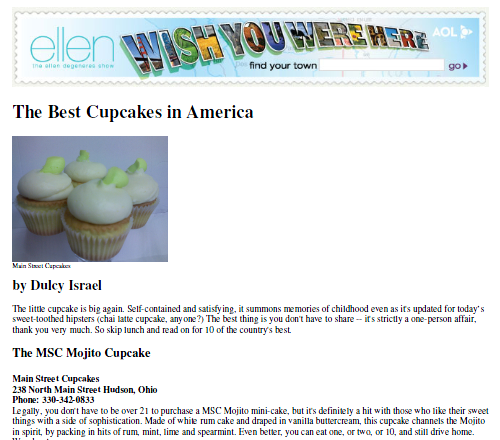 If we reduce page scaling in the original Inspire magazine PDF file on any of the “garbled images”, there is an address and timestamp, indicating the location of the file of the creator’s computer and the time at which the file was created.  This fact was first reported on by Marc Ambinder of the Atlantic, who noted that one of his readers had indicated that:

People who have Adobe Acrobat (not Reader) can download PDF (and no, it has no viruses), go to any page after 3 and open Document -> Crop pages menu. In the “Margin controls” replace 0.5 inches in the “Top” and “Bottom” sections with 0 inches. You will see that what was cropped out in the pdf are the page number (bottom) and this string (top):

Which means that the debris _was_ put into the file deliberately, and was present in the initial file from which it was printed (“ellenbca.pdf”).

However, Ambinder then goes on to say that this is likely just “adding debris” to the file.  It was then left up to a random commenter on Ambinder’s article to reveal on his personal blog that this “debris” is in fact a list of cupcake recipes.  We have confirmed that the debris is from the “Best Cupcakes in America” (ellenbca.pdf) file by a simple comparison of a hex dump using any hex editor with the “garbled image” pages of the Inspire magazine PDF.  We have put together the following image to better highlight this process and demonstrate the identical nature of the two files by selecting long, easily identifiable strings of code. 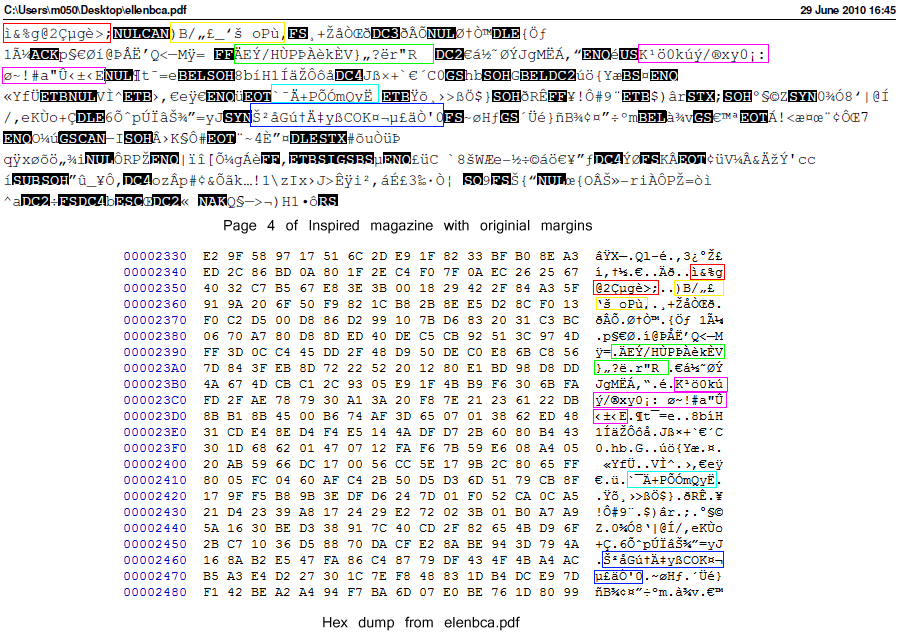 Click on the image to view a larger version.

Analysis provided to Public Intelligence indicates that the file does not contain any known viruses, when run through a total of 32 anti-virus programs. Processing the file with PDFiD reveals that the file contains no JavaScript objects, but it does contain a single JS object.  Despite this, typically infected PDF files display much more positive identifications of active content.

In order to aid in further analysis of the files, we are providing the following items for download: 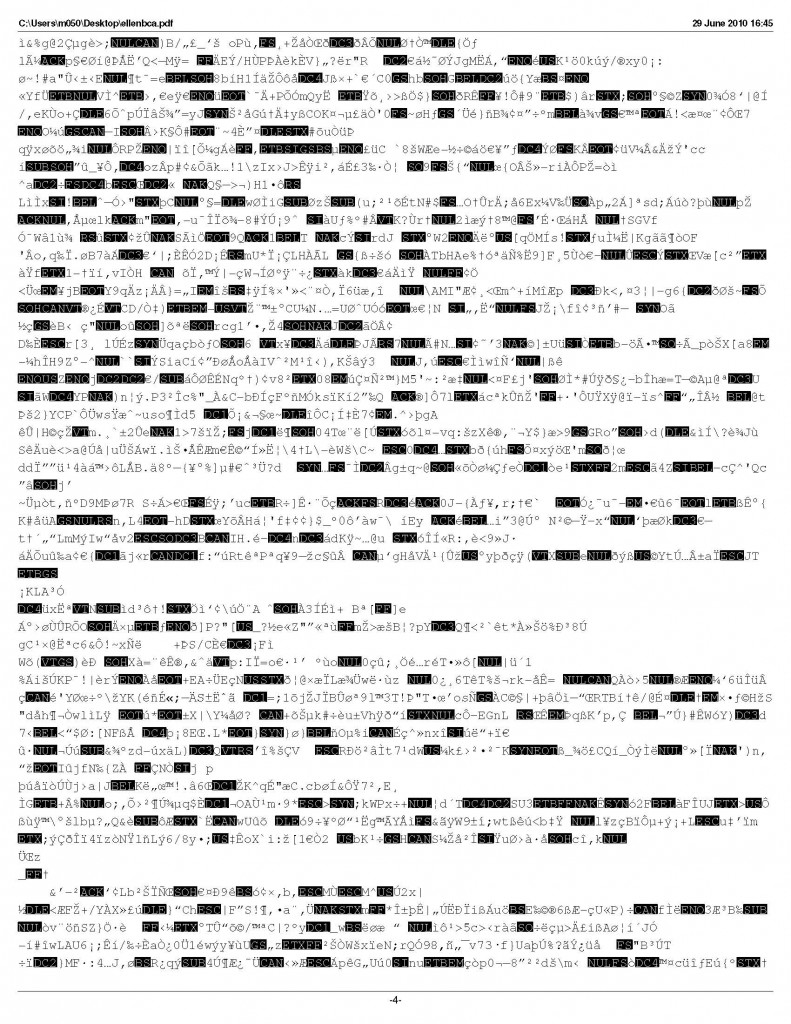 Page 4 of the "Inspire magazine" with margins extended.