Due to recent problems with authorities in the Netherlands, we would like to again remind the reader that this information is provided for informational, educational and research purposes. We would also like to draw the attention of those who dislike us posting such information to the excellent website Jihadology, which is the source of this document. That site and others like it have never been accused of being anything but helpful. 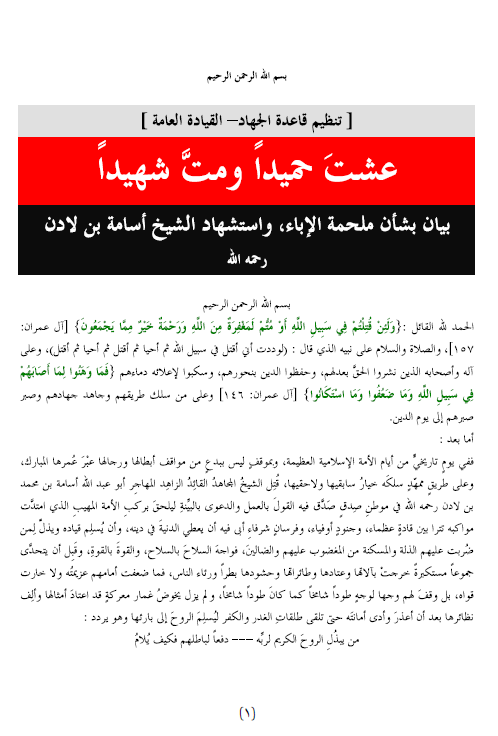 Al-Qaeda statement calls the day ” a historic day of the days of the great Islamic umma (nation) and in a noble stand of one of its great men and heroes across its blessed age and on the path taken by the will of all the mighty predecessors and those who will follow them, the Sheikh, the Mujahid & the Commander, the pious migrant fighter, Abu Abdullah Osama bin Muhammad bin Laden, may God have mercy on him was killed in a place where truth shines and where sincerity for good deeds and the call for truthfulness exist. Bin Laden was killed so he can follow the mighty caravan of the umma (the nation) with the great leaders, the loyal soldiers, and the honest knights who refused to abandon their faith for the mundane lives and to hand over the command to those who will be humiliate them and be humiliated and that’s why they confronted the weaponry with weaponry, force with force and accepted to challenge the arrogant masses that came out to fight with their killing machines, equipments, aircrafts and forces boastfully so they can be seen as men, and still this didn’t weaken their resolve and didn’t drain their strength, but instead he stood up for them face to face, a mighty mountain, a proud mountain and he was still in the midst of the battle that many got used to and his eyes were used to its sceneries but after that, he was yet to be excused and delivered his message and then he was shot bullets of betrayal and blasphemy delivering his soul to its maker while repeating: ‘Who sacrifice the blessed soul for his Lord to fight off the falsehood CANNOT ever be blamed’.”

“Congratulations to the Islamic Nation on the martyrdom of their devoted son Osama,

Even when the Americans managed to kill Osama, they managed to do ONLY that by disgrace and betrayal. Men and heroes only should be confronted in the battlefields but at the end, that’s God’s fate. Still we ask, will the Americans be able thru their media outlets, their agents, their instruments, soldiers, intelligence services and their might be able to kill what Sheikh Osama lived for and was killed for? How far! How impossible! Sheikh Osama didn’t build an organization that will vanish with his death or fades away with his departure.

In this context, we in al Qaeda Jihad organization promise God Almighty and we ask Him for help, support and steadfastness to continue on the path of jihad that our leaders, led by Sheikh Osama chose, and that we will not be reluctant, and will not deviate from that honorable path until God be the final judge between us and our enemy.

We also stress that the blood of the mujahid sheikh Osama bin Laden, may God have mercy on him is VERY dear to us and more precious to us and to every Muslim from being shed in vain and this blood (OBL’s blood) will be a curse that will chase the Americans and their agents, a curse that will pursue them inside and outside their country, and soon – with God’s help – we pray that their happiness turns into sorrow and may their bloods mix with their tears and let Sheikh Osama’s resonate again that “America will neither enjoy nor live in security until our people in Palestine live it and enjoy it. The soldiers of Islam in groups and as individuals will continue to plan and plot without any fatigue, boredom, despair, surrender or indifference until you receive from them a cunning misfortune that will gray the hair of the child even before he gets old.

We call upon our Muslim people in Pakistan where our dear Sheikh Osama was killed on their soil to rise up and revolt so they can cleanse this disgrace that was brought upon them by a handful of traitors and thieves who have sold everything to the enemies of the Muslim nation, and disregarded the feelings of this great Muajhid (Pakistani) people and let them rise up and start a massive public uprising to cleanse their country (Pakistan) from the filth of the Americans who have wreaked havoc in the land”.

Al-Qaeda chimes in to OBL’s body controversy and tells its supporters that OBL had one more message for them.

“The sheikh (OBL) didn’t leave this world before taking part in sharing the joy with his Muslim Umma (nation) regarding its revolutions when the nation has risen in the face of injustice and the tyrants and may God have mercy on him, the sheikh recorded an audio message one week before his killing that we will release soon, God willing and his audio message included a congratulation greeting, advices and a guidance. He ended his audio message with the following verses:

Saying the righteousness to the tyrants is the splendor & the gospel.

You can die a slave if you wish or die a free man, this is your choice.

Moreover, we warn the Americans of any injustice to be made to the corpse of Sheikh Osama, God’s mercy be upon him or that he will be mistreated in any despicable manner and this warning includes the mistreatment of any member of the sheikh’s honorable family whether they are dead or alive and that the bodies must be handed over to the families because any inappropriate treatment will open the doors of double evil and you will only be blaming yourselves for your own deeds. We call upon all Muslims to do their duty in enforcing this right.”