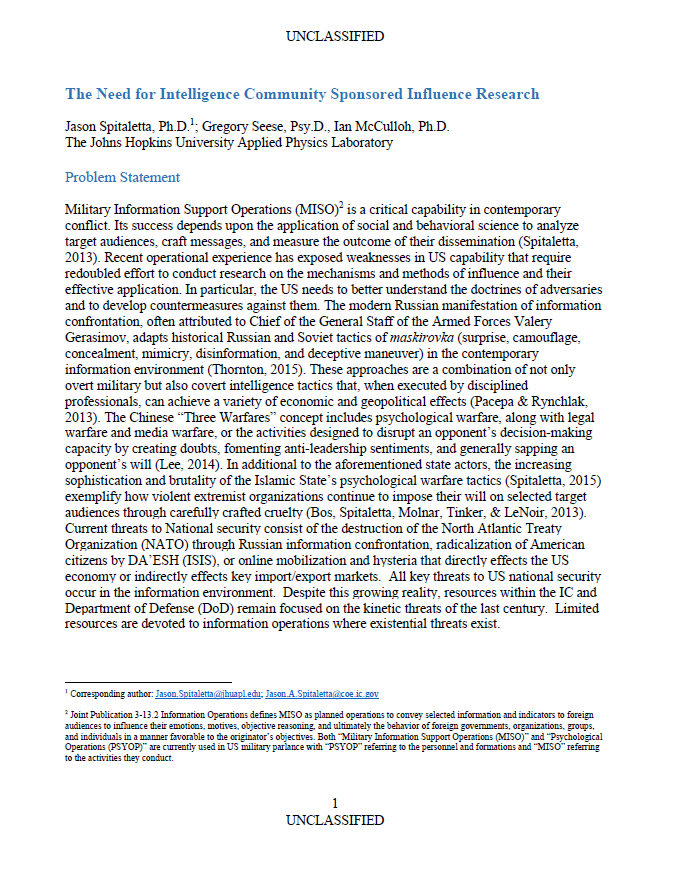 Military Information Support Operations (MISO) is a critical capability in contemporary conflict. Its success depends upon the application of social and behavioral science to analyze target audiences, craft messages, and measure the outcome of their dissemination (Spitaletta, 2013). Recent operational experience has exposed weaknesses in US capability that require redoubled effort to conduct research on the mechanisms and methods of influence and their effective application. In particular, the US needs to better understand the doctrines of adversaries and to develop countermeasures against them. The modern Russian manifestation of information confrontation, often attributed to Chief of the General Staff of the Armed Forces Valery Gerasimov, adapts historical Russian and Soviet tactics of maskirovka (surprise, camouflage, concealment, mimicry, disinformation, and deceptive maneuver) in the contemporary information environment (Thornton, 2015). These approaches are a combination of not only overt military but also covert intelligence tactics that, when executed by disciplined professionals, can achieve a variety of economic and geopolitical effects (Pacepa & Rynchlak, 2013). The Chinese “Three Warfares” concept includes psychological warfare, along with legal warfare and media warfare, or the activities designed to disrupt an opponent’s decision-making capacity by creating doubts, fomenting anti-leadership sentiments, and generally sapping an opponent’s will (Lee, 2014). In additional to the aforementioned state actors, the increasing sophistication and brutality of the Islamic State’s psychological warfare tactics (Spitaletta, 2015) exemplify how violent extremist organizations continue to impose their will on selected target audiences through carefully crafted cruelty (Bos, Spitaletta, Molnar, Tinker, & LeNoir, 2013). Current threats to National security consist of the destruction of the North Atlantic Treaty Organization (NATO) through Russian information confrontation, radicalization of American citizens by DA’ESH (ISIS), or online mobilization and hysteria that directly effects the US economy or indirectly effects key import/export markets. All key threats to US national security occur in the information environment. Despite this growing reality, resources within the IC and Department of Defense (DoD) remain focused on the kinetic threats of the last century. Limited resources are devoted to information operations where existential threats exist.

MISO has historically based its methods on scientific findings. In practice, however, deviations from science-based methods have lessened the effectiveness of MISO (MacKay et al, 2012) and thus a common refrain is to incorporate more theory and analytic findings into the process (Reynolds & Lyle, 2013; DiEullis, Casebeer, Giordano, & Wright, 2014; Giordano, 2016; Spitaletta, 2016).

It is explicitly stated in US Psychological Operations (PSYOP) Doctrine (FM 3-05.301) that Target Audience Analysis (the psychological and behavioral profiling of foreign groups and individuals) is the cornerstone of effective MISO. Yet this is an area that has consistently been identified as inadequate (Lamb, 2005; Munoz, 2012; MacKay et al, 2012; McCulloh et al, 2017; Tatham, 2015).

HFA can be subdivided into three types of assessment; group and population analysis (GPA), social network analysis (SNA), and individual and leadership analysis. GPA can include social structures, stratification, and demographics, as well as the key institutions, governance, roles, culture, atmospherics, economic factors, and information networks. GPA should include not only formal structures and influences but also the unofficial, clandestine, and illicit. Social network analysis examines groups of humans within and beyond the social context of institutions. SNA enables human factors analysts to understand the strengths and vulnerabilities of different types of networks, how networks structures affect social processes, and the various roles individuals play with networks. Individual & Leadership Analysis examines the underlying human factors that affect how individuals manage their environment, process information, and make decisions (Spitaletta, 2016).

Operational influence requires a rich contextual understanding of the conditions specific to each operating environment as well as those key individuals whom the US would like to influence (Spitaletta, 2016). Understanding and applying this knowledge is necessary for both mass communication and personalized persuasion. HFA requires substantial funding to conduct surveys of various kinds. Individuals require proper training and background to conduct all of this work and in a fiscally constrained environment, organizations often lack the necessary budget to have the right people perform the right research with the requisite rigor.