April 2010 Coup in Kyrgyzstan: Context and Implications for U.S. Interests 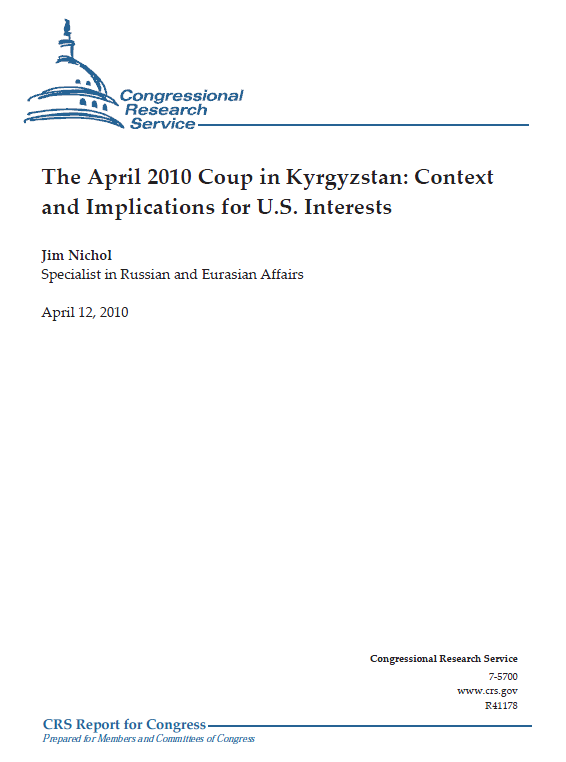 Kyrgyzstan is a small and poor country in Central Asia that gained independence in 1991 with the breakup of the Soviet Union (see Figure A-1). It has developed a notable but fragile civil society. Progress in democratization has been set back by problematic elections (one of which helped precipitate a coup in 2005 that brought Kurmanbek Bakiyev to power), contention over constitutions, and corruption. The April 2010 coup appears to have been triggered by popular discontent over rising utility prices and government repression. After two days of popular unrest in the capital of Bishkek and other cities, opposition politicians ousted the Bakiyev administration on April 8 and declared an interim government pending a new presidential election in six months. Roza Otunbayeva, a former foreign minister and ambassador to the United States, was declared the acting prime minister.

The United States has been interested in helping Kyrgyzstan to enhance its sovereignty and
territorial integrity, increase democratic participation and civil society, bolster economic reform
and development, strengthen human rights, prevent weapons proliferation, and more effectively
combat transnational terrorism and trafficking in persons and narcotics. The significance of
Kyrgyzstan to the United States increased after the September 11, 2001, terrorist attacks on the
United States. The Kyrgyz government permitted the United States to establish a military base at
the Manas international airport outside Bishkek that trans-ships personnel, equipment, and
supplies to support U.S. and NATO operations in Afghanistan. The former Bakiyev government
had renegotiated a lease on the airbase in June 2009 (it was renamed a transit center), in
recognition that ongoing instability in Afghanistan jeopardized regional security. The lease is up
for renewal in July 2010. Otunbayeva has declared that the interim government will uphold
Kyrgyzstan’s existing foreign policy, including the presence of the “transit center,” although some
changes to the lease may be sought.

Cumulative U.S. budgeted assistance to Kyrgyzstan for FY1992-FY2008 was $953.5 million
(FREEDOM Support Act and agency funds). Kyrgyzstan ranks third in such aid per capita among
the Soviet successor states, indicative of U.S. government and Congressional support in the early
1990s for its apparent progress in making reforms and more recently to support anti-terrorism,
border protection, and operations in Afghanistan.