ATF Assessment: Use of Natural Gas as a Terrorist Weapon in Apartment Buildings 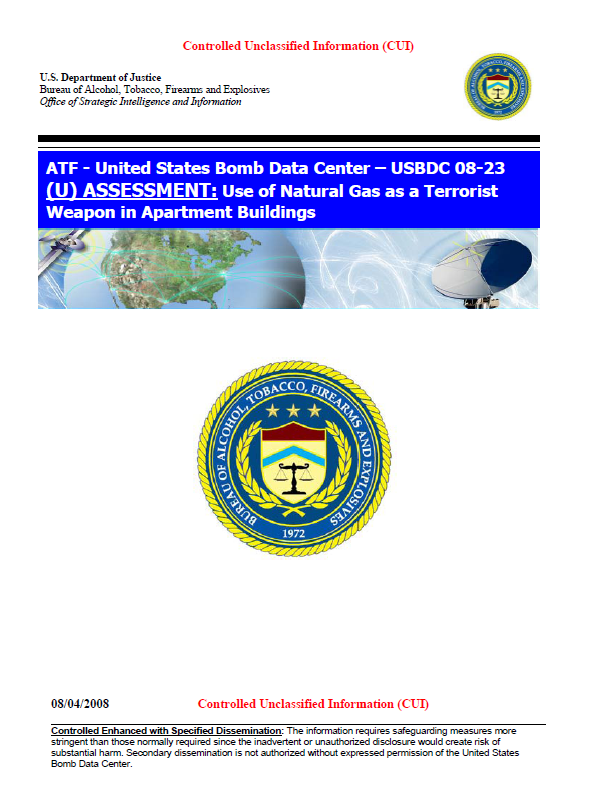 (U) January 2008, Jose Padilla was sentenced to a term of 208 months’ incarceration after being convicted in the U.S. District Court for the Southern District of Florida of conspiracy to murder, kidnap and maim individuals in a foreign country, conspiracy to provide material support to terrorists, and providing material support to terrorists. Padilla first came to light May 2002, when he was arrested as a material witness subsequent to his arrival at Chicago’s O’Hare International Airport carrying over $10,000 in U.S. currency and a number of other incriminating items.

(U) At a June 2004 press conference, then Deputy Attorney General James Comey outlined the case against Jose Padilla, the so-called “dirty bomber” suspect, and his connections to al-Qaeda.1 Jose Padilla gained notoriety for the alleged plan to use a radiological dispersal device (RDD). However Padilla’s plot to utilize natural gas to blow up apartment buildings in the United States did not seem to draw as much attention as the plan to utilize a RDD. There has been very little discussion pertaining to his plot to cause a catastrophic fire/explosion event at apartment buildings using natural gas.

(U) On or about December 2005, Binyam Ahmed Muhammad was charged by the U.S. Military Commission, Naval Station Guantanamo Bay, Cuba with conspiring with Jose Padilla and others.2 Muhammad, an Ethiopian national who immigrated to the United Kingdom as a teen, was arrested on or about April 10, 2002 at the Karachi, Pakistan airport while attempting to get to London using a forged passport.

(U) Padilla, a U.S. citizen and former street gang member, formally converted to Islam in 1994 at the al-Imam mosque in Florida.3 He eventually found his way to Afghanistan in 2000. While there, Padilla underwent basic terrorist training at the al-Qaeda training camp, al-Farouq. His training included instruction in the use of firearms, topography, communication, camouflage, clandestine surveillance and explosives as well as other al-Qaeda tradecraft.

(U) In 2001 at the urging of his al-Qaeda mentor, Padilla and Muhammad agreed to undertake terrorist missions in the United States to blow up apartment buildings utilizing natural gas. He, along with Muhammad, received advanced explosives related training with instruction on electrical circuits, switches and timers, as well as how to seal an apartment filled with natural gas in such a way as to provide a maximum yield.4 5

(CUI) Padilla and Muhammad discussed with Abu Zubaida6, a key al-Qaeda recruiter and operational planner with an idea of detonating a radiologic device in the United States as well as a number of other plots. Abu Zubaida believed the use of a radiologic dispersal device (RDD), also referred to as a dirty bomb, would be more feasible and encouraged Padilla and his accomplice to pursue this operation.

ANALYSIS OF THE APARTMENT EXPLOSION PLOT

(CUI) An apartment building is an extremely soft target, often with little to no security measures in place. There would be a high probability of casualties, which by design would strike fear into the American people by bringing the fight to the very homes they live in.

(CUI) Padilla’s plot leaves many unanswered technical questions. To be considered: how to adequately seal the apartments; cause a natural gas flow at an appointed time; and use a timedelay device to initiate an ignition source to achieve the desired effects.

(CUI) If the idea of the plot is to cause death and destruction on the same scale as had occurred in Russia, then Padilla’s methodology comes into question. The probability of causing this magnitude of death and destruction using natural gas would be considerably lower. This is not to say that this would be impossible, but there are a number of events that would have to occur to achieve a similar effect.

(CUI) The primary question is how to time the ignition when the optimal fuel-air mixture has been reached to cause maximum effect. To accomplish this Padilla would have to have a working knowledge of natural gas, fuel delivery systems, gas fired appliances and electronics.

(CUI) On the surface, the idea is simplistic, if not amateurish. Seal an apartment, create a natural gas flow, and connect a timer to an ignition source. However, the probability of an efficient fuelair explosion is low. If the timer functions too early in this sequence, the probability of igniting the gas is greatly reduced, as the fuel-air mixture will be too lean. The same results could occur if the timer functions late in the ignition sequence, as the fuel-air mixture will be too rich. 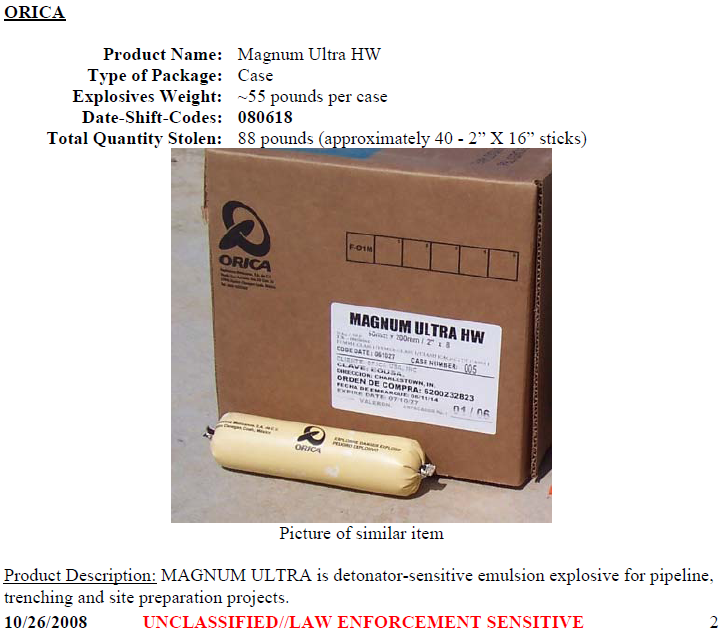 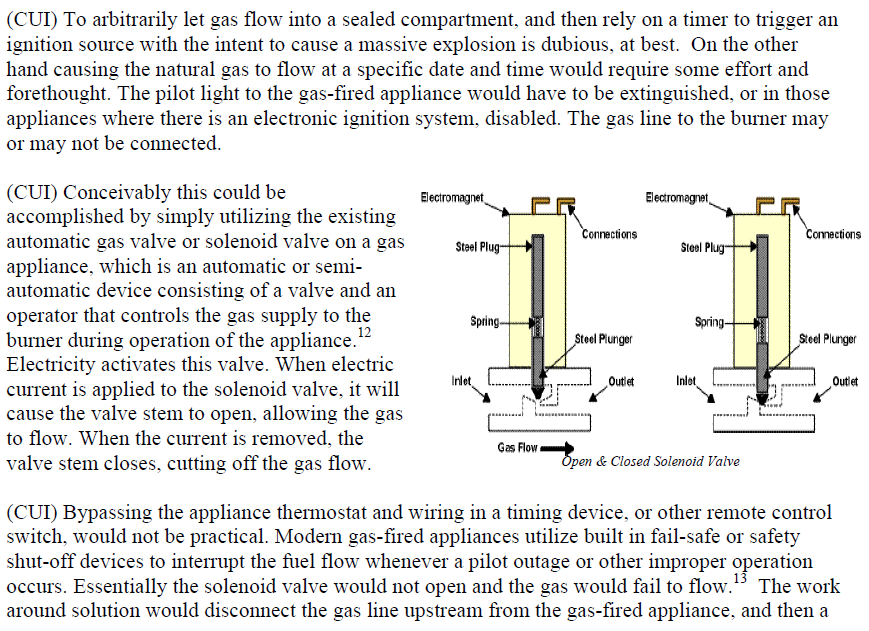