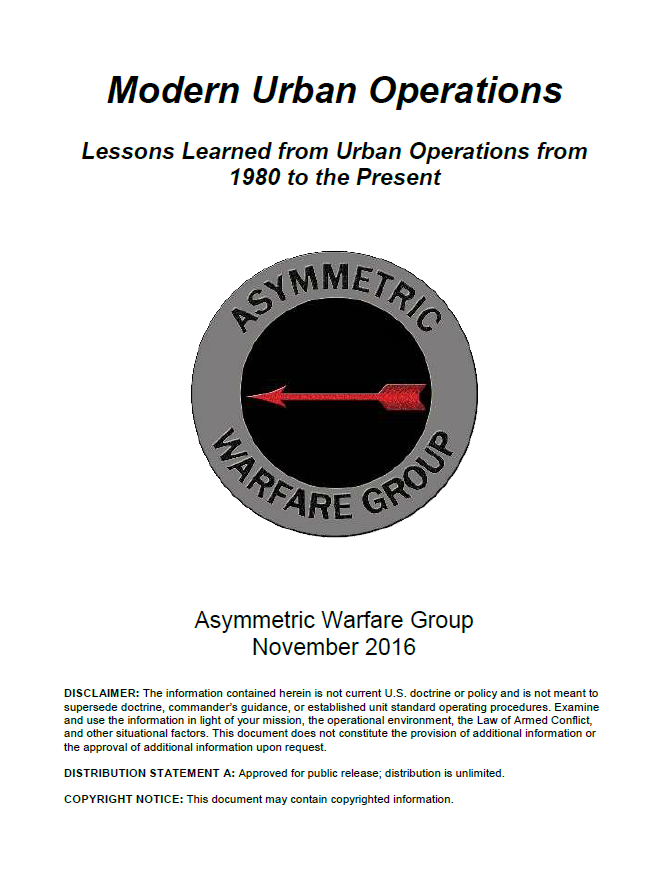 To illuminate best practices to execute urban operations in Iraq, AWG identified lessons learned from modern urban warfare from 1980 to the present. AWG’s lens was similar to JFCOM’s 2004-06 joint experiment Urban Resolve: “How can [the U.S. Army] fight in urban terrain against an intelligent, determined, well-equipped adversary and win quickly without unacceptable casualties to ourselves or our allies, unacceptable civilian casualties, or unacceptable destruction of infrastructure?” To that end, AWG looked at the following examples:

The Ukrainian revolution in February 2014 resulted in the ousting of pro-Russian Ukrainian president Viktor Yanukovych. Shortly after, on 27 February, the Crimean peninsula was occupied by “unmarked” Russian troops and later annexed as part of the Russian Federation. Russia used political protests in the Ukraine to affirm their position to protect ethnic minority Russians living abroad. Following the annexation of Crimea, rebel factions in Donbass and Luhansk, backed by regular Russian forces, attempted to gain more autonomy within Ukraine. This led to a “de-facto” civil war in Ukraine, with the Donetsk People’s Republic and Luhansk People’s Republic forces, backed by Russian forces, engaging regular Ukrainian forces for control of their areas. During two years of fighting, the most intense urban combat between Ukrainian and Separatist/Russian forces has occurred in the city of Donetsk, with the airport a central engagement zone between the two forces. There have been two “battles” or periods of intense fighting on this key terrain, with the second being the most decisive and resulting in Ukrainian forces withdrawing to Pisky, outside of the city. Adaptations and adjustment of tactics were seen on both sides, with the Ukrainian forces severely unprepared for an open military conflict at the onset of the war. Russian forces and their separatist counterparts created a modern day adaptation of hybrid warfare, integrating newer Russian technologies into their strategies to test new systems and tactics. While the conflict is still ongoing, the Second Battle of Donestk Airport in 2014 displayed the most modern example of hybrid warfare in an urban setting.