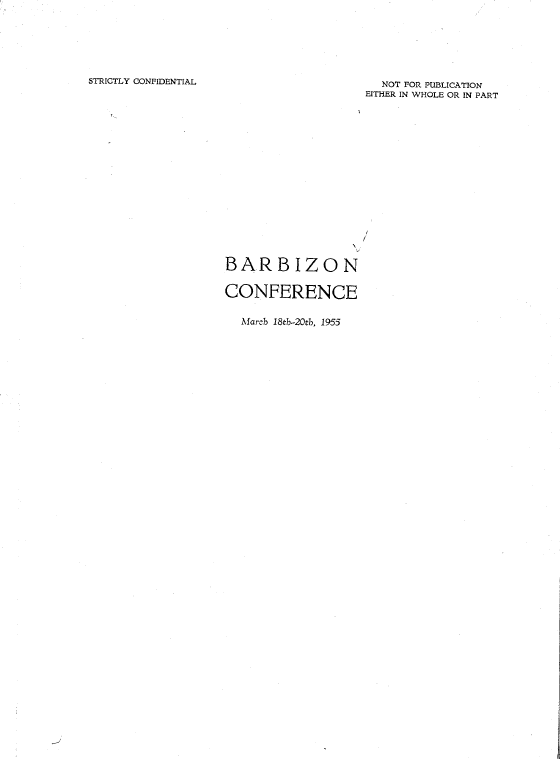 The Conference which was held at Barbizon on the 18th, 19th and 20th of March, 1955, was the second of its kind, the first having taken place at Bilderberg, in Holland, in May of the previous year. Both owe their origin to a group of men of good-will and international or national repute who voluntarily came together some three years ago to work for the removal of misunderstanding and possible suspicion between the countries of Western Europe and the U.S.A., in the face of the dangers which beset the world. It is not the purpose of these conferences to attempt to make policy or to  recommend action by governments. Their sole object is, by bringing together men of outstanding qualities and influence in circumstances where discussion can be frank and arguments not always used in public debate put forward, to reach a better understanding of prevailing differences between the Western European and North American peoples and to study those fields in which agreement may be sought.

This organisation was, and remains, entirely unofficial, the costs of its activities being defrayed by private subscription. Those invited to attend its conferences have been chosen from many different nations and from all fields of public activity. They include statesmen and politicians; diplomatists, business and professional men; intellectuals, leaders of labour organisations and leaders of public opinion. All, however, share a high purpose; a desire to work for others than themselves or their particular countries alone, and a sense of the urgency of the situation. The views which they express in their speeches or in discussion are their own and they do not in any way represent their countries, their political parties, or any association or organisation to which they may belong.

The Barbizon Conference, like its predecessor at Bilderberg, was called together by H.R.H. The Prince of the Netherlands, who presided over it. It was attended by participants coming from 13 different countries and met in an atmosphere of close friendship and mutual confidence.

The subjects discussed at Barbizon were:-

I. Survey of Western European-U.S.A. relations since the Bilderberg Conference.

A. Political and Ideological Aspects

Discussion of Item III, which covered the Western European and American approach to communist propaganda, was based on four papers, two by Europeans and two by Americans. It was perhaps inevitable that discussion should reach beyond the limits of Western European-United States relations set out in the agenda, a development which not only served to stimulate it but which also provided a valuable stocktaking of the Western position vis-a-vis the East, against which the relations of the Western Allies could be studied in perspective.

In order to allow participants to speak with perfect frankness with the assurance that their words would not be read outside the Conference circle, the Chairman asked for the utmost discretion. The press was not admitted to the Conference and the speakers’ names are not included in this document, which should be treated as strictly confidential and personal.